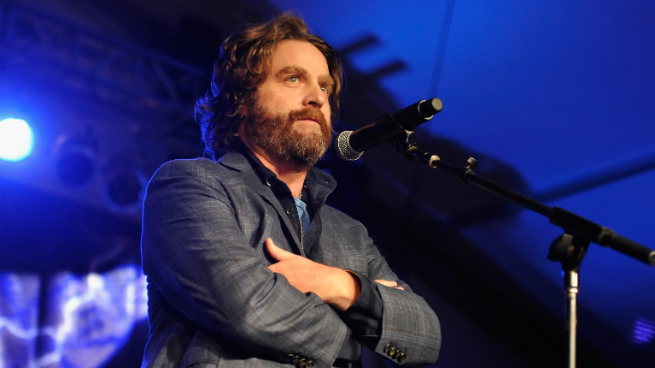 About a month ago, FX made the sad decision to not go forward with a Charlie Kaufman–written/directed/executive-produced pilot starring John Hawkes, Michael Cera, Sally Hawkins, and Catherine Keener. Fortunately that wasn’t even close to the only power project happening at FX, and, double fortunately, the network has ordered 10 episodes of Baskets, a single-camera series starring Zach Galifianakis. The show is cocreated by Galifianakis, Louis C.K., and Portlandia’s Jonathan Krisel.

Krisel, if you don’t know him by name, not only cocreated Portlandia, he has directed and cowrote all 37 episodes to date, he’s also a cocreator/writer/director at Comedy Central’s Kroll Show, and he did time at SNL. (He’s also working on Jay Baruchel’s FX series, Man Seeking Woman.) He’ll serve as showrunner on Baskets and he directed the pilot, which he cowrote with C.K. and Galifianakis. Krisel and Galifianakis worked together on Cartoon Network’s Tim and Eric Awesome Show, Great Job!, while C.K. and Z.G. are teaming up for the first time. Baskets is part of an overall FX development deal for C.K., who just won a comedy-writing Emmy for his work on Louie’s fourth season.

So, yeah: Baskets seems worth getting crazy-excited about, even if, knowing FX and the wide spread of hyperspecific comedies it puts out, we have no idea what the final product will be like till we see it. We do have a synopsis, though, courtesy of the press release:

In a world constrained by corporate interests and the homogenization of society, one man in Bakersfield, California dares to follow his dream of becoming a professional clown. But after an unsuccessful enrollment at a prestigious clowning school in Paris, the only job he can find is with the local rodeo. Baskets follows Chip Baskets’ pursuit of his dream, against all odds, to be a respected clown.

Galifianakis, of course, plays Baskets. The show will premiere in 2016, which should be more than enough time for him to strong-arm C.K. into a recurring role, or at least a cameo. Obstinate, Southern-accented rodeo boss, maybe? Fellow clown, even?! We’ll see.

The most thrilling part of this pickup might not even be that we’re probably about to get a great new show. It’s that we’re about to get Zach Galifianakis back. He’s done plenty of Hangovers and Due Dates and Dinner for Schmuckses and Will Ferrell political comedies, and now it’s time for something completely focused on the excellence that is him, in his creative element. Bored to Death died too soon; here’s hoping Baskets takes off.

What About the Movies? Accounting for the Cinema of ‘SNL’