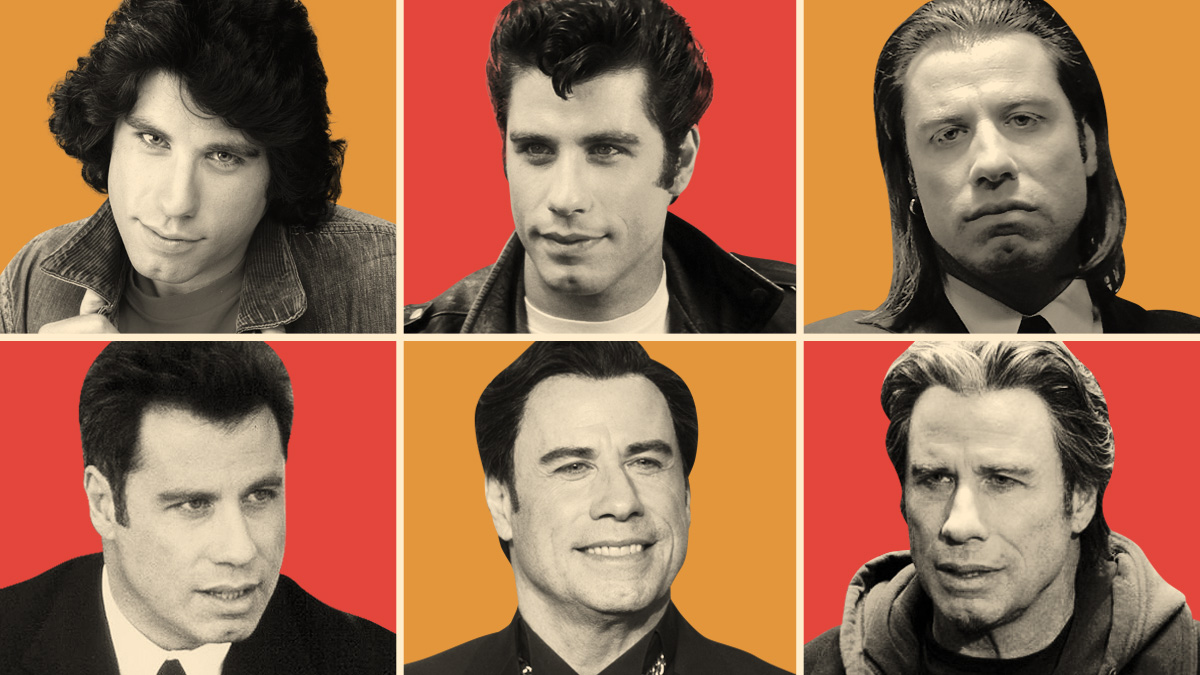 John Travolta was a god once — a white-suited, perfectly coiffed deity strutting among men. Now, he is a guy commonly described as “weird” or “creepy” or [body shiver]. What happened?

Let’s start at the beginning. Take a walk with me.

This is Travolta as Tony Manero, helpless dancer, in 1977’s Saturday Night Fever. He is 23 years old when the movie comes out. Travolta is already a television star due to his roles as Vinnie Barbarino on Welcome Back, Kotter and as a boy in a plastic bubble in the 1976 TV movie The Boy in the Plastic Bubble. But Fever makes Travolta a megaton sex symbol at possibly the greatest time in American history for being a megaton sex symbol. He is nominated for an Academy Award and loses to Richard Dreyfuss, who wins for his performance in The Goodbye Girl. But Travolta wins the test of time — more than 37 years later, people will still be talking about Saturday Night Fever, while The Goodbye Girl withers on Dreyfuss’s IMDb page.

Now, it can be hard to truly see what’s happening in this scene. It is shrouded in a fog of subsequent allusions and parodies. Travolta might as well be Robert Hays in Airplane!, Mark Wahlberg in Boogie Nights, or Jason Segel in Freaks and Geeks. So, instead of focusing on Travolta, it’s instructive to look at the crowd watching him. Director John Badham wants you to notice the crowd — he cuts to it throughout, and frames his shots so the observers loom on Travolta’s periphery.

See how worshipful those people are? It’s not that Travolta is the most acrobatic dancer ever. He resorts to a lot of finger-pointing and crotch-thrusting. But it’s fun to look at him and at the people onscreen who are also looking at him. It’s a feedback loop of pleasure reflecting back pleasure.

Travolta winds up as perhaps the biggest movie star in the world for the next four years. His next film, 1978’s Grease, becomes the highest-grossing picture of his career, and 1980’s Urban Cowboy and 1981’s Blow Out shore up his reputation as a dramatic actor. Then he makes 1983’s Staying Alive, a misbegotten Saturday Night Fever sequel directed by Sylvester Stallone. Staying Alive is the All That Jazz/Rocky III body-switch movie nobody asked for. It does solid business, but the critics hate it, and the climactic “Satan’s Alley” sequence is fun to look at only in the train-wreck sense.1

Staying Alive doesn’t merely end Travolta’s winning streak — it effectively erases the goodwill accrued from that streak in the minds of filmgoers. All of a sudden, Travolta is the Bee Gees after Disco Demolition Night at Comiskey Park. He is Neil Young going from Rust Never Sleeps to Trans and entering an extended Reagan-era wilderness period.2 He is no longer what he was. Later in ’83, Travolta reteams with his Grease costar Olivia Newton-John for Two of a Kind, and it’s even worse than Staying Alive.3 Two years later, Travolta stars in Perfect as a Rolling Stone reporter working on a story about fitness clubs being the singles bars of the ’80s. He is not fun to look at in this movie. Rather, he is weird and creepy and [body shiver].

Perfect bombs, and Travolta doesn’t make another feature for four years. He rebounds with Look Who’s Talking, playing third fiddle to Kirstie Alley and Bruce Willis, who plays a talking baby.4 Two sequels follow. The megaton sex symbol days seem long gone, but then, one year removed from the talking-baby threequel, Travolta is cast in another movie with Willis, who this time plays a talking boxer. It is called Pulp Fiction, and it is directed by Quentin Tarantino, who remembers how audiences used to love watching people who are watching Travolta dance. So that’s what Tarantino does in his movie. Because it’s the ’90s and Travolta is loose and electric again, like Ragged Glory.

A lot happens after that, but for now let’s skip ahead 21 years to the trailer for Travolta’s upcoming film, The Forger. It might as well be a trailer for any Travolta film from the past several years. That confounding hairy gumdrop on Travolta’s chin is comparable to his dumb facial hair in 2010’s From Paris With Love, in which he resembled Bernard Kerik after a Guy Fieri makeover. That inscrutable accent (Boston? Brooklyn? Psychlo?) is reminiscent of Travolta’s stab at a Bosnian dialect in 2013’s Killing Season. (Travolta’s facial hair in that movie is pretty stupid, too.) In The Forger, Travolta once again plays a weary, untrustworthy S.O.B. who arouses suspicion in those around him, just as he did as a corrupt federal agent in 2012’s Savages. On the bright side, Travolta’s character doesn’t have an idiotic neck tattoo, like in 2009’s The Taking of Pelham 1 2 3. But I don’t rule out a surprise third-act inking.

Most actors are vessels for the plot contrivances of storytellers and the aspirations of the audience. We all want Jennifer Lawrence’s moxie, Leonardo DiCaprio’s magnetism, and George Clooney’s chin. Travolta is different. He’s a mirror. He always reflects back how the audience sees him. When Travolta is adored onscreen — whether it’s by the patrons at the 2001 Odyssey disco or the excitable ’70s pop culture junkie behind the camera — we are more likely to enjoy watching him. Conversely, when Travolta is reviled in the culture, it seems to coincide with him being a little uglier in his films. 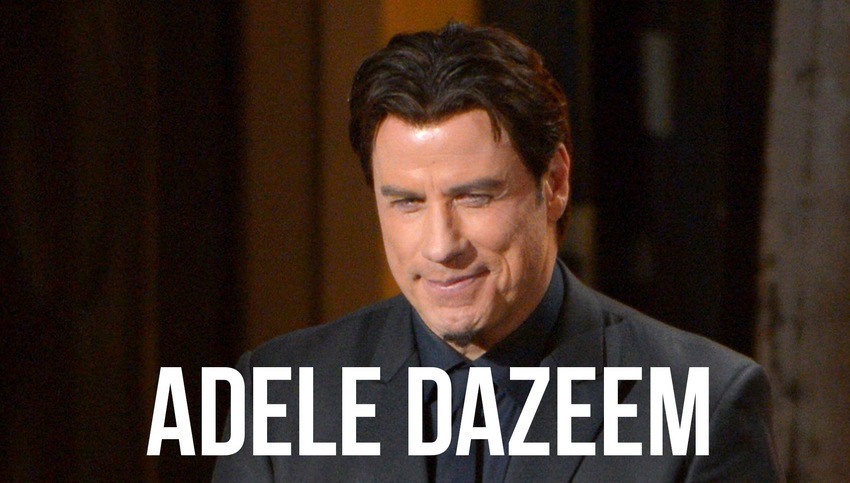 The simpler, more practical explanation for Travolta being perceived as a weirdo creep is his alleged weirdo creep behavior offscreen — the face touching, the face kissing, those allegations about unseemly touching on land and in the air. Then there’s the patina of strangeness that surrounds Scientology. It’s especially evident around Travolta, who even more than Tom Cruise now appears to be The Man In The Cult-Constructed Bubble. Clearly the waxy, awkward figure Travolta now cuts has overshadowed the hip-swinging paragon of cocksure coolness he once signified.

I don’t think it’s a complete coincidence that as our view of Travolta has taken a turn toward the odd and discomfiting, so have his roles. For some reason, John Travolta can’t stop embodying the repellent version of himself onscreen that we’ve come to imagine in real life. He keeps giving the people what they don’t want — it’s been more than six years since a Travolta film grossed more than $100 million.5 And this has further fueled the public’s weirded-out imagination.

Let’s go back to Saturday Night Fever and Pulp Fiction. What Travolta had in those movies that he hasn’t had lately is female costars. Set his private life to the side for now: Travolta doesn’t spend much screen time with women anymore, and this has undermined his movie-star allure. In his prime, Travolta romanced Karen Lynn Gorney, Olivia Newton-John, Debra Winger, Jamie Lee Curtis, Uma Thurman, Rene Russo, Robin Wright, and Joan Allen. Women were lovers, sparring partners, coconspirators, and sounding boards for Travolta. They were also his best audience — women loved being charmed by John Travolta, and their affection made him glow in his films.

Travolta’s recent ingenues include Taylor Kitsch, Jonathan Rhys Meyers, and a limping, decrepit Robert De Niro. Killing Season ends with Travolta sharing a drink with a darkly beautiful and buxom bartender, but the movie fades out before he can whisk her out onto the dance floor. I assume you haven’t seen Killing Season — it grossed just under 40 grand (not million, grand) — but trust me, it could have really used a nice dance-floor whisk.

Just watch this scene with Russo from 1995’s Get Shorty. Travolta is Chili Palmer, a prototypical wiseguy-with-all-da-angles. Chili is the most purely appealing role of Travolta’s career — his job is to be the coolest and most composed guy in the room, and Travolta crushes it. With Russo, however, he softens. Chili makes her the center of attention, and his tender movie-geek enthusiasm delights Russo’s character — and, by proxy, the viewer.

In spite of his sex symbol status, Travolta has played surprisingly few romantic leads. Grease is the only time Travolta really went for it in that regard, and it’s his most commercially successful film. In the ’90s, however, Travolta’s comeback relied on his ability to credibly seduce women as a function of his characters’ power — he did it to Thurman in Pulp Fiction, Russo in Get Shorty, Allen in Face/Off, and Allison Janney (among others) in Primary Colors.

Women have not only made Travolta more likable, they’ve also made his beliefs seem a little less insane. Consider the two Travolta films most informed by Scientology: 1996’s Phenomenon and 2000’s Battlefield Earth. In Phenomenon, Travolta plays an auto mechanic who is struck in the head by a UFO and subsequently achieves a mental state that resembles a romanticized version of the Scientology concept “Clear.” It’s a little — here’s that word again — creepy, but Travolta’s messianic posturing in Phenomenon is humanized by the love of Kyra Sedgwick, as well as soft-focus photography and Aaron Neville’s velvet alien cooing.

In Battlefield Earth — technically an adaptation of only half of L. Ron Hubbard’s 1982 novel, so count your blessings — Travolta is Terl, a brutal humanoid slave driver tasked by his Psychlo overlords with keeping legions of oppressed person drones in line. Feeling romantic yet? Spoiler alert: Nobody lines up to lovingly shave Travolta’s face in this movie. Terl laughs a lot in Battlefield Earth, but nobody is happy.

Things might’ve turned out differently for Travolta if he just had better luck. His recent choices don’t look bad on paper. It wasn’t the worst idea to star in a remake of one of the great ’70s NYC-based crime thrillers with Denzel Washington and under the reliably commercial direction of Tony Scott. (If only Travolta’s role didn’t require him to shoot innocent people at point-blank range.) It wasn’t a total miscalculation to make an action film with the director of Taken that winks heavily at Travolta’s role in Pulp Fiction. (If only Rhys Meyers had one-tenth of Samuel L. Jackson’s swagger.) It was possible that an Oliver Stone movie about the drug trade costarring that good-looking kid from Friday Night Lights could have been a hit. (If only Savages hadn’t come out the same year as Kitsch’s turns in John Carter and Battleship.)

But even if you explain away Travolta’s recent commercial slump, there’s no excusing his artistic output. What was the last John Travolta movie that was any good at all? I’ll cop to enjoying From Paris With Love and Savages, though I wouldn’t describe them as “good.” I suppose the Hairspray remake has its partisans, and I guess people like Wild Hogs? Otherwise this century we’re left with … Swordfish? Domestic Disturbance? The Punisher? Is anyone basic enough to defend Basic?

There is some hope. I’m optimistic about the forthcoming In a Valley of Violence, a revenge Western written and directed by talented genre-film auteur Ti West, in which Travolta plays a character referred to only as The Marshal. Given that the plot synopsis reads like a riff on High Plains Drifter, I’m guessing that’s another villain. Travolta loves playing the villain these days — he’s said that he’ll stop pursuing bad-guy roles if he ever gets a shot at playing the bad guy in a Bond film. But while In a Valley of Violence might solve Travolta’s “bad movies” problem, I wonder if it will make him seem like a real movie star again. West is part of the generation that grew up loving Travolta during his post–Pulp Fiction salad days. I hope whatever affection West has for Travolta shows up in the movie. I want to enjoy watching him again, and feel that joy reflected back at me.