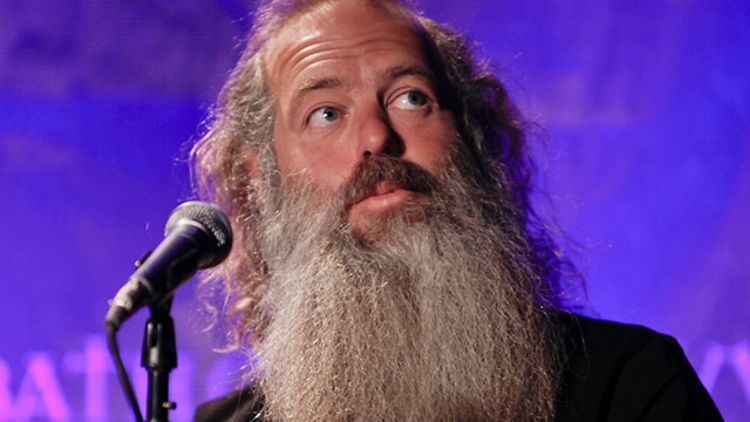 Rick Rubin, the most successful and best-known producer, quite possibly, of all time, has spent the past twenty-plus years, consciously or otherwise, cultivating an aura. You know it well: He’s the ably-bearded mystic, a soft-carpet enthusiast, a supernatural diviner of classic cuts. He’s not here to twiddle the knobs; leave that to the linearly minded engineers. He’s here to reach into your soul and yank out something you never even knew was there.

Calling him a recluse might be a bit of overkill. But ever since the early Def Jam days, he’s retreated into himself, and the studio — he lurks in the shadows, a happily ineffable conduit between the artists and that nether-zone where the hits come from. You know those second-hand tales from awed rock bands about sipping green tea at his Malibu mansion while he rewires your whole damn brain? That’s a big part of the appeal of the whole Rick Rubin experience. Which is why it’s strange to see him, since Yeezus, so out and about, carefree and loose, just granting interviews left and right.

Partially, that’s the Kanye effect. Rubin’s never really stopped producing big albums — I mean, he’s only two years removed from Adele’s 21, and that thing only sold like a billion copies — but it’s been years since he’s been caught up in this kind of maelstrom. The thing that gets stuck in your craw, though, is how willing Rubin’s been to pull back the Wizard of Oz curtain. The way he’s now explained it multiple times: Kanye came to him with hours of unfinished material, weeks before the album was due. And Rubin stepped up and did what had to be done. In a long Q&A with The Daily Beast from Thursday, he elaborates:

What did the album sound like at that point?

Kind of meandering, unfocused, usually without his vocals. I assumed that the album was scheduled to come out next year. So I said, “When are you thinking of finishing up?” And he said, “It’s coming out in five weeks.” Like completely confident and fine.

Did he realize how much more work it needed?

To me it seemed impossible what he was asking. I remember I wasn’t feeling that well that day, and I was thinking, Is the music making me sick? I don’t feel good about this. We ended up working probably 15 days, 16 days, long hours, no days off, 15 hours a day. I was panicked the whole time.

It’s a good thing you were on the same wavelength, because the sheer logistics of finishing the album must have been daunting.

Three days before Kanye had to turn the record in he tells us, “I’m going to Milan tonight.” There are probably five songs that still need vocals at this point. Two still need words! So he says, “I have to go to this baby shower before I go to Milan. I’ll be back at 4 p.m., and from 4 to 6 I’ll do the vocals. Then I have to go.” I say, “OK,” thinking it’s not OK, and he says, “Don’t worry. I’ll score 40 points for you in the fourth quarter.” Again it just seemed impossible, but that’s basically what he did. He didn’t come back until after 4, and we probably didn’t start until after 5. He said, “I have an hour and 10 minutes. Let’s go.” And then it was full-on NBA finals [laughs]. It probably ended up taking two hours. Five vocals. He wrote two lyrics on the spot.

When he came to you with the record, did you have a sense of what needed to be done?

Initially, he thought there were going to be 16 songs on the album. But that first day, before he even asked me to work on it, I said, “Maybe you should make it more concise. Maybe this is two albums. Maybe this is just the first half.” That was one of the first breakthroughs. Kanye was like, “That’s what I came here today to hear! It could be 10 songs!”

Certainly not helping is the Jay-Z Samsung commercials that Rubin’s popping up in. I mean, first and foremost, you gotta blame the man in the middle: I know I could just wait a week and actually listen to Magna Carta Holy Map on the Back of the Constitution before making up my mind that it’s a tone-deaf self-important disaster — but that wouldn’t be as much fun, would it? Still, though: How hard would it have been for Rubin to duck into the back room for a few hours while they were shooting? That’s what Rick Rubin does! He hangs out in the back! Where the actual shit goes down!

The funny thing is, way back when, before New Age Rick, when him and Russell were still boys, Rubin was happily ubiquitous. Back then, he was a classic downtown hustler: playing in punk bands, throwing illegal NYU dorm-ragers, politicking with the power players at Danceteria. You could catch him lamping in press photos with the Beastie Boys or rocking to LL Cool J in Krush Groove. He basked in it.

Eventually, apparently, that stopped being fun. Maybe after the Beasties left Def Jam, bristling at Rubin’s public portrayal as their Svengali, it left a sour taste in his mouth. Maybe he just had his fill of being out front. So maybe this is just a blip I’m reading way too much into. Or maybe he’s reverting, just the tiniest bit, into the old Rick.

Rembert Explains America: One Special Purchase at the World's Largest 'As Seen on TV' Superstore