Rembert Explains America: One Special Purchase at the World’s Largest ‘As Seen on TV’ Superstore 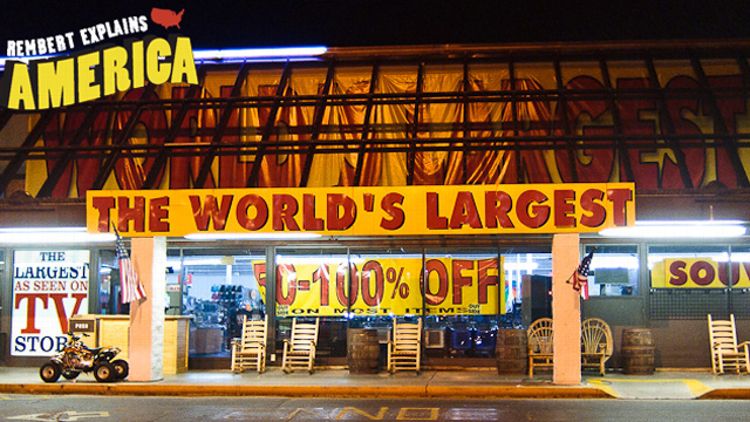 The tagline for Dollywood, Ms. Parton’s country-strong Great Smoky Mountain Epcot, is “The Experience.” It’s an appropriate catchphrase, bordering on modest understatement. Because of what I knew about the attraction, as well as the things I didn’t, the pull toward this highly inauthentic display of Southern amusement and revelry was magnetic on a Thursday afternoon, prompting a sudden two-hour detour toward Pigeon Forge, Tennessee.

I never made it to Dollywood, though. I got close, but in an odd turn of events, it was Dolly’s hometown that derailed my visit to the Master Blacksmith. And the Master Wood Carver. And, of course, Doggywood.

Driving through the town, six miles from Dollywood, on, yes, Dolly Parton Parkway, a behemoth of a strip mall presented itself. And in that strip mall, the most puzzling store I’ve ever seen.

The World’s Largest “As Seen on TV” Superstore.

Pulling into this largely empty parking lot, my mind raced as I thought about what would be inside, and why in heaven’s name this gigantic store existed. My entire thought process as I parked the car:

Wait, so the products that are sold on television informercials that you’re supposed to then buy over the phone or, increasingly, online, because you’ve actually convinced yourself you need a steak knife that doubles as an AM/FM waterproof radio, now has a physical location, cutting out the middleman of phones or Internets, a.k.a. it’s just a real store selling merchandise that you see on TV, which is pretty much the same as every other store that has commercials — wait wait wait, is “As Seen on TV” a brand, oh my god it absolutely is.

Before I walked in, just for giggles, I Yelped the place. To my surprise, there was a review.

My excitement was at 11. It was time to shop.

The best way to describe the items in this place: It seemed as if half the store was merchandised by an “As Seen on TV” brand manager and the other half by someone desperately trying to get rid of everything in their life that no longer works, has value, or is edible.

You’d walk a few seconds and see this:

And it makes sense. Yes, of course there’s an upside-down hot pepper planter that you remember because you saw it on television. But then, a few steps over:

Everything on this table was priced, including the 50-cent wicker basket filled with dusty broken car parts that smelled like tetanus.

Again, some of it made perfect sense. Like that lady wearing the Snuggie that you’ve come to know and love from seeing on TV, as well as her cousin wearing the Soft N’Fleecey Wearable Blanket that you’ve had many a smile over because you’ve seen her on TV.

It’s what you expect to see in the World’s Largest “As Seen on TV” Superstore. This, not as much:

I’ve just never seen “As Seen on TV” confederate flag hats. But I’ve not seen all of television.

For every “As Seen on TV” Magic Mesh Hands Free Screen Door, there’s this:

And for every “As Seen on TV” Men’s and Women’s Miracle Hair Grow Cream, there’s this:

Hermit crabs. The classic “As Seen on TV” catch, however: There were no hermit crabs.

After completing my rampant picture-taking, loitering, and audible chuckling, my time here was done. I had to buy something, though. Amid my disrespect, I had to show some sense of appreciation for this suburban Dollywood gem.

So I bought the only appropriate item in the store.

No, not this printer:

It was only right.