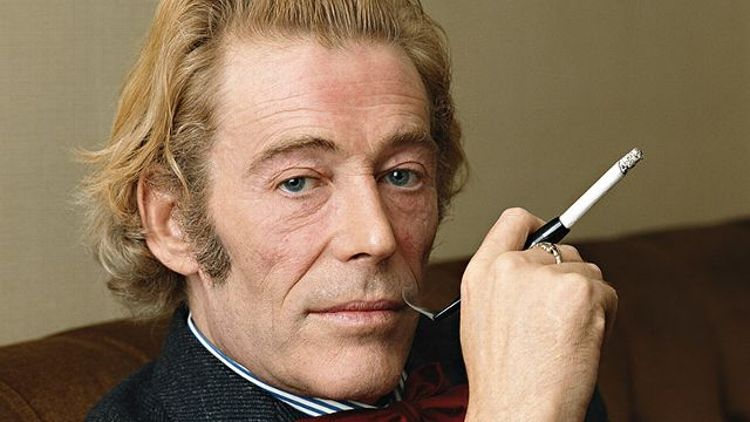 One doesn’t typically look at a classically trained, highly skilled stage actor and focus on a single physical feature barely visible from the middle of the house. But Peter O’Toole didn’t become a movie star just because of all that training and talent. He became a star in David Lean’s Lawrence of Arabia because he spent the better part of four magnificent hours in and out of the desert and what you remember amid all that sand are his glittering eyes.

By 1962, the movies were still treating color as a special occasion — for musicals and massive spectacles. O’Toole’s face qualified as a spectacle. In a film situated in the Arabian desert, eyes that blue were a double tease: hypnotic, yes, but mostly because they looked hydrating, two tablets of relief in a tall-drink-of-water body. By the time the movie is over, you don’t know whether to applaud or stick a straw in him.

O’Toole, who died Saturday at 81, spent his film career cool like that. He was never quite the major movie star he might have been 20 years before. He became instantly famous just as film acting began to change from the theatrical to the instinctive, from Laurence Olivier to Marlon Brando. The introspective ways of the Method weren’t for O’Toole. He didn’t do interior. He was an externalist. His brashness and panache bridged old-Hollywood entitlement with new-Hollywood naturalism. With him, you never forgot he was performing. It’s been reported that an 18-year-old O’Toole once wrote, “I will not be a common man. I will stir the smooth sands of monotony. I do not crave security. I wish to hazard my soul to opportunity.”

And so he did little that seemed safe. To say that O’Toole could have been a bigger star in the 1940s assumes that he would have been willing to behave by the standards of the era. He was born Irish and reared in England, and his fine-boned handsomeness always seemed to run up against basic propriety. It is no secret that O’Toole drank. There’s a wild insobriety to most of his movie acting — in both the excellent work (in Becket, say, or The Lion in Winter) and the embarrassments — the young actors in 1979’s barely directed, cult disaster Caligula, for example, often appeared to be propping him up. There was an uncouth undercurrent with him that was exciting. It was as if he didn’t respect the material even as he acted up a storm. In Becket, his Henry II slouched upon the throne. In The Lion in Winter, opposite Katharine Hepburn, you’re nervous that his beard will fall off. But he would’ve kept going anyway.

The 18-year-old O’Toole’s aforementioned notebook entry was intriguingly vague: What sort of opportunity? The kind that wins acclaim? His eight Best Actor Oscar nominations make him the most nominated actor never to win. Out of hubris, he famously perseverated in public about whether to accept a lifetime achievement Oscar in 2003 before finally acquiescing. Could he have anticipated hazarding his soul for the opportunity to get paid? O’Toole’s only rival in the business of “What film won’t he say ‘yes’ to?” is Michael Caine. In the early 1980s, he gave three acclaimed performances, in The Stunt Man and My Favorite Year and in the ABC miniseries Masada. What followed were parts in Supergirl, Creator, Club Paradise, High Spirits, The Rainbow Thief, King Ralph, Phantoms, and more. But you don’t see a man acting for money in most of these films. You see an actor getting a workout. If the price is a couple of Razzie nominations for Supergirl and Club Paradise, so be it.

O’Toole spent the 1970s and 1980s bedeviling Johnny Carson and David Letterman with erratic behavior. His social circle included such great alcoholic thespians as Richard Burton, Peter Finch, Robert Shaw, and Richard Harris. These men were in their 30s and 40s when the Beatles and Rolling Stones began to conquer the world. But the rowdy public template for how famous men comported themselves had been established by actors like them. In nearly every early O’Toole performance was a touch of rock-and-roll iconoclasm. He’s the spiritual grandfather of men like Robert Downey Jr. and Johnny Depp.

In a sense, O’Toole always seemed both modern and outside modernity. He played a lot of kings, dukes, earls, and generals. In the 1970s, he seemed transported from the 1930s. And in the big costume films, that sense of slouchiness gave an edge to his acting. T.E. Lawrence in Lawrence of Arabia was his first big movie part, and he’s in almost every scene, and aside from his eyes, you’re struck by his eccentric physicality. O’Toole was 6-foot-2 and could seem frail and dancerly, but only occasionally was that height something he used. Even when he was standing fully erect, he seemed sideways.

That Oscar remained elusive because he was often up against showier, more gonzo, more immediately iconic work — landmarks of one sort of another. O’Toole was given to ruminative tickling, not galactic tumult. He lost to Gregory Peck in To Kill a Mockingbird, Rex Harrison in My Fair Lady, Cliff Robertson in Charly, John Wayne in True Grit, Marlon Brando in The Godfather, Robert De Niro in Raging Bull, Ben Kingsley in Gandhi, and Forest Whitaker in The Last King of Scotland. In other words, he was more unlucky than out-and-out robbed.

In The Stunt Man, he plays a mysterious action-adventure director. Part of what’s fun about the role is the casual majesty he brings to every syllable of every line. We never understand what the character is up to. Not really. He’s just veddy, veddy English. One scene involves a kind of come-on to Steve Railsback, who plays the title character, while sitting on a production crane that whirls and jerks all over the place. The entire time you’re thinking, Why is he riding that crane like that? Who’s operating it — or why, really? And isn’t he a little nervous, especially when he reaches out and pulls Railsback onto the seat beside him, that he might slide off?

Not Peter O’Toole. He made everything look so easy, so seductively unserious. Whether he was riding camels in the desert or riding that crane around a film set, it was all Shakespeare to him. It was all action-adventure.

Matthew Perry's Trying to Revive The Odd Couple for CBS

SNL: John Goodman Gets in the Holiday Spirit in His 13th Hosting Turn