SNL: John Goodman Gets in the Holiday Spirit in His 13th Hosting Turn 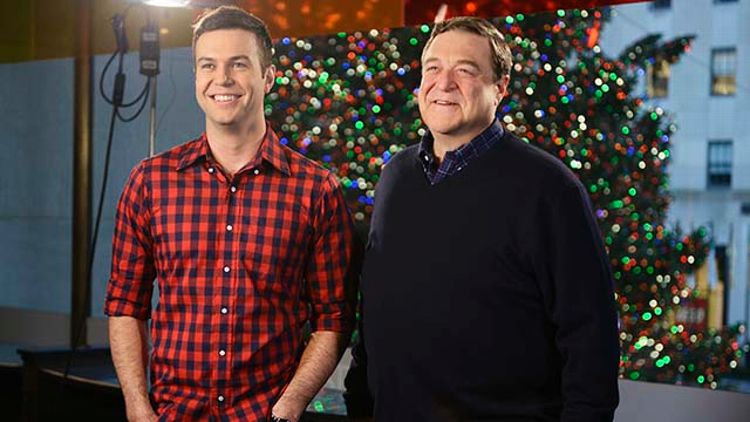 John Goodman took his 13th turn as host on SNL this weekend in the second-to-last episode of the year. While this episode wasn’t the strongest (and was the second in a row to feature a joke about whistles — what does it all mean?), it wasn’t by any means a disaster, and so far the 39th season has been a smooth transitional period, even though some of the new cast members (and there are so many of them!) haven’t had much time in the spotlight in the past three months. (Speaking of new cast members, last week Lorne Michaels told the New York Times that the show had been actively scouting for a black female performer to join its cast, and that it planned to add one “or as many as two” as early as next month.)

It’s been 12 years since Goodman last hosted (with musical guest Ja Rule); he also appeared for plenty of cameos in the late ’90s, often as Linda Tripp. Ah, Ja Rule and Linda Tripp. It really takes you back to a different time. It was safe to predict that Goodman would don a slinky dress, and that he would appear next to Drunk Uncle as his sudsy holiday-sweater twin one generation removed (and one round ahead). What I didn’t expect was that he’d be riding a camel between Robert De Niro and Sly Stallone, plugging Grudge Match, as the Three Wise Guys on their way to Bethlehem. I can’t say that sketch was all it was cracked up to be, but now I will forever define frankincense as something that “fell off the back of a dock.” Anyway, let’s start at the top.

How would you know it was a cold open if there wasn’t a Healthcare-dot-gov diss? I actually appreciated the way this sketch unapologetically threw a week’s worth of current events into the blender: Like Lemony Snicket, the president (Jay Pharoah) had recently “experienced a series of unfortunate events” at the Nelson Mandela memorial service, including “selfie-face-gate”, the Raul Castro handshake, and the sign language impostor, played by Kenan Thompson. Thompson’s interpretations — doing the “Thriller” dance for “thrilled,” and Spiderman web-shooting hands for “website” — added some oomph to Pharoah’s Obama, and it was nice to see Kate McKinnon return as German chancellor Angela Merkel (she wants her own selfie with the president, though she promises not to guten-tag it on Frassbük).

Goodman sang his monologue, outfitted in a wine-hued velvet jacket and assisted by Thompson. The two dedicated the song to their wives, whose booties they desired for the holidays. I guess it made sense for Goodman to warble the blues because — well, you know why — but I’d have preferred something a little more substantial, considering Goodman’s résumé and all of the material embedded in it (you know, Monsters, Inc., Argo, and “36 Coen brothers movies”).

The next sketch, a pretaped short, featured Bobby Moynihan’s Guy Fieri impression, a work of art that makes Guy Fieri seem like he’s doing a Bobby Moynihan impression. Featuring Kid Rock guzzling “Bud lime gazpacho,” Fieri’s “Full Throttle Christmas Special” features a cornucopia of Fieri friends (“the human equivalent of my food”) like Criss Angel (Kyle Mooney), Bret Michaels (Taran Killam), the Duck Dynasty beardfolk (Kings of Leon), Dog the Bounty Hunter (Goodman), and a masterful take on Big Ang by McKinnon. It all went by in a blur of loaded nachos and fruitcakes turned into straight cakes (a reference to this). The weirdest thing was that this was followed by a real commercial for a Diners, Drive-ins and Dives rerun fest. That’s all the proof I need. The Guy Fieri inception is complete.

This season has featured a lot of plays on the regional theater squirmies — remember Gaga as stage mom? — and this time we went inside the psyches of the performers in a community playhouse Christmas pageant. Their inner monologues were filled with last-minute regrets, but they danced on as big-grinning snowflakes despite their doubts. Goodman’s facial gymnastics were particularly well-employed here (as were Aidy Bryant’s), but the audience stayed a little bit ahead of the joke for most of its run. Not as much as we did in the next one, though. On a slow camel-plod to deliver gifts to Jesus in “The Three Wise Guys,” Goodman, De Niro, and Stallone wore tracksuits and tinted lenses while talkin’ mob talk. It seemed like such a good idea, but it was a very long commute (especially on camelback).

The Kings of Leon performed two tracks from Mechanical Bull, first “Temple” and then “Wait for Me.” The songs were solid, but there wasn’t anything surprising going on here other than seeing Caleb Followill in a pink cardigan and remembering how long it’s been since the band was known for how hard it partied. I guess you could party in a pink cardigan; it just didn’t look like it was happening on stage. This was a very straightforward set, but it didn’t seem like it suffered too much from the sound issues SNL has been having lately, so that’s good.

“Weekend Update” had three guests this week: Santa (Thompson), proving Megyn Kelly wrong about Santa’s race once and for all (“have you ever known a white man to wear an all-red suit?”), and Drunk Uncle (Moynihan) with his own Drunk(er) Uncle (Goodman). The Uncles came prepared to skewer yuppies (“is this tinsel grass-fed?”), their wives (like the health-care website, they “[don’t] work and [are] full of complaints”), and every ethnicity imaginable (“why is Santa so dumb? Because he’s North Polish”). Drunk Uncle will miss Seth, just like Jacob the Bar Mitzvah boy (Vanessa Bayer), but he has a little pause before he succumbs to a man-on-man hug.

Sometimes jokes based on the premise of a woman’s ugliness don’t really work out, but Goodman’s take on a lady suing her former employer for firing her because she was too hot was enough to make me forget my prejudice. He’s just so good at flirting. The performances in this one were great across the board: Beck Bennett as the grooving defendant, Killam as the incredulous defense attorney, Cecily Strong as a serious, be-turtlenecked prosecutor, and Thompson as the judge who was feeling on Goodman in drag from the get-go. It was almost a letdown to see Goodman change into suspenders for the next sketch, which revisited class troublemaker Shallon (Nasim Pedrad, last seen during Edward Norton’s hosting spot) during a fire safety lecture. It seemed like this sketch had some kinks to work out (funky timing and camerawork), but I like Shallon and miss seeing Pedrad take the lead in sketches.

Unfortunately, the “Hallmark Countdown to Christmas” was a wasted opportunity. Instead of listing the titles of fake holiday specials (Dean Cain in “My Neighbor’s a Magi!” and Tony Danza in a Rudolph nose for “On Dasher, on Danza”), it would have been nice to see some actual performances. But not necessarily performances like those belonging to the It’s a Wonderful Life spoof, which competed with a loud whistle swallowed by Bartholomew the angel (Killam). There were a few good lines in here (like when McKinnon points out that Goodman has to be able to stop the assault on the family’s ears, since he “seems to know the most about it”), but even if you yell as well as Goodman does, this was A LOT OF YELLING. The pretaped H&M music video was better, though sometimes Pharoah’s singing was overwhelmed by the music. I guess that works in the sense that H&M also overwhelms your thoughts with music, and setting foot in the giant anxiety attack of a store during a well-intentioned holiday shopping outing is a total nightmare. Props to Goodman for his realistic struggle with H&M denim. I relate.

For the final sketch, we got a reboot of “Donnelly’s,” which you probably remember from when Louis C.K. hosted — it’s memorable, in part because it features its host and McKinnon eating each other’s faces. “Donnelly’s” is reliably great because it sits on such a good premise: two barflies at the end of the night, sauced and lonely and kind of gross. Goodman’s prosthetic beard was sprayed with whipped cream, which McKinnon lapped off of it; he hawked up a peanut (and then fed it to her) and engaged in a conversation about “the pick gravel they put on vomit in schools” (huh? Now I’m not even sure I heard that wrong, but there it is in my notes and I can’t ignore it). It was “derousing” to the max, even before McKinnon made cat orgasm noises while being motorboated, but I feel like its charm will never wear off for me.

While Goodman gave it his all, the script didn’t quite rise to meet him (at least until the final five minutes). Still, it’s been a good first half of the season and next week (with power duo of host Jimmy Fallon and musical guest Justin Timberlake) will probably be a strong finish before the hiatus even if we have to bid good-bye to Seth Meyers.