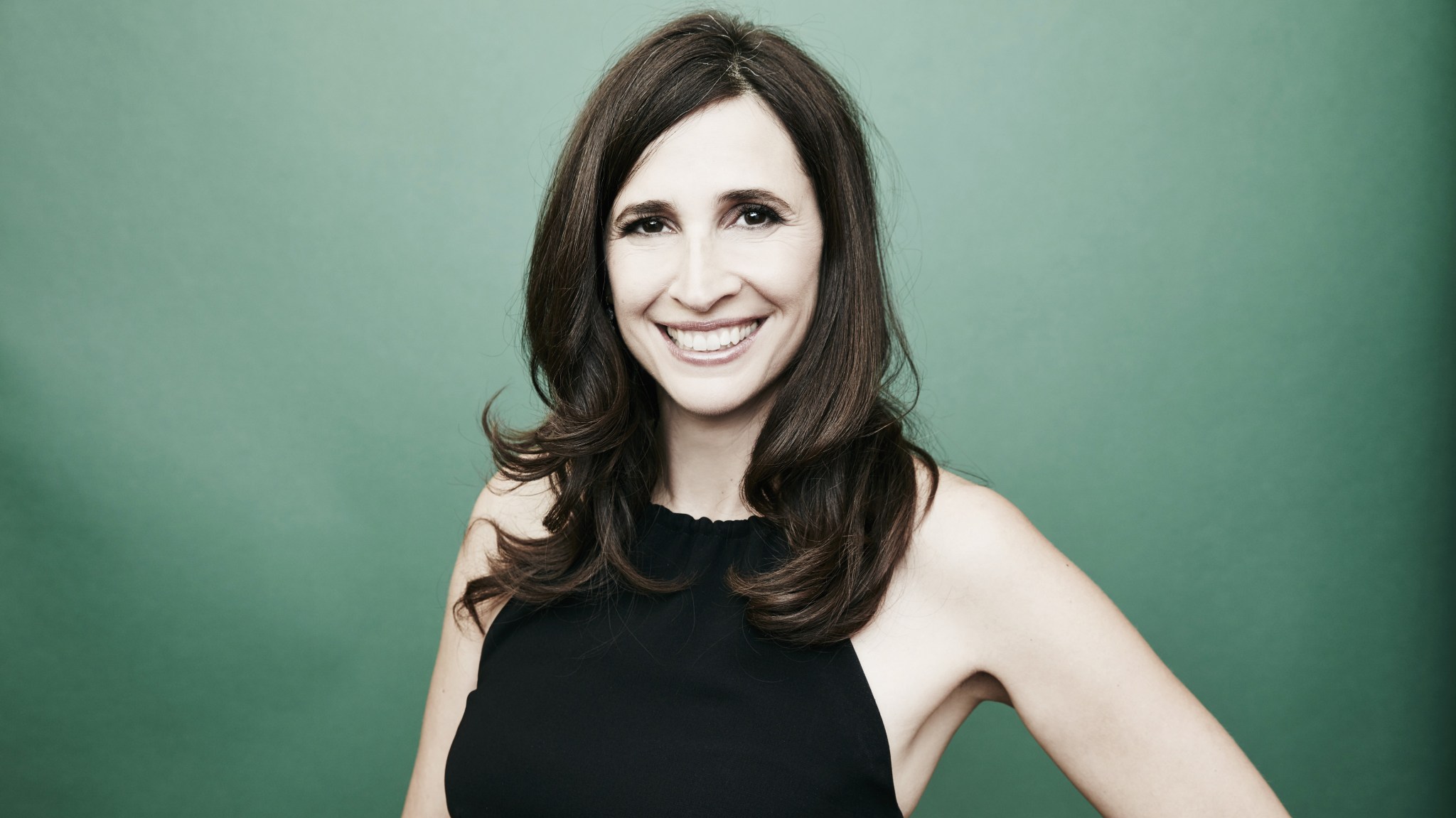 On her new Hulu series Casual, Michaela Watkins plays a recently divorced single mother in Los Angeles named Valerie so mired in soul-crushing ennui and so irrevocably stuck in neutral that she chooses to move in with her smirking cad of a brother, who just happens to own a popular online dating app. In the real Los Angeles, Watkins is far more put together than her sad-sack character. Recently married and headlining her first TV show, there’s a certain joy that radiates off of her when I greet her at the LAMill coffee shop in Silver Lake. That happiness is interrupted only when we have to figure out what to order.

“Why is it always a muffin as the go-to? Like, Oh, I’ll just have a muffin. As if we don’t have 90 other choices in our world,” she says.

“There’s just a lot of muffins in L.A. It’s a muffin town. Some towns are doughnut towns. This is a muffin town,” I respond, as though I had recently taken a poll of Southland residents’ snack preferences.

I throw up my hands and request croissants. It’s a very L.A. conversation. Watkins, along with longtime collaborator Jill Soloway and writer/director Nicole Holofcener, represents a very specific Los Angeles archetype through the characters she plays — the bohemian, casually neurotic Eastsider. Basically, the kind of person who’ll have a nice kvetch over a muffin, but isn’t going to fret over it for very long because, Chill out, man, it’s just a pastry.

The 43-year-old actress has traveled quite a distance from the days following her one-and-done dismissal from Saturday Night Live, an emotional story she told in great detail last week on Marc Maron’s WTF podcast.1 “When SNL goes, you’re like, I don’t know if I’ll ever have another job that exciting,” she tells me. “When Benched, my [USA Network] series that I had with my friend Damon Jones, got canceled, I was like, What a bummer. I don’t know if I’ll have something I care that much about. And then Trophy Wife got canceled and I was like the same way — I’ll never like anything as much.”

Benched, a legal sitcom about a corporate lawyer forced to become a public defender,2 was Watkins’s first series as cocreator and showrunner, a dry run for assuming the immense responsibility of carrying a show. Back then, the burden was behind the scenes, but now she’s also the face on the poster. Like most people thrust into that precarious position, she took a lot of inspiration from watching someone else do it. “When I was doing New Adventures of Old Christine, I watched Julia Louis-Dreyfus, and I just said to myself, If I ever have a show, I want to run it like Julia. If I’m ever the lead of a show, I want to be like Julia.”

You could pick worse role models than one of the most talented comedic actors of her generation. Because of their similar skill sets, it seems especially fortuitous for Watkins to have Louis-Drefyus as a mentor and guiding star.3 They both have a knack for playing the woman who seems calm on the outside but is hiding the fact that they’re just barely holding it together. “I always love to play people who are just — they’re … whatever’s going on underneath has just started to break through, because once it breaks through it’s less interesting to me,” she says.

Our food finally arrives. I quickly realize I ordered a croissant the size of a Buick. “Now I’m just intimidated by this,” I stammer. “By the croissant?” she asks in a voice tinged with genuine concern. I fumble with my utensils and do what I can to steer the conversation away from my burgeoning food-related panic attack. The subject of her career leap to colead on Casual comes up.

“My agents sent a script. I read it quickly, because it was Jason Reitman, who was going to produce and direct, and I was like oh! right away. Like, the first couple of pages I was like, This is different.” Different is a bit of an understatement. Valerie’s brother Alex, played by Mindy Project alum Tommy Dewey, tags along with her on dates and knows the kind of intimate details about his sister’s love life that should probably stay secret. The pilot opens with Dewey’s character accidentally catching a glimpse of Valerie’s daughter having sex in his hot tub. Instead of the horrified reaction we’d expect one to have when seeing their niece in a compromising position, he comes off as curious in a childlike way. It’s our first sign that this family is not totally normal. In later episodes, it’s revealed that Valerie and Alex came from a sexually adventurous, permissive household that screwed them up for years. In response to that trauma, they formed their own nontraditional family unit.

As we eat, I ask Watkins about her own childhood. Her parents were divorced when she was a teenager and her mother moved the family to Boston from Syracuse, New York, when she was 15. She describes her relationship with her parents as good, but often amusingly uncommunicative. “This is my dad’s reaction to everything I ever do. I could be like, ‘Dad, I got SNL.’ Or, ‘Dad, I’m on fire.’ And he would always respond the same: ‘Uh-huh.’ That’s it. Like, ‘Oh-kay.’ So [when he found out about Casual] I was like, ‘Good talk.’”

She says she “did bad things” as a child, but not to force her parents to pay attention to her, as do many teenagers struggling with their parents’ separation. “I was trying to grow up as fast as I possibly could, because I think in this weird way, I wanted to hurry up and grow up so I could create my life to look like the way I wanted it to be. And I think that’s what Valerie does.”

Friends of Watkins pop by the table to say hi. Silver Lake is one of the rare neighborhoods in Los Angeles where you’re guaranteed to run into someone you know at a coffee shop. It’s teeming with blue-collar actors, the type who jump from job to job and possess the “that guy” or “that woman” quality in which passersby know you, but they don’t know you. That’s a class that Watkins is primed to graduate out of post-Casual. I ask how often she still has to audition for parts. “I’m not precious about not auditioning. I feel like if it’s mine, then I’ll get it, and if it’s not, then I won’t. But I don’t mind auditioning. Believe me, I’d rather someone called and offered me stuff, but there’s something that also happened in the audition room for [Casual], which wouldn’t have happened, which is, I suddenly wanted to do it really badly.”

It was the presence of Reitman that made her truly covet the part of Valerie. “It was working one-on-one with Jason in that audition room that I could go, Goddammit, now I really, really, really want it. Because I liked this dialogue, I liked the way he talks and I like the way he directs and I like the sensitivity. He’s really visual and emotional and technical. Even in the audition he was directing. Like, ‘You stand more here, let’s move.’ In an audition, he was directing.”

As much as she wanted the gig, it took time to seal the deal. “I was the very first person to read for the role, so right away I knew that I was not going to get it, because as good a job as you may have done, there’s a billion people who are in line next to you, so imagine if you’re on a speed-dating thing and you’re a guy and there’s a line of women out the door. Are you going to be like, ‘I think we’re good,’ at the first one? No. But I’d heard that that session, I was one of the people that he really liked, but I also heard they were having more sessions, and they did. They had more, and they had more, then I heard that, ‘Well, since this is a new show, they’re out to this person, they’re out to this,’ you know, insert fancy name, and then I thought, Oh, it went away. Well, it’s fine. And luckily I had other little things that I was thinking about, so I let it go, but then I ran into Jason at some event, and he said, ‘Oh, hey Michaela, I just wanted to let you know that I thought you did a really great job,’ and I was like, I know how it is, you know? We’re going to do that Hollywood game. So I said, ‘OK, sure, I understand.’ I’d rather hear that than, ‘Hey, Michaela, I thought you were fucking awful, but they’re making me use you.’

It’s around this point that I realize I’ve almost eaten the entire croissant I had just a few minutes been so disturbed by. “Then he called me to do the — you know the live-read that they do?” She was referring to the live reading series of classic films that Reitman puts on at the Los Angeles County Museum of Art.

“Yeah, so I did Goodfellas. I did the Lorraine Bracco part. Again, he could’ve stunt-casted with anybody, and while there he said, ‘Did Hulu call you?’ And I said, ‘No. Are they going to?’ and he said, ‘Yeah, they may.’ I said, ‘Why?’ which I don’t know who that girl was, because I should’ve been like, ‘OK, thank you, sir.’ He goes, ‘You know, have you come in and work on stuff,’ and I was like, ‘Oh, great, I’ll give him some more reasons not to hire me.'”

I prod further, inquiring about a moment when her mother opened up to her. She paused, put her finger to her mouth, and inhaled. “She said, ‘I’m so proud of you.’ And I said, ‘Thanks, mom.'” She stops, getting a bit choked up. “She said, ‘I mean, for just going for it. I don’t know if I would’ve had the courage to go after something everyone knows the chances of succeeding in any way [aren’t great]. It takes a lot of courage.’”