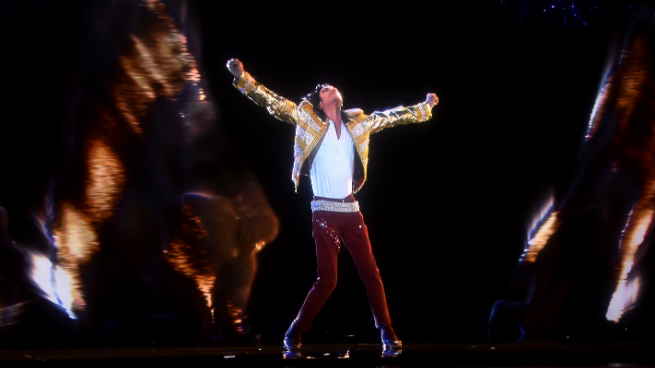 Last night, in the middle of a man-made desert oasis characterized by its gargantuan Greek forums, scaled-down replicas of metropolises and a light-beam-emitting pyramid, hundreds of hours of engineering and creative manpower came together in an effort to make us feel like a dead person hadn’t died. For four minutes, the #MJHologram, or “The Michael Jackson Experience,” as it was vaguely referred to prior to its unveiling at last night’s Billboard Music Awards, danced, moonwalked, and “OW’d” before a crowd of 16,000. What better place to showcase our latest feat of digital mummification than Las Vegas, whose notorious mantra — “What happens here stays here” — is a kind of preservation spell of its own?

The happening had been semi-spoiled two days earlier when the company responsible for Coachella 2012’s Hologram Tupac filed a last-minute lawsuit for patent infringement. From where I was sitting, I could see why they probably didn’t have a case: Hologram MJ was a decidedly more 2-D creation than his predecessor; imprisoned behind what looked to be a rear-projection scrim while his background (or foreground, rather) dancers were free to move to the edge of the stage and down the aisles. A draft must have been moving across the MGM Grand arena, creating a bizarre ripple effect across the scrim as if we were watching a dream sequence on an old-timey soap opera. Or as if we were all leaning over a reflecting pool, Narcissus-like, and instead of a mirror image of ourselves we saw a sub–Polar Express facial rendering of a supremely talented performer and alleged sex offender.

People so badly want Michael Jackson to be alive! And yet they also don’t, judging by the reactions both on Twitter and on the faces of the attendees at the MGM Grand. Besides Xscape, the Timbaland-produced posthumous album released last week to optimistic nods and slightly nervous squirms, there’s the Cirque-produced Michael Jackson ONE at Mandalay Bay, which uses projected film clips and body-double dancers to re-create the experience of the greatest MJ concert ever, five nights a week. Perhaps we’ve been dancing with Michael on the invisible border of the uncanny valley for so long that we didn’t notice we’d crossed over until it was too late. My favorite part of the Billboard Awards’ MJ experience was the moonwalk, not for the spectacle of seeing a CGI projection of Michael Jackson do the moonwalk, but because of the confused, scattered applause in the auditorium. Is this — ? Do we — ? The camera kept cutting to people genuinely grappling with some serious conceptual-art questions.

Ask anyone you know who watched the show or saw clips of it this morning, and they’ll most likely tell you it made them feel weird inside. Which raises the question: Who are the people who sign off on these posthumous mirages, and why doesn’t it make them feel weird? It’s a science fiction trope that when we momentarily lose touch with our humanity we tend to make bad decisions with technology. Hologram MJ isn’t the beginning of the end-time by a long shot; but it’s symptomatic of some deeper dysfunction; a dancing Godzilla you can pass your hand through harmlessly. Perhaps hundreds of thousands of years from now, when aliens comb through the rubble of our fallen civilization, they’ll find the hard drive that houses the 1s and 0s that preserved the memory of a beloved king, right next door to the crumbling columns of Caesar’s Palace. And they’ll be like, “That’s GOT to be Justin Bieber on the mocap.”

Pros and Cons: Alfonso Cuarón Directing the 'Harry Potter' Spinoff 'Fantastic Beasts and Where to Find Them'