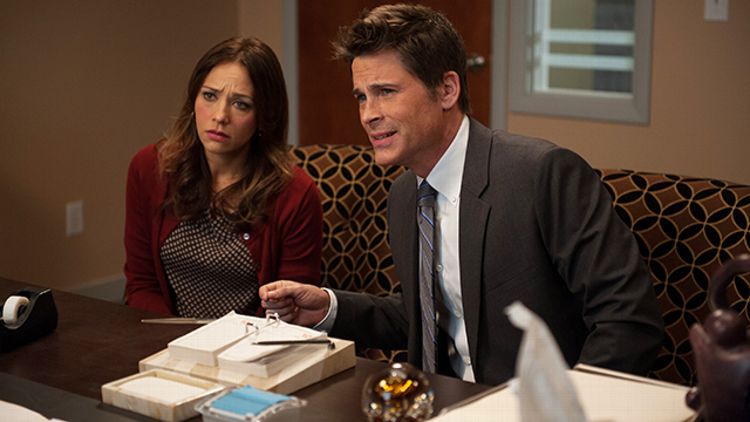 Two of Pawnee’s most upstanding citizens, city manager Chris Traeger and nurse Ann Perkins, are heading out of town. In other words, as BuzzFeed reports: Rob Lowe and Rashida Jones are bouncing out on Parks and Recreation, and will be doing so after the 13th episode of this upcoming sixth season.

Lowe might not be going far: As Deadline reports, “NBC is looking to keep Lowe in the fold, finalizing a development deal with an actor for a potential new series.” And Jones will be keeping busy, too: “Jones has been ramping up her producing career, setting her production company with Will McCormack at Warner Bros. TV.” (She and McCormack wrote Celeste and Jesse Forever.) But, for now, we begin to say good-bye to two bedrocks of Pawnee — Lowe popped up in Season 2 and happily stuck around; Jones was the second person on board after Amy Poehler, when the show was still thought to be an Office spinoff.

In a statement, executive producer (and friend of Grantland) Mike Schur started the process:

The news about Rob and Rashida is true — they will be leaving the show after the 13th episode of the upcoming season six. We’ve been working on their storyline (on and off) for four seasons now, and heading into this year, with the two of them contemplating parenthood, it felt like a natural time to move them into the next phase.

We absolutely love both Rashida and Rob, and will be sad to see them go. Rashida was one of the very first people we knew we wanted in the cast, and as important as Ann is to Leslie (and vice-versa), she’ll certainly never be far from Pawnee. Rob we initially thought we could only have for six or eight episodes, and we couldn’t be happier that he will have stuck around for 75.

They are wonderful, funny, committed actors, they’ve been a huge part of the Parks and Rec family, and we think we have a great Pawnee send-off in the works for them.

2 Guns for Hire: Washington and Wahlberg's Paycheck Roles of a Lifetime