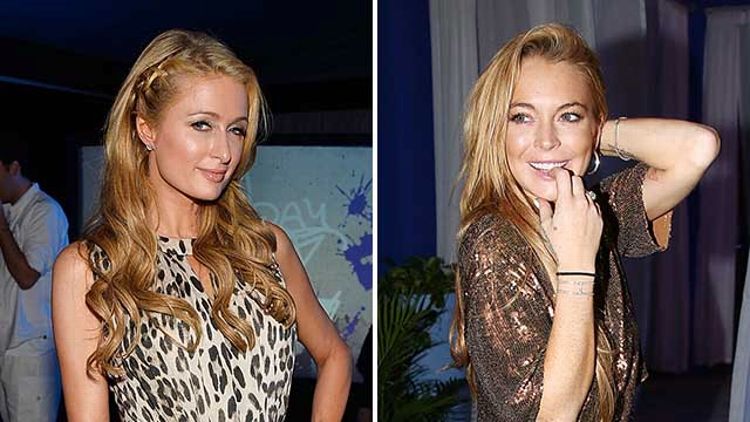 You know the poster for Grudge Match with Robert De Niro and Sylvester Stallone that’s plastered all over the place right now? It shows the two grizzled screen veterans locked in an eternal punch, the fantasy matchup between Rocky Balboa and Raging Bull that everyone’s been clamoring for all this time? Now, using your mind, Photoshop Lindsay Lohan’s and Paris Hilton’s faces over De Niro’s and Sly’s. The latest chapter of another blood feud old as time (2005) involves Paris, Lindsay, and Paris’s little brother Barron Hilton in a classic case of he emoji’d, she emoji’d.

Lindsay and Paris were both at Art Basel in Miami, following the party trail of rich kids, artists, and rich kids who fancy themselves artists. Naturally they were at the same house party in a rented Florida mansion, when Barron Hilton was accused by a partygoer of continuing the proud Hilton family tradition of talking shit about Lindsay Lohan. Shortly thereafter, Hilton found himself on the receiving end of a moderate beatdown that left him with cuts on his face, which he uploaded to Instagram so that it could be decided in the selfie court of public opinion.

According to Barron Hilton, Lindsay was behind the attack. He says Lohan didn’t get her knuckles bloody, she just dispatched one of her goons. Barron claims Lindsay approached him and said, “You talk shit about me to my boyfriend, this is what you get,” and then laughed maniacally while she watched Barron’s face get pulped. Lohan, of course, says she had nothing to do with the incident, and her team suggests Barron might have been overly paranoid from drug use. While Michael Lohan backed up Lindsay’s claim that she had left the mansion before the fight occurred, there’s video of Barron and Lindsay at the house right after the incident.

Ray Lemoine, the guy who had rented the house, came forward to cop to throwing the punch at Barron. Lemoine says the fight had nothing to do with Lohan, and that he was just laying out some street justice when Barron wouldn’t leave the party. He says Hilton was giving him some lip along the lines of “Do you know who I am?,” which is especially sad because the only correct answer is “Paris Hilton’s even more useless little brother.” Hilton believes Ray is the one who hit him, but maintains that Lemoine was still defending Lohan’s inflamed sense of honor. One crazy fan theory believes that Lohan and Hilton were once lovers, and that their protracted feud is actually a quarrel between exes.

All of this sounds like a bad time, like the minute when a party turns from unbridled late-night hedonism to early-dawn desperation. Paris commented with two different angry emojis on Barron Hilton’s picture of his fucked-up face. She also tweeted that “karma’s a bitch,” subtweeting Lohan and suggesting that if Lindsay fancies herself a mini mob boss, she might want to check herself before Paris has to wreck her shit again. And it’s not a good look for a very public recovering addict to be at late-night house parties where she is no doubt surrounded by drink and drugs. But I think I’d still go with Lohan’s shady Long Island–honed skills over Paris’s mean-girl boarding school circuit training. Don’t mess with the Lohan.

SNL: Paul Rudd Battles for the Spotlight in a Cameo-Filled, One Direction–Hosted Episode