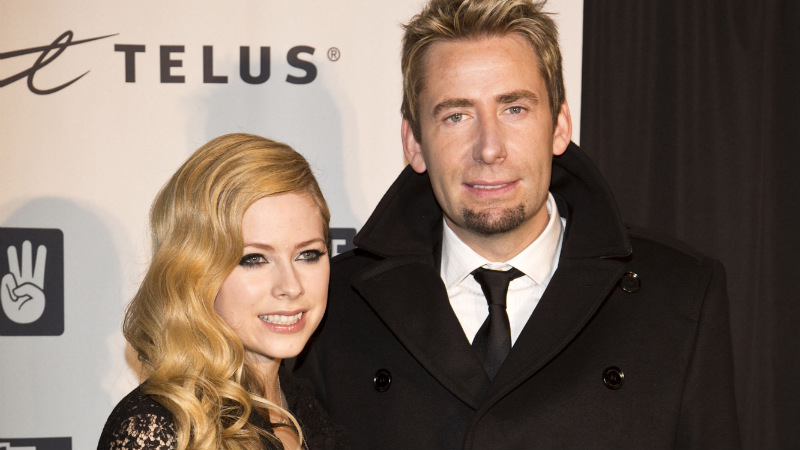 Divorcing Celebrities You Forgot to Care About of the Week: Avril Lavigne and Chad Kroeger

When is the last time you thought about Avril Lavigne? She released an album last year with a minor hit, “Here’s to Never Growing Up,” but don’t feel bad if you’ve never heard it. The song does not come close to the soaring heights of, say, “Keep Holding On” or “Sk8er Boi.” In the years since her peak relevancy, she has been married to Deryck Whibley of Sum 41 fame, then divorced, then married to Nickelback’s Chad Kroeger. Lavigne just can’t stay married, though. Us Weekly reports that Kroeger is “going around L.A. telling people that they are divorcing.” I wonder if there is some sort of speaking engagement circuit for former pop stars to make such announcements, and, if so, is one paid in dollars or Us Weekly word counts? Apparently a gigantic diamond (as seen here) is not enough to save a marriage. Their troubles reportedly stem from the fact that her more recent album, on which he was a producer, did not do well. She is probably playing “My Happy Ending” and “Complicated” on an endless loop right now, revisiting her glory days and contemplating how she’ll ever move on.

Playboy George Clooney has been softened by love. Nora Ephron could not have scripted it better — including that exclamation of “Oh my god!”

As you heard him say, Cloondog and Amal Alamuddin will be getting married in Venice “in a few weeks.” The Daily Mail (via Us Weekly) reports that there’ll be just 60 guests, and Matt Damon and Mr. Cindy Crawford (a.k.a. Rande Gerber, tequila magnate and business partner of Clooney) made the cut. Andrea Bocelli is expected to perform. They’re having a brunch wedding, with an 11 a.m. start time. While this is unconventional, I commend it. I’ve been to a brunch wedding and it’s actually fantastic. You can go breakfast or lunch with the food, it’s casual but spirited, and the drink starts early. Who has a problem with that? George and Amal have chosen Aman Canal Grande Venice hotel for the nuptials, where rooms cost £1,000 to £3,200 a night. It will probably be perfect (and extremely expensive).

This is a weird one: Lindsay Lohan claims that during her 2012 court-ordered community service, which included 12-hour shifts working in a morgue, she may have handled Whitney Houston’s body bag. She told the Telegraph, “It’s different for me than it would be for other people — like, no one would really have to work at the morgue in L.A. and roll a body bag for Whitney Houston.” I’d like to say that Lohan is unfamiliar with the Internet and the concept of viral content, thus explaining why she made such a ludicrous statement to a newspaper on the other side of the world from Los Angeles. But I know this is not true. After all, her failure to properly record her own ice bucket challenge in August makes it pretty clear she knows how to get hits. Of course, the Los Angeles Coroner did read Lohan’s interview and has since refuted the story. Says TMZ, “Whitney was NEVER in a body bag and no one in the probation program came in contact with Whitney’s body.” Your move, LiLo?

The Week in Beyoncé and Jay Z

The hits keep on coming from these two. They filled the gossip pages with one non-story and one thoroughly modern controversy. The week began with whispers about a possible Beyoncé pregnancy. Jay Z changed lyrics in “Beach Is Better” at their show in Paris to say “’cause she pregnant with another one.” Sure, that could be some very poorly coded language announcing that his business partner wife was with child. Or, maybe they just feared that performing in Europe was hurting the number of stories written about them so he decided to stoke the flames — much like the time Beyoncé capitalized on the divorce rumors and changed her lyrics to something about Jay Z cheating on her for the duration of their relationship and thus extended the conversation for a couple more days. They set a precedent by announcing Beyoncé’s alleged pregnancy on the VMAs in 2011, so we’re all expecting the next truth bomb to drop onstage, too. We’ve come to mistake their constant performance art as something more authentic, but they remain performative even when supposedly ending rumors. They squashed the pregnancy talk by posting a photo of Bey sipping on champagne.

Days later, though, their careful narrative curation faltered, even if for a moment. Beyoncé posted a photo of herself in a bikini on a yacht. She is being accused of Photoshopping the image to accentuate her thigh gap. This BuzzFeed post points out the uneven part of the stairs behind her where the alleged enhancing occurred. That kind of mishap seems like a fireable offense given how important Beyoncé’s propaganda photo collection is to the telling of her story.

Ryan Gosling and Eva Mendes are forever connected by way of their new infant daughter. The little girl was born on Friday, September 12. Few details have surfaced, which follows the duo’s reticence on the topic. Gosling’s mother and sister were photographed outside his house, presumably there to meet the baby. I wonder what sort of accent this child will have. There’s no way of knowing how many verbal tics and twangs Ryan Gosling will adopt over the next few years.

Big Sean is officially part of our cultural fabric — at least for the moment. Musically, he came up under the tutelage of Kanye and G.O.O.D Music, and now he’s signed to Jay Z’s Roc Nation for management. But his rap career is really secondary here. He’s had a big 2014 in terms of gossip. He began the year engaged to Glee’s Naya Rivera. They broke up in the spring, because he allegedly cheated on her with Glee costar Lea Michele. According to Blind Gossip, Rivera found sexts on Sean’s phone, which led to the end of the engagement and her gig on Glee. Apparently, her role was reduced after a blowup with Michele. That’s a lot of collateral damage caused by one dude! He has since moved on to dating Ariana Grande, and you can hear him whispering on “Problem” and a few other tracks with pop music’s newest diva. Yet, he’s not completely free of the Rivera situation. This week he debuted a new tune called “I Don’t F​-​-​- With You,” and it seems to be all about his ex-fiancée. In it he raps, “I just dodged a bullet from a crazy bitch.” Yikes.