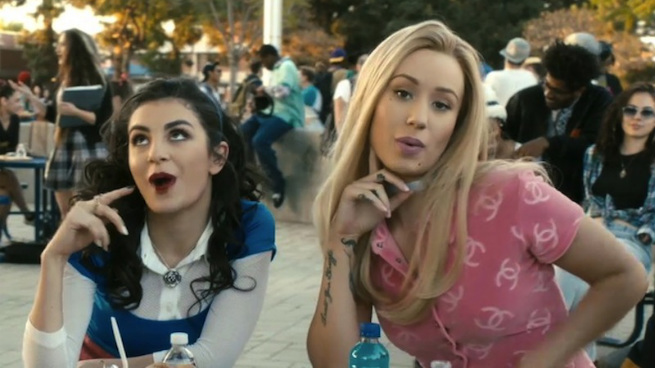 Can a song climb the charts too quickly? After several years of hovering just below the radar, Australian rapper Iggy Azalea is all of a sudden courting overexposure, having performed her U.S. breakout “Fancy” on ABC alone three times in one week (Jimmy Kimmel Live, the Billboard Music Awards, the Dancing With the Stars season finale). Between this song and Ariana Grande’s “Problem,” on which she features, she’s on track to dominate the majority of the summer. It is likely your parents know who she is.

When “Fancy” first dropped in February, it felt like something we could probably hear once a day through the end of August and never tire of, a “Hollaback Girl” redux by another platinum blonde with a propensity for talking about “her shit.” Part — I would say most — of that infectiousness is due to Charli XCX’s Stefani-like hook. This is Charli’s second top-10 hit as a featured performer, the first being Icona Pop’s “I Love It.” She makes a far more lasting impression in this song (and in the Tumblr-ready Clueless-themed video, paying homage to the late Brittany Murphy’s Tai Frasier), but it wouldn’t kill Iggy to shout her out in the outro or something, would it? It could have helped with what seems to be an overall branding problem for Charli. It is curious, though, how Iggy and Charli, our sassy male-monikered diva heroines, seem so distant in whatever loose narrative this song builds. When Charli sings about trashing the hotel, one just kind of infers that Iggy isn’t hanging out with her, perhaps because both of them are mostly talking in first-person singular. It’s “I’m so fancy,” not “We’re so fancy.”

The word “fancy” itself is key, too, put to similar use as Swizz Beats did in Drake’s 2010 track of the same name. Though Drake’s and (Azalea mentor) T.I.’s verses generally praise the titular fanciness of the woman in question, Swizz’s hook always seemed like a bit of a lyrical side eye. “You fancy, huh,” became something of a catchphrase of its own, usually used when someone is dressing or appointing themselves beyond their station, so Charli can’t help but sound a little self-deprecating declaring herself “fancy” in 2014. The joke in using the word “fancy” is apparently that actual fancy people would never use it. When was the last time you used it unironically in a conversation that wasn’t about Heinz ketchup?

Iggy’s voice is divisive, but if you were still on the fence, “Fancy’s” insanely heavy rotation should be enough to tip you toward one camp or the other in the next few months. For me, it took about five plays to get sick of the song. I’m not alone in being utterly unconvinced by Azalea, both her put-on “hood” accent and her lack of a distinct point of view, but I suppose I remain open to being proven wrong. Why is she here? What does she have to contribute? It’s early yet, and it’s fair enough that it’s still unclear, but “Fancy” doesn’t get us any closer to an answer. (Her 2013 single “Work” gives us a little more insight than her more mainstream-courting material — a little.) Watching her explain her lyrics in Jimmy Kimmel’s “New Lyrics for Old People” segment (a.k.a. Rap Genius) made that abundantly clear, though, to be fair, not very many people could come out of that bit with their cool fully intact. Iggy giggled and looked uncomfortable, unintentionally giving the impression that she thought the song was as much of a joke as Kimmel did, in turn fueling any extant suspicions that she’s just a little girl playing dress-up.

None of this matters for the moment — she’s a successful pop star now, after all, and other singers and rappers have gone further with less. With “Fancy” and “Problem” at no. 2 and 3 on the Hot 100, respectively, pretty soon people are going to start asking whether she “deserves” all this more loudly, a ridiculous question built on a lot of flimsy assumptions, but one she could still fail to answer in the right way. Sure, that’s a problem, but it’s a pretty fancy problem.