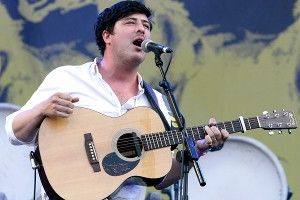 So, first things first: Mumford & Sons’ new album Babel sold 600,000 copies in its first week, making it the biggest debut in the U.S. this year. That significantly quashes the closest competition: Justin Bieber’s Believe, which managed 374,000, Madonna’s MDNA, which copped 359,000, and P!nk’s The Truth About Love, now knocked off the medal stand altogether at 280,000. It’s also the biggest rock album debut since AC/DC’s Black Ice did 784,000 in November of 2008, and the biggest independently distributed release since The Eagles’ Long Road Out of Eden, a Walmart exclusive, did 711,000 in November of 2007. And Mumford did all that, as far as I know, without anything like the Amazon 99 cent deal that boosted Lady Gaga’s Born This Way to over a million copies sold back in 2011. OK, enough dry statistics? You are convinced? This is, in current shrunken-music-industry terms, lots of albums sold?

What makes the sales numbers particularly notable at this time is this week’s New York Magazine cover story: Grizzly Bear Members Are Indie-Rock Royalty, But What Does That Buy Them in 2012? The piece profiles the band as they go about releasing their latest critically acclaimed album, Shields, and does a bit of charting of their personal finances:

“People probably have an inflated idea of what we make,” says [front man Ed] Droste. “Bands appear so much bigger than they really are now, because no one’s buying records. But they’ll go to giant shows.” Grizzly Bear tours for the bulk of its income, like most bands; licensing a song might provide each member with “a nice little ‘Yay, I don’t have to pay rent for two months.'” They don’t all have health insurance. Droste’s covered via his husband, Chad, an interior designer; they live in the same 450-square-foot Williamsburg apartment he occupied before Yellow House … After covering expenses like recording, publicity, and all the other machinery of a successful act … Grizzly Bear’s members bring home … well, they’d rather not get into it. “I just think it’s inappropriate,” says Droste. “Obviously we’re surviving. Some of us have health insurance, some of us don’t, we basically all live in the same places, no one’s renting private jets. Come to your own conclusions.”

The piece has sparked a debate online: If a band like Grizzly Bear can’t live comfortably, who can? The band takes pains to point out that it’s in no way bitter about its lot. They love making music, and they’d do it for no money too. It’s more like, they could see how a few breaks here and there — most importantly, in Droste’s opinion, getting on the radio — could bump them up into a comfortable middle-class lifestyle.

Later in the piece, Droste says:

“We’re all aware that there’s a history,” he says, “and our position in it could be very fleeting.” And: “We live in a world of blogs that are super-judgmental, and we’re not in the clear yet — we don’t have a ‘Get Out of Jail Free’ card. Once you reach a certain level of sales, and you actually hit radio, then I think it doesn’t matter. We’re not there. Mumford & Sons are in the clear — who cares what their reviews are? If you’re already selling a shit ton of records, selling out giant venues, it doesn’t matter.”

And now, here Mumford & Sons go again, selling a “shit ton of records,” thanks in part to big radio support. Is it worth asking if maybe Mumford & Sons clientele skews younger or older than Grizzly Bear’s, into the kind of demographics that still buy albums? Is it fair to assume that Droste has no interest in sounding like Mumford & Sons, whose music has some old-timey bells and whistles but ultimately feels ready-made for pop radio? Should someone in Grizzly Bear have married Carey Mulligan?

There are two sides to the response to the New York piece: people aghast that a top indie band can’t live comfortably, and people accepting of the idea that working in music is a passion, and therefore is not required to provide you with a comfortable living. But it’s now clear that new bands do have one clear path towards financial solubility: Become as Mumford & Sons-y as possible.

Deck the Halls With Grease Reunions. Or Maybe You'd Like Sufjan Stevens?