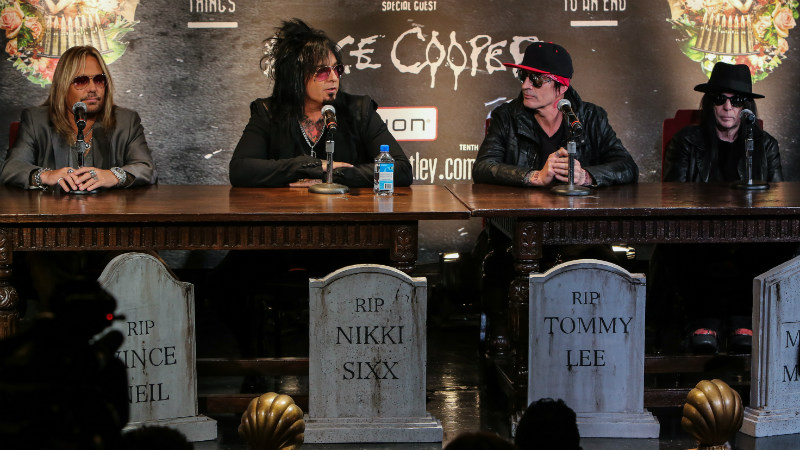 “We wanted to leave a legacy,” says Nikki Sixx. “We feel there are a lot of bands that don’t have dignity. We want to call it a day and be proud.” And so it was. The Crüe will so elegantly resign their Crüehood that they’ll have a piece of paper — variously described as a “legally binding agreement,” a “contract,” a “legal document,” and a “cessation of touring agreement” — keeping anyone from performing under the moniker after 2015. “We don’t want to be one of those bands where one guy is left,” Vince Neil says. “We wanted to go out with the four founding members and go out on top.” That’ll mean one final tour, a 72-date marathon opening in July in Grand Rapids and concluding in November in Vancouver, with Alice Cooper serving as the opener.

“Other bands have split up over rancor or the inability of people to get along, but this is mutual among all four original members and a peaceful decision to move on to other endeavors and to confirm it with a binding agreement,” says Crüe attorney Doug Mark, elsewhere quoted as saying, “We’ve all seen too many diluted trademarks.” Mick Mars likens the dissolution to the Beatles [Editor’s note: Perfectly reasonable.], with the bandmates owning the name along with the master recordings.

Thirty-one years after Shout at the Devil put Crüe on the map and into Chuck Klosterman’s heart, there’s also a country music tribute album featuring LeAnn Rimes on the way, plus a film based on 2001’s tell-all tome, The Dirt, which Jackass helmer Jeff Tremaine will direct. As to exactly what kinds of pyrotechnics and spinning drum kits fans can expect from the concerts, good luck figuring it out beforehand. “When it comes to putting together a new show we always push the envelope and that’s part of Mötley Crüe’s legacy,” Sixx says. “As far as letting on to what we’re doing, that would be like finding out what you’re getting for Christmas before you open the presents. We think in an age of too much information, we’d like to keep some surprises close to our chest until we launch the Final Tour.” Capital F, capital T. Don’t forget it.