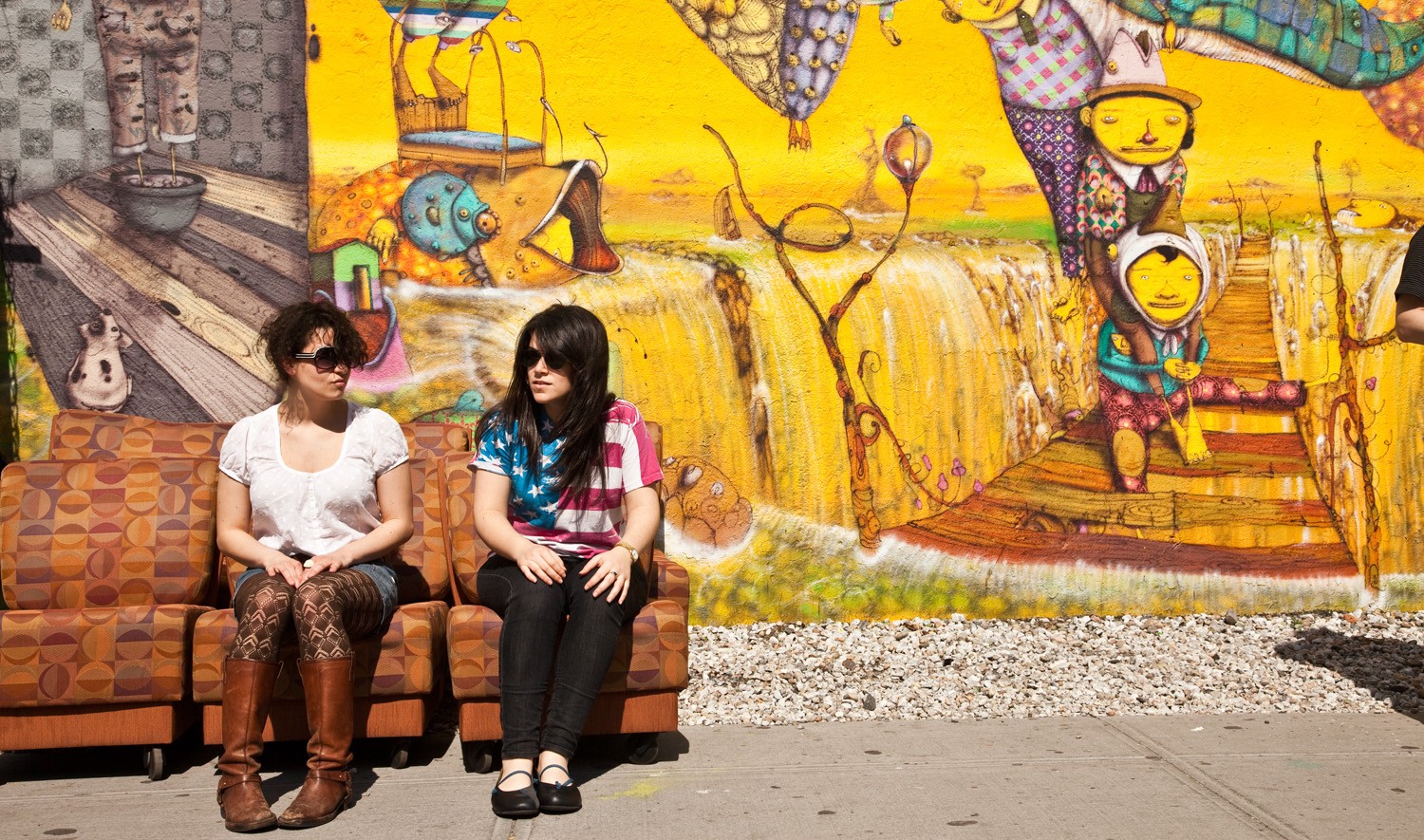 That Abbi Jacobson and Ilana Glazer — the winsome creators, writers, and stars of Comedy Central’s Broad City — have their own subway ad feels surreal enough. That they’re not yet too famous, rich, or coddled to take the subway adds an extra layer of odd. “I won’t stand near it,” Jacobson explains, over breakfast at a distinctly composting-friendly SoHo cafe. “But it’s like an old-person friend, where I check in on it. I look [down the platform] like, ‘You doing OK? Great. I’m cool too.’” Glazer adds, “They wink just at Abbi.”

The two first met taking classes at the Upright Citizens Brigade Theatre and then spent the next few years on the archetypical fledgling/flailing NYC comedian grind: soul-crushing day jobs during the day, comedy and booze with friends at night. The de rigueur path forward was a spot on one of UCB’s house improv teams. “We were auditioning,” Jacobson says. “But I mean, I couldn’t even get a commercial agent. We were like, ‘The only way to do it is to make our own stuff.’” She adds, laughing: “‘Or we’re never … gonna get … on anything.’”

That’s when Broad City — in its original form, as a low-stakes web series starring the two as heightened versions of themselves, charmingly stumbling through New York — was born. Glazer explains: “We found, consistently, that our dynamic” — roughly: Abbi as the sensible milquetoast, Ilana as the destructive libertine — “made us laugh. We were like, ‘Where is this coming from?’ It was very Broad City, before we even knew it.” And here, to prove her point, Glazer rears back, then launches herself an inch from my temple, drill instructor style: “And I really do like to gross Abbi out right in her ear.”

In the first installment of the web series, Abbi and Ilana quibbled over proper panhandler-gifting etiquette; by the last, they were whizzing through Manhattan, bashing past charity-clipboard militants, stealing basketballs and iced coffees and hearts. (Still: It was all in the name of making it to the movies on time.) The improvement was marked, and impressive, and came from a conscious decision, to, in so many words, step up their fucking game. “Taking yourself seriously is a bold choice,” Glazer says. “But we started thinking about it as a mini TV show. Like, ‘OK, what roles need to be filled? PR, producer …’”

Jacobson: “HR.”
Glazer: “We had HR. I was always having sexual harassment issues …”
Jacobson: “… and I had to deal with them. It’d be like, ‘Ilana, someone’s brought it to my attention that you’ve been sexually harassing them.” Pause. “It’s me, and it needs to stop.”

Egged on by their buddies and collaborators, they expanded the vision: more money, more time, more ambition. “Our friend T.J. Misny directed the finale,” Glazer says. “He’s so fucking talented, and he made us up the ante.” “He’d bought this [HD] camera, that we use on the show now,” Jacobson says. “He was like, ‘If we do this, we gotta do this [right].’ And we rose to meet him. As Oprah would say.”

Plotting to land a big cameo for the finale, they targeted Amy Poehler, a cofounder of UCB — who just so happened, as Abbi’s online stalking revealed, to be in town for the Time 100 gala. They asked an old UCB teacher to email Poehler; to their great shock, Poehler emailed back that she loved Broad City and that she’d love to do it. Glazer was then still working full time (at the place parodied on Broad City as the ineffectual Deals Deals Deals). “I had to tell my boss, ‘Amy Poehler is doing my web series? So I’m gonna take Thursday off?’” In the final cut, Poehler is crushed by a piddling pile of oranges.

At the time, Jacobson and Glazer were already working on a Broad City TV pilot; the plan was to wrap up the series, then head to L.A. to pitch it. But the finale was so well received that they were inspired to hit Poehler up with an audacious request: Would you want to, ah, executive produce our project? “Just being like, ‘We might as well fucking ask,’” Glazer recalls. “I don’t know what the fuck we thought she’d say.” And she said — yes! “So it went really well with Amy. We were all the same height, which helped.”

While writing the pilot, they’d ransack Barnes & Nobles for TV Writing for Dummies–type books and work patchwork gigs. Jacobson handed out flyers at Equinox in exchange for a membership. “I was all about, ‘I get to work out and there’s Kiehl’s products and I get to be here …” Abbi reminisces. “She was pretty much the [sandwich] board person,” Ilana says. Meanwhile, Glazer part-timed in transcription: “It’d be DVDs of like ‘I love the fucking early-2000s steampunk!’ or some shit.”

Glazer: “At times I did feel like I was sitting in a corner.” [Cue anguished weeping.] “‘IS THE SHOW GONNA HAPPEN?!!’ We’d try to keep other from going insane. ‘We’re doing something, right? We are … doing … something?’”
Jacobson: “‘We got a call next week! We’re talking to people!’”
Glazer: “I had to call my dad and be like, ‘Can you tell me I must invest in myself for this?’ He was like, ‘What do you want me to say? Cause it sounds like you’ve already …’ It was so scary.”

In mid-2011 they headed to L.A., where they went to meetings, crashed on couches, and quickly blew through their savings, mostly on rental cars. And within just a couple of months, baruch hashem, they got the call: FX was in, with a script commitment. “We had like an out-of-a-movie moment,” Jacobson says. “The two of us, on the phone, outside of a breakfast place in L.A., screaming to our parents.” Glazer: “Always to our parents …” “There was also a FedEx guy,” Jacobson retorts. “I hear Ilana down the street, yelling to him, ‘We sold the show!’ It was so surreal. It’s still so surreal. We’re talking about our TV show? What?”

There would be more dramatics. FX ended up passing on the pilot, which was devastating. Hearing the news, Ilana “just laid on the floor.” Abbi “went for an angry run. On the West Side Highway. Like, ‘What is my life?’” They lay low, but pitched the show again just a month later. And Comedy Central snapped it up. “FX was great, but it felt like a long-distance relationship,” Jacobson says. “And then we got dumped by our long-distance boyfriend. And then we entered a loving, caring relationship.”

Glazer elaborates: “At the time [with FX] we were like, ‘This makes sense, right?!! This makes sense? This makes sense?’ But the tone clicked in once we went to Comedy Central.” There were practical changes: For one, inspired by her Equinox gig, Abbi’s character went from coffee-shop employee to the SoulCycle-knockoff untouchable she is today. Mostly, though, Glazer says, “picturing it at Comedy Central made certain objectives about the show clearer. It was like DUH! FUCKING DUHHH!”

Glazer: “There’s a lot of communication and interpersonal stuff [in showrunning]. But I love it. Personality challenges! That’s my jam. You don’t wanna hurt anybody’s feelings. You wanna communicate it effectively the first time. And it’s interesting how many shades of gray there are. There’s like …”
Jacobson: “Fifty.”
Glazer: “Fifty! Yes, dude!”
Jacobson: “I think there’s like fifty … two. That was a bullshit book. There’s 52.”
Glazer: “They don’t even know. That movie is gonna be shit.”

The two have to go. They’re due over at Washington Square Park, where the Broad City promo truck is parked, to hand out branded tchotchkes (condoms, rolls of quarters, and, OK, maybe an Xbox or two) to a potential viewing audience. But they linger for a bit, each requesting one more half cup of coffee, and talk about work: the sad production studio, located in what they call the “Bead District,” where they do their editing; the Just Blaze instrumental they probably won’t be able to afford to use on the show; the closing credit font (they’re thinking Gotham?). Then a certain scene in an upcoming episode comes up, and they can’t contain their glee.

“Abbi’s laying down like this,” Glazer explains, doing a full-extension woman-at-prow-of-ship type move. “And someone takes a shot,” Jacobson continues, “basically out of my ass. That’s a scene where I forget I’m in it. I’m like, ‘What is this bitch doing?’” Glazer excitably approves: “Yeah! And when it feels like it’s not us, its like, ‘Oh my god, this a fucking TV show.’ And the episodes get better and better. I can’t.” Pause. “Even.” Pause. “Fucking.” Pause. “Wait for the world to see these episodes!”

Steve Coogan and Rob Brydon Bust Out Their Dueling Michael Caine Impressions Again. And Throw in Some Bale and Bane.