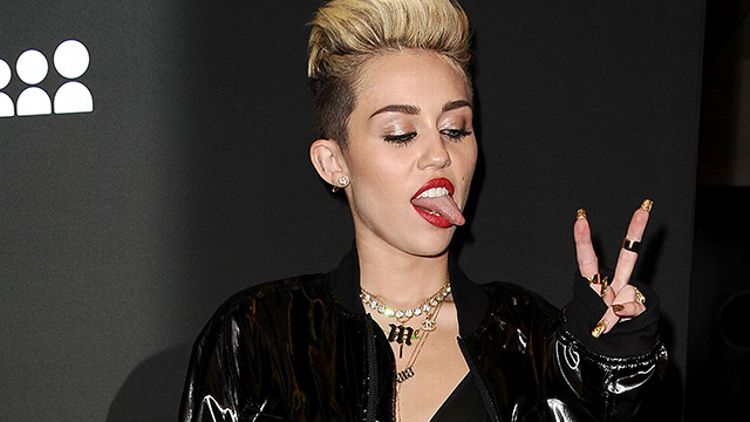 Are we supposed to be worried about Miley Cyrus? I was so utterly charmed by her Jimmy Kimmel appearance this week that I kind of forgot that there’s a whole segment of celebrity-following Americans who think she’s having some sort of crisis because she publically admits to smoking pot and refers to “dancing with molly” (Uh, I mean, herself) in her new super-viral single “We Can’t Stop.” The song was originally written for Rihanna, but even with the exact same lyrics and production it would have come off as much more weepy and nihilistic, because Rihanna can’t help but sound like she’s frowning every time she sings. Miley makes it sound like a campfire song. RiRi probably wouldn’t have opted for such a gleefully silly music video, either. Abstractly speaking, Rihanna doesn’t laugh. Miley can’t stop laughing, it seems, and even if that’s just Snoop’s OG Kush talking, it makes it hard to be mortally concerned for her.

Certain stars attract concern, and it rolls off others like mustard off NeverWet. A lot of that has to do with how much talking you do. Being on the brink of crisis can be a personal brand, both intentionally (Rihanna, Drake) and unintentionally (Justin Bieber, Britney Spears circa 2007). In the last couple years, before this current music-focused publicity cycle, Miley had been engaging in all sorts of eyebrow-raising, salvia-smoking, dick-cake-eating shenanigans that for all appearances were completely unsanctioned by any handlers or publicists. Those stories had longevity because she wasn’t creating any other news for herself; tabloid writers and content farmers with daily hit goals to reach had no other option but to focus on, and effectively overstate, Miley’s wild behavior. Underneath that narrative was the question of whether or not she was still “working for us” (i.e., planning on producing any new music, ever), and if not, why we were even still paying attention to her.

That’s what happens when you let people outside your camp take the wheel on your personal narrative — generally, they can’t really think too far outside eye-grabbing terms like “meltdown” and ” gone too far,” even when the person in question is a 19-year-old girl who doesn’t even have a fully formed adult version of herself yet to send up in flames. More often than not, gossip outlets aren’t selling the story of the celebrity, they’re selling the story of the potential reader projected onto a celebrity, whether it’s the recently dumped teen (“Miley Cyrus Shopping Through Heartache!”) or her anxious mother (“Is Miley Cyrus Out Of Control and Worrying Her Loved Ones?”). But now that Miley is the one doing the talking — and boy, is she talking! — there’s a sense of relief in how normal she sounds. Her packaging is edgier, sure, but she seems to have a good grip on her sense of self, at least compared to the zonked-out picture being sold by the tabloids in the past few years. You can argue over who’s more trustworthy, the celebrity and their handlers or the grocery aisle magazine racks, but I think there’s more solid information in the story the celebrity’s trying to sell, because whether or not it’s bullshit, it’s inevitably a variation on, or overcompensation for, their actual state of mind.

I see Miley as a kind of reverse Justin Bieber. Her new cool attitude allows more room for youthful fuckups; it’s all about giving up the kind of obsessive control still surrounding stars like Taylor Swift and Selena Gomez. She doesn’t have it all figured out, but she’s clearly not claiming to. Meanwhile, Scooter Braun is still trying to sell the image of Justin Bieber the teenage dreamboat, while it has become clear that, personally, he’s having more of a Bubbles moment. That disconnect, not only between a star and his audience but between the star and himself, is what opens someone up for mockery and gets them booed at the Billboard Awards. And while Miley twerking away as her parents’ marriage dissolves is ripe for armchair psychology, you can’t argue that it’s not a pretty typical kind of duality for a young woman her age, and that there’s not a blitheness to how she’s been able to maintain her public persona throughout it all. Growing up is tough, most of us turn out OK, blah, blah, blah. I don’t know about you, but I think we’ve all been 20, too.