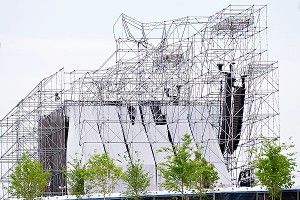 A Toronto stage that was to host a Radiohead show collapsed on Saturday, killing one man and injuring three others. Yesterday, the Toronto Star reported that the man killed was Scott Johnson, 33, the drum tech for the band. In a statement, Radiohead’s drummer Philip Selway commented: “We have all been shattered by the loss of Scott Johnson, our friend and colleague. He was a lovely man, always positive, supportive and funny; a highly skilled and valued member of our great road crew. We will miss him very much. Our thoughts and love are with Scott’s family and all those close to him.”

The tragedy recalls last year’s stage collapse during Sugarland’s show at the Indiana State Fair, in which seven people were killed, as well as the stage collapses at Ottawa’s Bluesfest in Ottawa in July and at Belgium’s Pukkelpop Festival in August. The Star reports that the incident in Toronto was not caused by hazardous weather: “Industry professionals are questioning the circumstances leading up to the fatal accident, which occurred on an otherwise bright and sunny day, with only light winds.” Speculating as to what other factors could have played a part, the Star explains that “stage and scaffolding builders hire and work in concert with a structural engineer, who assesses how much weight the roof can hold. The so-called “load factor” is then presented to the promoter … On the day of the show, plans can sometimes go awry, with builders, the engineer and the promoter sometimes disputing just how much weight a roof can hold … Indeed, a quick, high-pressure turnaround between the moment a band’s technical crew arrives at the venue and show time often leaves little room for structural modifications, if need be, as promoters rush to prepare the stage.” The Ministry of Labour is investigating the accident.

Songs of the Week: Superchunk Go Summering, David Byrne and St. Vincent Form Like Voltron, and French Montana Kindly Requests You Pop That