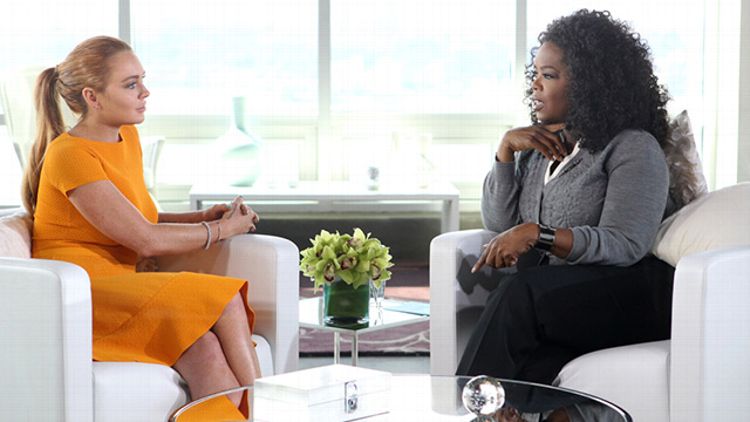 Like a lot of the best child actors, Lindsay Lohan seemed preternaturally adult as a kid. In interviews she was articulate, and on camera she knew exactly where her light was. This kind of youthful precociousness, so celebrated in child actors, does not always age well. Transitioning from a career as a child actor into one as an adult is like going from silents to talkies, or TV to film; most people won’t survive the jump. For females the penalties are especially cruel, as the countdown clock for underage actresses to hit 18 is accompanied by the expectation that they better turn out hot, or else.

Lindsay always seemed like a blowsy older woman in a younger woman’s body. In retrospect she probably constructed her idea of womanhood from the example set forth by Dina Lohan, whose most defining characteristic is that she lied about being a Rockette. All smart children believe that adults are their peers, but finding out that cross-generational friendships can extend into exploitation is something you learn from experience. Dina’s dead dreams of being a famous showgirl were realized through her daughter, and Lindsay turned out not only hot, but stacked. As if overnight, she was on the cover of Rolling Stone showing off her new assets. Like many teen idols before her, she no longer wanted to be seen as childlike or innocent. Barely legal and world-famous, she aggressively pursued her new sex-symbol status. As one of America’s most famous teen stars, Linsday had access to a world of vice and wealth that her former suburban Long Island classmates could only dream about. During those weird Bush years when TMZ started pushing the limits of American tabloid acceptability, Lohan, along with Paris Hilton and Britney Spears, stumbling out of clubs, defined a whole sector of pop culture. It is hard enough to grow up without everything being documented on camera for others to judge. Take someone with an addictive personality, whose whole life has been shaped by the validation they receive for being photographed, with a chaotic family life and parents who both seek the spotlight, and thrust them into a world of adult responsibility, surrounded by hedonistic adults. Who could turn out normal?

In previous comeback attempts, Lindsay Lohan has always displayed a complete inability to take any responsibility for her own actions. She could not see how the consequences of those actions were here fault. It was always someone else’s fault. But when being dishonest about her own problems, Lohan seemed so utterly convinced that she was right. This brought up several possibilities. Was she a compulsive liar who knew the truth? Dina Lohan lied about being a Rockette all through Lindsay’s life; perhaps lying was learned or inherited behavior for Lindsay from a young age. Was she a mentally disordered narcissist who’d been coddled by stardom into believing the world did revolve around her? Or just a young person who believed she was invincible because she had not yet encountered her own mortality, an addict in deep stubborn denial that she is really an addict? But Lindsay only played the victim, always treating court and rehab like a joke. It was frustrating to watch her throw away the opportunity to get well over and over again, and also familiar, like watching a friend relapse. No matter how close she skated to it, Lindsay never quite fell completely into the void. And besides, she was so young. While Lindsay had youthful stubbornness and oats-sowing as a plausible excuse, it was more difficult to explain her parents’ behavior in the wake of their daughter’s numerous troubles. Instead of helping her recover, they seemed eager to sell their daughter out at every opportunity. Michael Lohan sold taped conversations he had with Lindsay to a tabloid more than once. Meanwhile, Dina attempted to piggyback from Lindsay’s fame into a Kris Kardashian type of empire with a reality show called Living Lohan in 2008, in which she tried to pimp out her other daughter, Aliana, as a model. Dina Lohan always exhibits total cluelessness that she comes off as a cross between Mama Rose and Amy Poehler in Mean Girls. Rumors paint her as a fellow addict and Lindsay’s biggest enabler, too close for Lindsay to recognize.

Into this pandemonium walks Oprah “God Mode” Winfrey, who invited Lindsay to an hour-long interview on Oprah’s Next Chapter, equipped with all the tough questions, encouraging statements, and mentoring expertise that could possibly save Lindsay. And for once, Lohan takes some responsibility for her actions. Sort of. For some of her actions. You wish more than anything that Lindsay were hooked up to a lie detector during the interview. Addicts are practiced liars, and Lindsay had practiced lying with judges, parole officers, and interviewers for glossy magazines. She practiced lying for a living, as an actress. Oprah is prepared for this. Her questioning stare penetrates into Lindsay’s soul. Lindsay is open-minded but sometimes still closed off. She is actressy. She name-checks Judy Garland, and says camera “cah-mer-ah” like Jenna Maroney.

In the interview, Lindsay admits for the first time that she is an addict. She says alcohol is her drug of choice, and that it served as a “gateway” to other substances. Oprah asks if Lindsay is addicted to “chaos,” and Lohan admits that she is. O floats the idea that LiLo’s parents’ fights and drinking problems might have contributed to chaos and addiction feeling “normal” to Lindsay. Still, Lindsay blames a number of factors for her descent into addiction: her early fame, moving to L.A., being surrounded by lowlife groupies. She admits that she’s addicted to the attention that comes with being famous. She keeps citing a new “spirituality” that she’s embraced. Oprah calls bullshit on the spirituality, making sure Lindsay knows that spirituality is “self-awareness,” and not just blaming your issues and failures on a higher power.

Most tellingly, Lohan blames a “lack of self-will” for her continued addiction. She never got well because she never wanted to get well. She felt like she was being punished unfairly for things that civilians would get away with. She rationalized continually that she was just acting out and finding her boundaries, the way most kids get to do in college. At a certain point she outgrew the college excuse, but she kept using it. The partying seemed to intensify even more over time as she acted less and less. She started accepting paid gigs as a celebrity spokesperson and had fillers injected into her face, aging her into an alien person.

Even at Oprah’s behest, Lohan will not say a bad word about her parents. Perhaps Dina also instilled “stop snitching” in Lindsay from birth. Lohan cops to “creating this whirlwind of garbage for myself” and chalks up the crazy phone call in which she told Michael Lohan that Dina was on coke, and he taped and sold it, by saying “I was just … on one.” Oprah asks her to clarify the meaning of “on one” and Lohan says she “hadn’t slept enough” and was “acting out.” And while not sleeping enough and acting out might carry you through most of your twenties, most people do reach an event horizon when being self-destructive suddenly holds less allure.

Oprah keeps guiding Lindsay toward the word “tired,” pushing Lohan to admit that she’s bored with repeating the cycle. Lohan claims this is the first time she has ever tried in earnest to get well, and that previous rehab tries were mostly for show. She has always known she had a problem, but she is finally coming to terms with it. She is sober, including prescription drugs. While it’s likely that illicit pills were mixed into Lohan’s late nights, she had a legit prescription for Adderall. Anyone who has taken Adderall will tell you that it is basically speed that is legal for some reason. She also briefly admits to an Ambien phase, but says she got out because it was too scary, echoing drug-scene vet Jack Nicholson’s words that Ambien is some scary shit. (Jack said he once took it “and almost drove off a cliff” while asleep.)

While Lindsay seems lucid and committed to recovery, there are still a lot of problems with her story. She admits to cocaine use, but when Oprah asks how many times, she says “ten” and then fudges it to “fifteen.” Sally Jessy Raphael, live-tweeting while watching the show, said “10 to 15 times? A night maybe. lol” But it’s a start, and if Lindsay still doesn’t seem to believe that she is, like a judge told her, “no different than anyone else,” she at least believes in Oprah’s belief in her recovery process and reassurance that Lohan is a talented actress who has yet to reach her full potential. Oprah even praises Linds at the expense of Kim Kardashian, suggesting that some celebrities have no real skills, but that Lindsay still has raw talent to burn, even having burned up so much.

The Canyons is a good start, and a spoiled cameo on Eastbound & Down is worth hearing about just to know that she showed up on time. Her run on Chelsea Lately was received surprisingly well and proved she still has comedic timing. Lindsay seems to be trying this time, and Oprah knows that Lindsay does not want to let her down. She even talks Lohan out of a planned Europe trip, reminding her that Europe is a land of “pleasure” and temptation. The fact that she’s finally off Adderall shows that she’s going to see what happens if she listens to somebody else. She claims she’s going to try out restricting her self-will, which has hurt her as much as it propelled her forward. And so far she hasn’t slipped up, but it also hasn’t been very long. While she looks much healthier than she has in years, Lohan unfortunately stopped off at all her beauty clinics before doing Oprah, eight days after completing her three-month stay in rehab (her sixth total rehab attempt). She sprayed everything on her face orange, and her dress is orange. She has obvious lip injections, and her lip color is a peachy nude that is the exact same color as her face. She looks slightly like the Annoying Orange. Her unconvincing tan makes her apology seem slightly less sincere, but it’s her life. She can be orange if she wants to. Sure, we’d prefer Lindsay pale and ginger, her face free from surgery, like she was in Mean Girls, but there’s no turning back time. There is only the future, hopefully incorporating the lessons of the past. Good luck.

The Calling Singer Alex Band Was Abducted and Beaten in Michigan