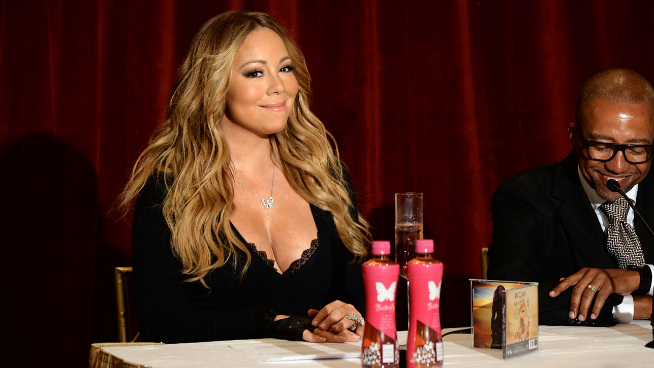 When Mariah Carey isn’t recording critically acclaimed (if commercially disappointing) albums, posting amazing photos of herself wandering around New York in ball gowns, making Vines of herself helping injured friends through the rain, taping an NBC special, posting new photos of her adorable twins at their site, Dembabies, and generally partaking in FESTIVITY!!, Mariah Carey is expanding her empire in other ways. The latest addition to the world of Mimi? A Mariah-endorsed drink called Butterfly.

Now, Mariah already has a perfume line that includes scents with Mariah-ish names like Dreams, Forever, M Ultra Pink, and the diffusion lines Lollipop Bling and Lollipop Splash in flavors like Vision of Love and Honey. But this is different. This is a “new interactive beverage” in something called a Go N’syde bottle. Interactive, because you can apparently scan the bottle with your smartphone and get web content and access to a social network for all things Mimi. The drink is also described as “a melodic beverage inspired by the magic of Mariah Carey.” The copy on the side of the bottle says “let this melodic blend of sophisticated sweetness lift you to your high notes every day that you pamper yourself with a sip of Butterfly inspired by Mariah Carey.” At a press conference at the St. Regis Hotel in New York City, Mariah drank the nonalcoholic pink drink out of a champagne flute.

Because Mariah failed to send a case to the Grantland offices, all we really know about Butterfly is that it’s pink, its flavor is whatever “melodic” is, and it’ll be available at Walgreens, Duane Reade, and other fine emporiums soon. So let’s guess what the hell it tastes like!

As it turns out, an actual reviewer says that Butterfly smells like “gummy bears, flowers, and Fresca,” also comparing it to “the perfume a teenage girl might wear.” The drink is more of a rose color than a bubblegum pink, and it apparently tastes “like liquid sugar-free gummy bears” with “weird floral notes — borderline soapy.” Mmm!

'Dumb and Dumber To' Trailer: Still the Opposite of Smart