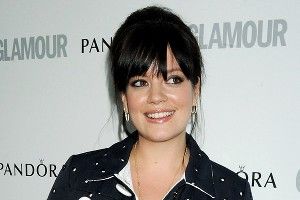 Back in the fall of 2009, about half a year after she dropped her excellent second album, It’s Not Me, It’s You, hilarious British loudmouth Lily Allen announced she was quitting music. At the time she’d been campaigning against music piracy, but not, she explained, for herself: “Just so you know, I have not renegotiated my record contract and have no plans to make another record. I do however remain a fan of new music, so this is not some selfish crusade. The days of me making money from recording music have been and gone as far as I’m concerned.” Her last performance came a year later, opening for Muse at Wembley, but she stayed in the news, opening a clothing store here, founding a record label there. After the difficult news of two miscarriages, she gave birth in the fall to her first child with husband Sam Cooper, and some of us assumed maybe we’d never hear from her again. Which would have been too bad, because she’s a sharp, smart lyricist with cushy pop hooks for days. Also, again, she’s hilarious, as evidenced by this representative slice of her Wikipedia page: “Her appearance at the 2008 Glamour Awards also generated criticism, as she showed up intoxicated wearing a dress covered in decapitated Bambi figures.” Oh and while we’re at it, here’s that time she told Elton John she was “40 years younger than you, and have my whole life ahead of me” after he sniped at her for drinking during an awards ceremony:

Isn’t that the kind of thing you could use more of in your life? It is? Well, good news, then — tamp down all that hiatus talk, because Allen has returned the studio.

The word leaked out via Twitter, of course. After Allen tweeted out support for the new album from fellow cheeky Brit vocalist Kate Nash, the website PopJustice got on her case about the lack of new music from Lily herself. And in response, Lily wrote, “you will be pleased to know that i am currently in the fucking studio with @GregKurstin” — the guy who produced her first two albums — “so SHUT UP PETER !” (That’d be PopJustice‘s Peter Robinson.) There’s no secret album all wrapped up, though: Allen then explained that it was “no big deal really, im just throwing shit at the wall and see if anything sticks.” Ah, Lily, your foulmouthed imagery sure has been missed around here.

The lesson? Shaming pop stars out of retirement via Twitter really can work! Yes, Lily was already in the studio when PopJustice called her out. But forcing her into publicly saying as much means forcing her into actually delivering new music — otherwise, she could have just gone home after the studio, popped in an EastEnders DVD and had a biscuit, and none of us would have been the wiser. So, good job, PopJustice. We shall all follow your lead, not only with Lily Allen — naturally, we will start demanding new music from her on Twitter on a regular, say, biweekly basis? — but with the next inactive musician we want new stuff from. It works! It really works.

Anyway, mostly because the title of the song is related to what the post is about, but also because I just happened to be listening to it and it’s great, let’s ride out on this one:

Partying With the Elite at The Newsroom's L.A. Premiere