Partying With the Elite at The Newsroom’s L.A. Premiere 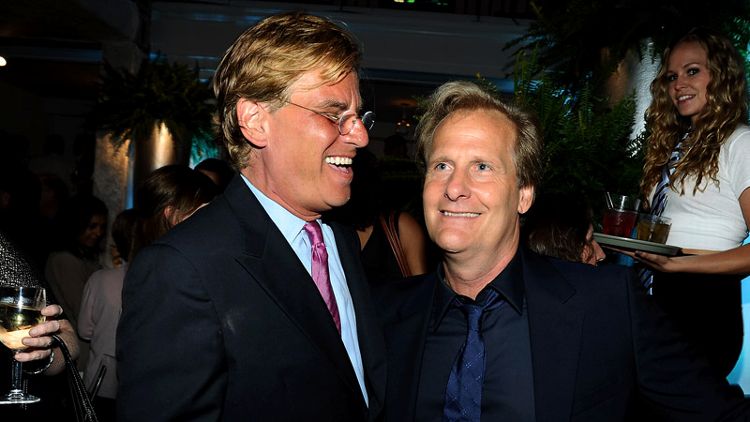 When Aaron Sorkin won his Golden Globe last year for writing The Social Network, a few eyebrows were raised by the cause to which he tipped his hat. Acknowledging the female nominees around the ballroom, he thanked them for showing his daughters that “elite is not a bad word, it’s an aspirational one.”

Sorkin’s love affair with America’s elite continues this summer with the debut of his new show, The Newsroom. The show chronicles the veritable revolt of the elites that occurs when a brilliant but deeply troubled TV anchorman (played by Jeff Daniels) and his brilliant but deeply troubled staff decide one afternoon to stop mouthing patriotic bromides to the bovine masses and begin educating them in the real, hard, statistic-heavy truth.

Wednesday night in Hollywood, the showbiz elites who created this tribute to American elites gathered for an elite red-carpet premiere at the historic Cinerama Dome, followed by an elite gala after-party and buffet, and this reporter was on hand to watch in awe.

As the crowd filed into the massive Dome auditorium, we were treated to the live feed from the red carpet just outside — the one we minor elites were directed away from lest our not-elite attire break any camera lenses — projected 80 feet tall on the Dome’s screen. Guests grazed on complimentary buttered-within-an-inch-of-its-life popcorn and stared up at the looming image of Olivia Munn chatting with reporters, like an ominous greeting from our new alien masters. Oblivious to the spectacle, Newsroom co-star Jane Fonda worked the aisle, roaming up and down greeting friends and not even trying to play it cool as though it weren’t her first premiere night in years.

Before the screening, an HBO executive took the podium, informing us that “what you will see tonight will astound you.” In his introduction, the supernaturally coiffed Sorkin opened with an apology that Olivia Munn was not actually in the first episode of the season, and so we would thus not be seeing her work this evening. When the crowd settled down from its horror, he muttered that, oh yeah, Jane Fonda isn’t in it, either.

He told the story of the moment a few years back when his agents asked what he wanted to do next. For a man aspiring toward the elite, there could only be one answer. “I said I wanted to do a show for HBO.” Sorkin said his agents retorted in jest, “That will never happen. Maybe we can get you a staff job on iCarly.” (iCarly being a situation comedy favored by idiot tweens as opposed to the sophisticated novelistic adult entertainment purveyed on the Home Box Office network.)

The show itself was Aaron Sorkin at his best and worst. Indeed, every character talked in the same smarty-pants voice and fired off the thoughts of geniuses at lightning speed. A lovers’ spat bristled with lines like “I’m making a dumb decision out of loyalty. You’re making a smart one out of ambition,” and insults such as “She’s like a sophomore poli-sci major at Sarah Lawrence” dotted the script. Central casting must’ve run out of straw men after Newsroom, because the pilot is filled floor to ceiling with declarations like “You can’t make a good news show popular!” and “No one wants to hear about the BP oil spill!”

Nonetheless, predictable pitfalls swallowed, the first episode is fairly compelling. Sorkin made a wise decision to make the protagonist, the teller of “truth to stupidity,” an unrelenting jerk, which made his speeches less soap-boxy and more dramatically conflicted. At the center of the show, the grumpy Daniels and the hard-charging Emily Mortimer find a real frisson and chemistry, and when locking horns, they pump some life back into the news show — as eye-roll-inducing as parts of the story may be, one’s heart does race.

As he entered the after-party at a nightclub down the street, Sorkin was stopped by Paul “Pee-wee” Reubens, who told him how much he enjoyed the show. Sorkin clasped his arm and said, “Coming from you, that means everything.”

While a DJ played baby boomer message-y favorites — “Burning Down the House,” “Jack and Diane,” and of course, plenty of U2 — a crowd of HBO’s golden children roamed the floor. The Newsroom cast cavorted with The Sopranos‘ James Gandolfini, Extras‘ Stephen Merchant, and Veep’s Timothy Simons. Merchant and Jeff Daniels offered each other mutual compliments. Daniels called his part “the job of a lifetime” and talked about working under the elite requirements of auteur Sorkin, explaining that “if you haven’t memorized your script by 6 a.m., he sends you home.”

As the night wore on and the passed appetizers shifted from truffle fries to churros, the man of the hour soon became a victim of his own elite status. Making his way from the center of the room toward the door, he could only advance about two feet at a time before being stopped by an effusive well-wisher who told him how much he enjoyed the show. Sorkin eventually had to explain that he was trying to get outside because he desperately needed a cigarette. What was truly elite, however, was how despite clearly fighting a rising nic-fit, he stopped and spent a good, unhurried minute or two with whoever grabbed his arm, listening and chatting before he excused himself. It took him a good half-hour to reach freedom, and by the end of his journey, those watching could not help but be impressed and moved.

Filed Under: Aaron Sorkin, HBO, The Newsroom, We Went there