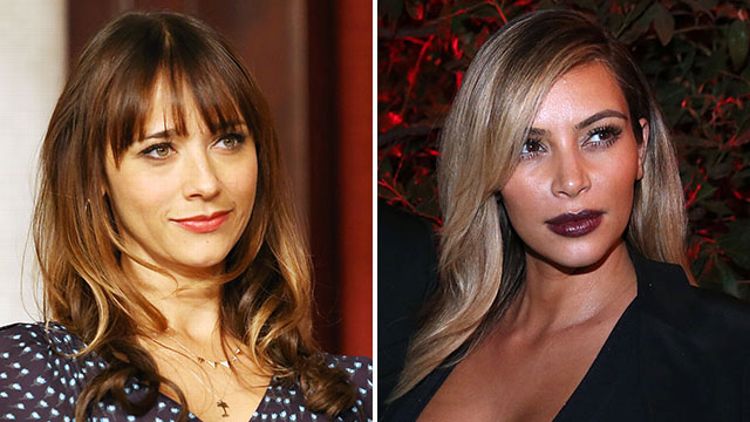 After what felt like centuries in Kardashian time, Kim Kardashian quickly whipped her body into Instagram-worthy shape and then celebrated by posting a klassic Kim mirror selfie. The photo is an off-kilter Dutch angle shot, not to imply horror but to try to make it seem casual, as if Kim had not been standing barefoot in front of a shoji screen room divider snapping away nonstop until she had the perfect shot. The chosen pic is quintessential Kim Kardashian; ass and chest torqued unnaturally toward the mirror in a superheroine pose, gazing not toward the viewer but at the all-important smartphone screen. It was Kim’s way of signaling to the world that she has returned to reclaim her throne as the selfie queen. Technology made it possible, but she made it into a career.

It’s incredibly vague where Kim is broadcasting her return from. Was the faux-casual shot taken in a dressing room? A photo studio? The back room of a sushi bar? Since giving birth to North West, Kim has been unusually quiet on social media (for Kim). There was speculation that her unexpectedly difficult pregnancy had her reevaluating the Kardashian empire and her role within it. Or that Kanye was pressuring her to take a step back from the spotlight, if only so that she might reemerge as the couture-wearing swan he’s been fashioning her into for a while.

Kim’s old habits died hard. She wore her fame-making former uniform of bandage dresses and platform stilettos throughout almost her entire pregnancy. Kim seems like she might feel most komfortable in the kind of restricting clothes that many other female humans dread. But after giving birth, Kim suddenly appeared in comfortable but chic jumpsuits, high-fashion sweats and sneakers, and other casual Kanye-influenced outfits. Then Kim joined Kanye for a jaunt to Paris Fashion Week, sporting blonde highlights and a new palette of tailored neutral. In an ankle-length camel-colored coat and big floppy hat, Kim looked cool and classic, the Bianca Jagger to “no. 1 rock star on the planet” Kanye’s Mick.

Now, Kim is obviously not the only person posting suspiciously flattering selfies on Instagram. Stars and civilians alike engage in the practice of trawling for likes by posting a cute photo of themselves, sometimes juxtaposed with another cute object to draw focus away from the transparent validation-seeking. There are plenty of factions of Instagram users, and the selfie-takers are just one of them. The former cottage industry of Video Girls has been usurped by Internet Girls, who post constant content for free in pursuit of flattery and notoriety. Kim is the overlap in the Venn diagram between Famous People Posting Selfies and People Who Are Famous For Posting Selfies.

Meanwhile, big stars of both genders post constantly, and usually include a healthy number of selfies in their stream of documentation. James Franco uses his handsome selfies to stoke interest in his artistic side projects, like new book Actors Anonymous. Come for the self-objectification, stay for the self-promotion! For actors, models, and anyone else whose appearance is their career, selfies seem right in step, but what about everyone else? The self-consciousness of having a portrait taken is mitigated by taking it yourself but amplified by putting it on the Internet.

Posting your first selfie is crossing a threshold, after which you have to judge vanity on a sliding scale cross-weighted with documentation, and maybe you just have to give up on judging vanity completely. Everyone is simultaneously vain and insecure, and while you can’t control the way your yearbook picture or DMV photo looks, you can control your own appearance in a selfie. That’s been a sticking point for arguments that selfies, particularly for young girls, are a way to exert control and self-expression over a world that threatens to take their picture without their permission and post it on a creep-shots message board anyway. So stars like Kim post their own intimate but still totally directed sexy photos, and who gets hurt? The girls who feel bad they don’t look like Kim would have felt just as bad comparing themselves to airbrushed images of pinup girls in any era.

On Saturday, Rashida Jones took to her Twitter account to rant about “This week’s celeb news takeaway: she who comes closest to showing the actual inside of her vagina is most popular #stopactinglikewhores.” She followed that up with a clarification that she was not trying to “shame anyone for anything they choose to do with their lives or bodies” but just wanted to take the cultural temperature. Then she said, “There is a whole generation of young women watching. Sure, be SEXY but leave something to the imagination.” Jones never specified who she was referring to, but most people assumed it was Kim. On any other week it might have seemed more mysterious, or possibly Miley-related, but give the timing it seemed pretty clear Rashida was taking shots at Kim. Jones scrubbed the tweets from her account, but the story was already pinging around the blogosphere like an unflattering photo butt-dialed to an ex.

There are actually quite a few similarities between Rashida and Kim. They both come from privileged Los Angeles upbringings, with high-status parents and multiracial backgrounds. They’ve both been in serious relationships with successful music producers; Jones was once engaged to Mark Ronson. They possibly even went to the private Buckley School around the same time. There’s no way their social circles have never overlapped in adulthood. Aren’t they both friends with Nicole Richie (wouldn’t you be, too, if you could)? If Rashida was subtweeting Kim, she had to know there’s a chance Kim might hear about it and konfront her.

Given similarly endless opportunities, Kim and Rashida took different routes toward success. Although spectacularly beautiful, Rashida emphasized her acting and combated charges of nepotism by just continually turning in good work until you couldn’t deny her talent. Kim became Kim (but at what kost?). It’s easy to see the situation from Rashida’s POV, but also from Kim’s. Yes, of course, it’s infuriating that women are judged primarily on appearance, and the Internet is an echo chamber that sometimes makes it feel like intelligent commentary is doomed to always be drowned out in a sea of butt GIFs, but there’s no going back. We’re in the selfie era — best to engage with its politics on their own terms.

Gloria Steinem recently weighed in with the final word on Mileygate and sagely said, “I think that we need to change the culture, not blame the people that are playing the only game that exists.” Rashida is just mad about the game, as are we all. The game is rigged. From Miley to Madonna, cries of “She’s too young to be this sexual” phase into “She’s too old to be sexual at all,” which is why I can’t really blame Katy Perry for retreating into a Christian contemporary cave rather than face aging in public as the whipped cream tits lady. You’re damned if you post the ass shots and you’re damned if you don’t. Kim got plenty of pushback, with the most common komplaint being that she’s now a mom and therefore it’s trashy to be so scantily clad in public. I can understand Kim thinking that it’s brave of her to keep doing it anyway, and I understand Rashida thinking it’s dumb that the only time culture pays attention to women is when they’re beautiful and showing us their bodies. But the problem isn’t Kim, it’s the kulture.