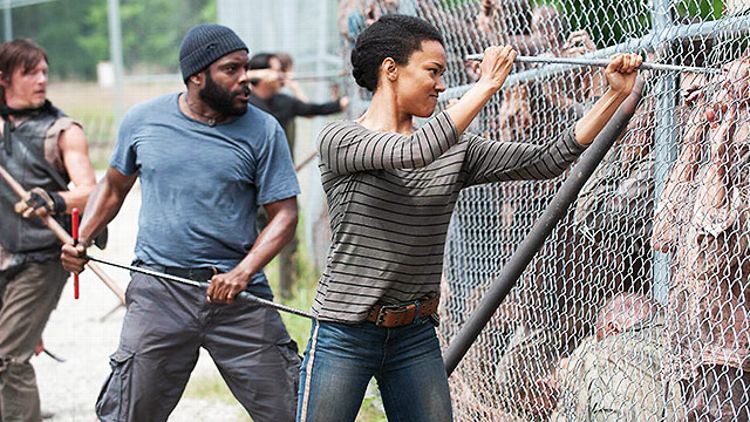 This week’s The Walking Dead seemed tailor-made to help anyone who has ever bemoaned relationship woes over a pint of microbrew IPA or Chunky Monkey ice cream (i.e., everyone) keep it all in perspective. Sure, who can’t relate to thinking you’ve finally found your soul mate, only to watch him or her degenerate into a ragged, mindless shell of a former human self whose only motivation is the next meal? But imagine all the other challenges of post-zombie-apocalypse dating! Like, after a night of moonlit Supermax cuddling, do you walk your date back to her cellblock and risk seeming over-eager? Or do you play it cool and trust that she won’t fall victim to undead-influenza … or the zombified cellmate who vectored it straight into the water supply?

Worst of all, you can make all the right calls and still find your beloved dragged from her quarantine cell and set ablaze like a Southern California hillside by some mysterious psychopath with clever ideas about vermin control. Which is to say, it is with a heavy heart that we bid adieu to Tyreese’s new squeeze, Karen, as we prepare to argue with our bookie about whether putting her on Death Watch last week merits a payout.

But Karen’s story arc this season, though brief, is not meaningless, for it leads to this week’s first of Three Questions.

Does the Three-Date Rule Still Apply After the Zombie Apocalypse?

While Karen’s murder does save us from having to hear Chad Coleman’s full repertoire of Frank Sinatra songs, it got me wondering — and not just about who has the strength and suicidal gumption to drag two plague-infested adults out and set them on fire in broad daylight without anyone noticing. My mind skipped right over that admittedly large story pothole to the episode’s closing image of poor Tyreese, heartbroken, clutching flowers like some blissfully wide-eyed Depression-era suitor as he discovered Karen’s body. But I guess it’s time Tyreese learns that chivalry isn’t an optimal reproductive strategy when it comes to love in the time of zombie cholera.

Frankly, the new Bambi-eyed additions to the cast could learn a thing or two from Beth and her novel coping strategies: Even within the secure confines of your concrete paradise, you’ve got to get busy living or get busy dying. Don’t get too attached, but don’t let what passes for love slip away. We’re all just one weak, non-reinforced chain-link fence away from watching our loved ones get gobbled up. One morning you may wake up to find that your prison dormmates have become a giant zombie smorgasbord.

And as if that’s not bad enough, Karen’s death most immediately means that the Prison Jedi Council has to worry not only about containing the zombie flu, but also about some sort of mad man. (I’m presuming this is the same person who likes to feed the Walkers jalapeno rat poppers.) Isn’t it funny how the mixed nuts always seem best suited to surviving the apocalypse? And, after hiding so well for six months, they really know how to pop up just before the credits roll. Though I should be grateful: Farmer Rick’s and Gravedigger Daryl’s soliloquies were retreading some awfully familiar territory from Seasons 1 and 2. At least this new wrinkle will give them something to do next episode. Like Michonne overthinking her exit route, The Walking Dead stumbles most dangerously when it tries to be Zombie Hamlet.

Who or What Will Be the First to Get Shot Now That Carl Again Has His Gun?

OK, this one might be wishful thinking, but after this episode’s father/son confessional moment, in which Carl spilled the beans to his dad about Carol’s questionable school curriculum, it seems like the writing staff has pulled Carl back from the dark side for the moment. This season, that role feels firmly in the hands of Carol, who gave about the best motivational speech I’ve ever heard to Lizzie, the girl who dared to name zombies. When Lizzie couldn’t act like a San Quentin lifer and stick her soon-to-turn dad after he became undead brunch, Carol condemned those flower-child ways with a simple “You are weak.” Thank god! It looks like someone else besides Beth is willing to make the necessary amendments to her personal moral code during the end times.

However, I’m not quite ready to embrace Carol as psychotherapist. There’s such a thing as too much bluntness and shouting out to the same little girl, and “you’re crying for your dad, not for the zombies” is inelegant, to say the least. Yes, we get it, Carol. And no, we don’t need you to tell us why Michonne fell into tears when holding Rick’s baby girl. Beth took care of that.

Does Everything Have to Be a Symbol?

My biggest gripe this week is reserved for our erstwhile pig farmer, Rick Grimes. I protest the way in which his PTZD (Post-Traumatic Zombie Disorder) has been presented. Queuing the mournful string section while Rick sacrifices his disease-ridden swine to draw zombies away and forestall the collapse of vital chain-link fencing seems a little — sorry, I have to — ham-handed. If anything, I was impressed by the resourcefulness and felt a high five was in order: two problems, one sacrificial bloodbath! Then, when Rick set fire to his failed pigpen while portentously retrieving guns for both himself and Carl, all I could think was Really!? You’re going to waste gasoline on that? Why not just have Carol shout out across the prison yard, “All hope for a normal life is up in smoke.”

Yet for all the hand-wringing and symbolic-fire-setting on which this episode lovingly lingered, quite a few things back inside the confines of the prison walls piqued my curiosity. Frankly, three questions doesn’t even begin to cover it: Did Patrick infect the entire water supply? Has the Jedi Council put everyone on lockdown? What kind of zombie Ebola is this that causes its victims to explode, in the artful phraseology of Dr. What’s-His-Name, like shaken-up soda bottles? And most importantly, how did Glenn’s Polaroid turn out? Here’s hoping these questions jump to the foreground next week, now that Rick’s again wearing his holster. Because the apocalypse happened three seasons ago, so I think everyone has gotten enough time to come to terms with the altered rules of existence. I’d like to see everyone actually existing, reinforcing those fences and thinning the zombie herds, rather than talking about what it all means.

Now, lest I come off as too hectoring, I’ll concede that Zombie Patrick’s midnight feast on Cellblock D led to some prime zombie kills that spiced up the speechifying. The bronze goes to Sasha for an ever-satisfying zombie skull stomp. And Glenn’s teppanyaki-style takedown of several rampaging zombies with his machete deserves accolades. But I think we can all agree that top honors go to the horde of fence zombies whose collective weight pushed their comrade’s face through the chain-link like so much Play-Doh through a Fun Factory set. (My reaction was pretty much in line with this 2-year-old’s.) Clearly, the newcomers to the prison will function primarily as the farm team for gratuitous zombie sacrifices this season. And I’m almost tempted to get cocky and predict Bob Stookey could meet his maker as early as next episode. But I’m going to play it conservative and say that anyone with a card over the opening credits is safe for an episode or two. Some conveniently anonymous survivor of Cellblock D may succumb to the fast-acting zombie flu, but one thing’s for certain: Beth won’t shed a tear anytime soon.