Judging The X Factor: Gene Simmons’s Family Jewel, an Illustrated Man, and a Bunch of People Who Could Use Some Auto-Tuning 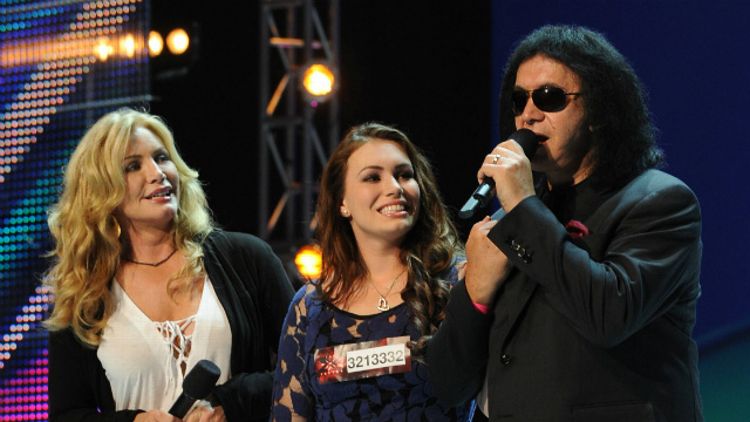 For reasons still not entirely clear to them, Grantland editors Jay Caspian Kang, Mark Lisanti, and Emily Yoshida have decided to track the second season of The X Factor. By the end of this post, one of them will have lost his or her mind. Place your bets now!

We never thought it would get this bad, but we feel compelled to remind you that there’s a little tool called Auto-Tune — apparently it’s all the rage, and although we appreciate you taking our advice from last season to cut down on the overproduced bullshit, maybe it’s time to reverse course and Auto-Tune the hell out of these talentless contestants? Because we’ve been through like five episodes now and there’s been somewhere in the vicinity of four notes sung in tune. Lie to us, Simon! Put a weave on X Factor, send it to the Butt-Lift salon, and throw it onstage with acrylics and a push-up bra! Lie to us! Take a page from baseball and ‘roid up these freaks like their name is Sammy Sosa. Please! Anything to make the parade of mediocrity stop! &#8212 Kang

Kang: There actually seemed to be some decent girls last night (Hello, 13-year-old Toni Braxton!), but the show shorted their auditions in favor of Gene Simmons (relevant!) and his daughter. To be fair, Sophie Tweed sings about as well as her father. And she seems like a cool and reasonable 19-year-old. But neither of these things make her a particularly compelling singing-competition contestant.

Yoshida: Look, all you have to do to get a golden ticket on The X Factor is carry a goddamn tune. Tuneage is negotiable if you can dance, or rap while being white. If you fulfill those qualifications and still fail to make it to boot camp, it’s almost certainly due to some shift in atmospheric pressure or the collective sugar-crash of the judges panel after a day fueled by nothing but Pepsi and breath strips. After seeing so many Yeses handed out to objectively subpar folks, and seeing Sophie, who had a pretty face and a capable, if unremarkable voice, receive a no, my only conclusion was this was The X Factor’s response to Jane Carreygate on Idol last season. The anti-nepotism story line was laid out once Sophie started talking to Fedora McJobstealer, but this was a problem, as Sophie seemed sweet and grounded and Tara Simon might be the worst? Person? Ever? (“That means a lot coming from you, Skyscraper!” BRB, reassembling the bits of my brain that are now slowly dripping down my computer screen.) I’m usually all for the bigger personalities making it to finals, but I’d rather be sung to sleep by Sophie every Wednesday night than forced to watch Tara do one more stupid push-up.

Lisanti: All I wanted was for Gene Simmons’s daughter to have the same magnificent, impenetrable head of Darth Vader–helmet hair as her father. And to end her act by spitting blood-fireballs over the heads of Britney and Demi. Neither of those things happened. And her audition was just OK; nice enough voice, interesting tone, Adele song. (Two out of three gets you to boot camp.) But if she doesn’t eventually show us more, I fear it will really be nepotism time and she’ll be headed into one of her parents’ family businesses: airbrushing the logos of irrelevant rock bands onto shoddy coffins or murder-based sex therapy.

Kang: At 2:35 in this video, Britney makes this wonderful, indescribable face. I can’t tell if she has bit into a raw onion or if she’s really emotionally touched by David Correy’s super-mediocre singing or if she has simply leaked out a hot fart and wants to look “studious” so Demi doesn’t blow up her spot. That look, by far, is the most interesting part of this awful audition. Yoshanti, has X Factor been bad enough to call an end to our death march? Come on, guys, we’re not paid by the word and the publicity people at Fox don’t seem to want us to come see the show. Let’s just end this? I can’t spend another week watching these terrible auditions knowing that they will turn into terrible weekly performances. Whaddya say we switch over to Pawn Stars?

(As a side note, I feel compelled to play the “I’m not cynical/troll-ish, I’m just more hopeful about the fate of humanity than anyone and I’m constantly disappointed” card. I know I’ve been pooping all over The X Factor, but it’s only because I remember Fantasia Barrino and Melinda Dolittle and Carrie Underwood’s rendition of that Heart song that everyone sings and Allison Iraheta and Jessica Sanchez and Joshua Ledet and “Drew.” I get verklempt every time I watch Chris Rene’s audition from last year. So far, this year’s X Factor has been an insult to the good name of singing competitions. Simon, get some real talent on there soon or I’m going to boycott these recaps.)

Yoshida: You’re in luck! Loosen that noose, Kang, and also America, for there is but one hour left of X Factor auditions! (My reaction to that news was the exact opposite of my reaction to the news that Bravo’s Gallery Girls is having its season finale next Monday; however, both involved me raising my voice at the television.) That being said, I feel it must be mentioned that while the talent hasn’t been that mind-blowing so far, Kang is curating his own disappointment here by choosing to talk about Sophie and Correy, when there were plenty of heartwarming moments tonight, via Arin Ray (still not that great, but with charisma for miles, and a lot of nerve for showing his face on television again after being forcibly hitched to the kiddy death caravan that was inTENsity last season) and Dinah Jane (Holy CRAP, that 15-year-old girl is terrifyingly good and terrifyingly not 15-looking).

David Correy is definitely not my cup of tea, but I have a feeling he will (1) make it to the finals, and (2) have some kind of post X Factor career. He has very expressive eyes that are great for television; as long as he keeps crying every 15 minutes he’s a shoo-in for the finale. But seriously, calm down, dude, lots of people are adopted, and you pretty much lost your adoptive mom’s vote for the season by declaring your mission to sing your way to your “REAL” mom.

Lisanti: I’m going to make a case for David Correy in three steps. Here we go:

1. He drove 13 hours and through not one, but two thunderstorms to reach the audition. After the first thunderstorm, I would have been like, “Man, I’d really love $5 million and the chance to fulfill all of my dreams, but these driving conditions are spotty at best. Maybe I should turn around and put my dreams on hold until the next season of The Voice; that show actually feels more my speed … No, I’m driving through it. This is worth it.” And then when I got to the second thunderstorm, I would have said, “This is a clear sign that this is not my year. What more does Simon Cowell up in heaven need to do to signal that it’s time to defer my dream, send a tornado that spins my car around 180 degrees and points me back toward the safety of home? I’m not messing with divine forces like these. There was an Arby’s about 20 miles back, let’s get a Beef ‘n Cheddar and plan out how we’re going to dominate next year.” But David Correy did not give up. He made the trip. He said to himself, “Oh, right. If I bail now, the birth mom thing might not happen either.” He got up on that stage. And he induced Britney to make that face, whatever it meant. (A mixture of empathy and admiration, if I were to hazard a guess.) David Correy is in it to win it.

2. David Correy has every possible tattoo. I bet somewhere on his cluttered body-canvas are sad memorial tattoo portraits of complete strangers’ deceased children, and probably at least one Calvin urinating on an elaborate gargoyle. He is not fucking around, tattoo-wise.

3. His plan to use The X Factor as a platform for reconnecting with his birth mother is actually a sound one. Roughly 85 percent of singing competition contestants over the age of 21 participate because they are “trying to provide for their families,” as if buying a Mega Millions ticket were sound life planning. He’ll probably meet his mom, mission accomplished.

4. He can sing. There is good singing happening there! Even if it’s not your “favorite kind of singing,” it seems authentically above-average. Four steps. I meant four steps.

5. Let’s do five: He has inexplicably broken Jay Kang’s will to live. We survived 425 weeks of Phillip Phillips, and David Correy is the soul breaker?

I kind of like this guy. I hope he finishes second to Daryl Black.

Lisanti: I kind of like this guy. I hope he beats David Correy in the finals.

Kang: I HAVE NO WORDS BECAUSE I AM MULTITASKING, MEANING I AM PUNCHING MYSELF IN THE BALLS WHILE LOOKING UP A SPIKED BAT SERVICE ON MY PHONE SO THAT WHEN MY FIST GETS TIRED OF PUNCHING MY BALLS, THE SERVICE WILL BE LIKE ONLY TWO BLOCKS AWAY, MEANING I CAN BE PUMMELED IN THE BALLS BY ONE OBJECT OR ANOTHER UNTIL I PASS OUT BECAUSE I’D RATHER DO THAT THAN EVER WATCH THIS KID RAP EVER AGAIN.

ESPN Human Resources Counselor: We have dispatched an ambulance to Mr. Kang’s apartment. Does anyone have a recent photo of him? Or can we safely assume that the guy on the roof at his listed address who’s pummeling himself in the genitals while screaming at his laptop is the distressed blogger we’re looking for? We’re here to help. Oh, now he’s rapping. It’s worse than we thought. Also, who is “Mantasia”? Is that his emergency contact?

Lisanti: Someone turned Will.i.am into the werewolf from Thriller, and I really like it.

Yoshida: Hey, this group is called ONE4FIVE, and there are neither one, nor 4, nor five of them! Why aren’t they called 2BCOME1? Or InTWOnsity? Is this like how there are only three people in Ben Folds Five? (I’m on a semi-embarrassing Ben Folds kick right now, I’m sorry. Bring back The Sing Off! No, just kidding, don’t do that.)

Cool, I’m just going to continue to sit here and pass judgement on musicians some more.

Anyway, ONE4FIVE were fun and unbelabored and rapped over a pretty booty-friendly beat, which is another way of saying they sounded like nothing I’ve seen on either season of this show, and I mean that as a high compliment.

ESPN Human Resources Counselor: As we loaded Mr. Kang into the ambulance, he kept asking, “Did Britney ever get her tiara?,” over and over again. Does that make sense to anyone? Just thought we would pass that along, whatever it means.