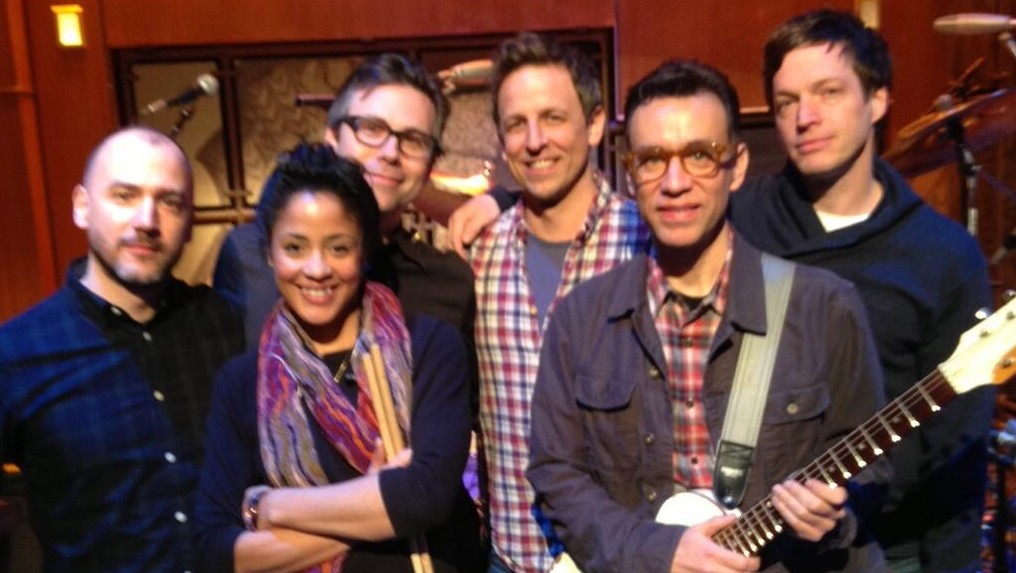 As recently as a month ago, it looked like the new Late Night might downplay the musical side of things, making a stark departure from Jimmy Fallon’s era with the Roots. And suddenly it’s a Monday afternoon and Seth Meyers is tweeting that Fred Armisen is his new band leader! “Fred will curate and lead the band, and continue to run it even when he’s off shooting Portlandia,” Meyers writes. Aside from making Portlandia with Carrie Brownstein — a rocker long before she was a comedic actress — Armisen also has his own storied history of musicianship, having played drums since high school, wound up on albums by established acts, performed with the Blue Man Group, and invented characters like Portlandia’s Pet Sounds-obsessed home studio guy and the Clash-obsessed Ian Rubbish. Splitsider has a great collection of some of Armisen’s best musical moments on SNL, as well as a rundown of the rest of the band thus far: There’s Les Savy Fav’s Seth Jabour and Syd Butler, Beyoncé session drummer Kimberly Thompson, and Girls Against Boys keyboardist Eli Janney.

Not an awesome news day for all former SNLers, though: Chris Kattan was arrested on charges of driving under the influence of prescription drugs.

Ron Howard’s next film will be Mena, “a fact-based tale about Barry Seal, a portly pilot who, in the 1980s, was a 300-pound gun runner, and drug trafficker who transported contraband for the CIA and the Medellin cartel.”

Rob Riggle will costar in The Pro, Rob Lowe’s single-camera comedy pilot over at NBC.

15.8 million people tuned in for last night’s midseason return of The Walking Dead, which is insane as ever. In the 18-49 demographic, the 8.2-rated Dead episode handily beat CBS’s Beatles special (2.2 rating) and also topped NBC’s Olympics broadcast (7.4 rating).

Speaking of the Beatles: Lauryn Hill did “Something” on Letterman. [via]
https://www.youtube.com/watch?v=j819FVqgcmI

Fox’s X Factor has been canceled. The word from Simon Cowell: “Last year, for a number of reasons, I had to make a decision to return to the U.K. version of The X Factor in 2014. So for now, I’m back to the U.K. and I want to thank Fox for being an incredible partner and I also want to thank everybody who has supported my shows. America, I’ll see you soon!”

James Franco is making a film based on a book about the making of legendarily bad movie The Room.

Sleepy Hollow will take the show on the road in Season 2.

'Silicon Valley' Teaser Trailer: If You Build It, Nerds Will Come

Confirmed: Nathan Fielder Is Behind Dumb Starbucks, and There's One Coming to Brooklyn