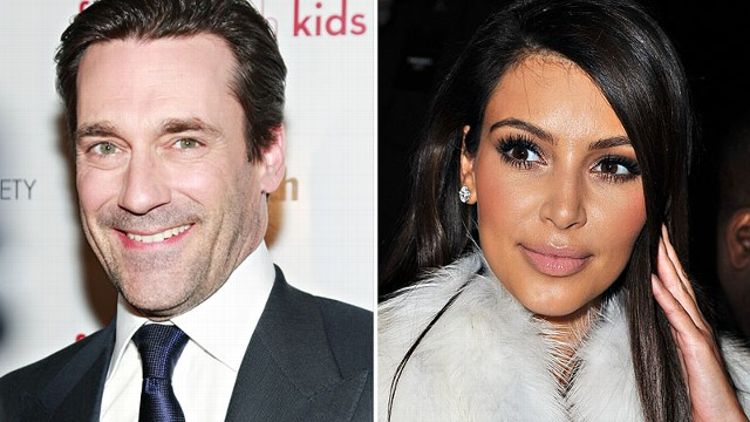 It started with a comment Hamm made to Elle UK (via EW):

“Whether it’s Paris Hilton or Kim Kardashian or whoever, stupidity is certainly celebrated … Being a fucking idiot is a valuable commodity in this culture because you’re rewarded significantly … It’s celebrated. It doesn’t make sense to me.”

Maybe a touch mean-spirited, but ultimately reasonable, right? Hamm represents Mad Men, the high-brow end of our mass-market entertainment, and if he feels the need to slag off some of the crappier, better-rated entertainment options every once in a while, well, who’s to tell him otherwise? The former Mrs. Humphries, of course. Via Twitter, Kim delivers a blistering response:

I just heard about the comment Jon Hamm made about me in an interview. I respect Jon and I am a firm believer that everyone is entitled to their own opinion and that not everyone takes the same path in life. We’re all working hard and we all have to respect one another. Calling someone who runs their own businesses, is a part of a successful TV show, produces, writes, designs, and creates, “stupid,” is in my opinion careless.

Ahh, weird beef. The best kind. But, OK, look, here’s the thing: Jon Hamm isn’t even saying Kim Kardashian is stupid. He’s saying she acts stupidly for television and general public consumption — which, really, is way worse than actually just being stupid, and having ravenous reality TV producers take advantage of that stupidity. If we’re presuming she is a self-sufficient businesswoman in her “real” life, one who makes her own informed professional decisions, that means Kardashian plays dumb in front of the camera, which means she consciously propagates a certain harmful gender stereotyp … Wait wait wait wait wait — “someone who … writes”? Kim Kardashian “writes”?! Take it back, Jon! Take it all back!