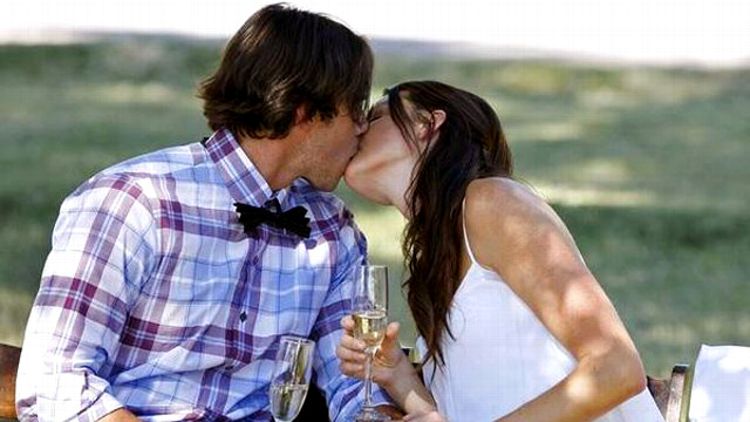 So it’s all over. One of the final two bachelorettes arrived at the mountaintop, only to be denied the nourishing rays of Ben Flajnik’s continuing romantic regard and banished (probably via ski lift; copters are for closers) to the chalet of loneliness to soak in a lukewarm hot tub shaped like a broken heart, wondering where it all went wrong. The other got her proposal with the majestic Matterhorn bearing witness to our Bachelor’s declaration of Forever Love (“You are my Forever” shall certainly go down as this generation’s “You complete me,” though it must be delivered with a hair flip to honor its author), a proposal bearing a solemn promise of at least, like, five more dates and a joint after the Final Rose appearance, and the total satisfaction of knowing her perfectly executed strategy delivered a victory in The Game that was never in doubt. In this, the final installment of blog-based Bachelor School lessons before I have to prepare for the launch of my consulting firm for future Rose Collectors (you really need to see the 30-foot ice sculpture of Chris Harrison in the courtyard; keeping it intact in the Los Angeles heat is an astronomical expense, but worth every Cougarlife.com promotional dollar), we’ll take a look at the lessons that can be gleaned from this season’s thrilling endgame.

A Bachelor’s participation on the show generally signals some very profound mommy issues — what trauma in the primary female relationship of his life drove him not only to seek out the approval of 32 damaged women, but to pit them against one another for the chance to love him? — so winning her over is of utmost importance. If you’re the “nice” finalist, charming the family will be effortless; despite whatever emotional damage led you to subject yourself to this ritualistic, televised humiliation, you’ve managed to get most of America on your side just by being you. If you’re the “winning” finalist, your sociopathic tendencies need to be masked; study the behavior of your competition and do your best to replicate it. If she “lights up a room,” torch that room with the white-hot incandescence of your confidence. If she’s sweet and humble, well, fake that shit as best you can. You must win the Mom Round at all costs.

2. THAT BEING SAID … continue to execute your plan. It’s gotten you this far. It will carry you to victory.

Now is not the time to get cute with strategy. You’ve already established, with wild success, your tactical tentpoles: False Introspection, Empty Apologies, Simulated Honesty, Alleged Learning About Yourself, Emotional Reversals, Sexual Firepower, Being a Model, Putting Out. These are already in your toolbelt. Unholster and deploy as necessary, confident in the mastery of each achieved over the previous months of cutthroat competition.

There is literally no end to the benefit of Being a Model. Even now, in the endgame, with the rarefied mountain air infused with the faint but delicious taste of diamonds, this is your most valuable quality. Can the other finalist be a model? Not now. She can’t sneak down into Zermatt, offer to pose with some watches or cheese, and credibly claim that she is now a model; such a move would be transparently desperate. Modeling is all about confidence. Suddenly presenting your look book, filled with hastily composed images of you among gift shop timepieces and two-pound wheels of Jarlsberg, would project the opposite. Do yourself a favor and be a model from the moment you first step out of the limo, or don’t be a model at all.

Guys just don’t care about horses, with the infrequent exception of the times they are wagering on them. Once it’s established that you’re a “horse person,” what are you going to talk about? The steeplechase? Riding crops? Jodhpurs? Furthermore, you’ve consigned yourself to endless rides in horse-drawn carriages during your one-on-one dates. You probably hate horse-drawn carriages, as they represent for you the degrading subjugation of nature’s proudest animal, with every sad hoof-clap upon a cobblestone road the echoing sound of equine slavery, but to him it’s, “Hey, she likes horses, I better find a horse pretty quick,” and here comes another fucking hansom cab on your final day together. It’s best not to play up that part of your life. (Also, it never helps that you’ve spent a lifetime around animals with enormous genitalia; if he were really so confident in his penis, would he need a broadcast network to set him up on dates?)

This is the truth of the matter: His mind is already 99 percent made up. On your final date before The Decision, sudden breakthroughs will carry no weight. “Oh, how nice that she’s ‘opening up.’ It only took 10 helicopter rides, 15 picnics, and some mediocre, champagne-lubricated Fantasy Suite Jacuzzi sex for her to decide ‘her walls are coming down,'” he will not think, because he’s already been sleeping with the model for so long they’re already incorporating those creepy sex-swings into their relations, and he’s wondering if the support brackets will hold in this chalet doorway. No amount of Hail Mary’d “I love yous” will sway him; if your strategy hadn’t already worked wall-destruction and calculated openness into earlier rounds, you’re out of luck. And, in the name of all that is Good and Holy, if he doesn’t hand you the final rose, Do. Not. Tell. Him. To. Call. You. If. “Things Don’t Work Out.” “I love this other woman more than you,” he says, bringing to an immediate end an emotional journey that has spanned continents and every conceivable spelling of common female names. “That’s cool, I just want you to be happy,” you awkwardly respond as you retrieve your cape from a downcast Chris Harrison and are ushered into the gondola waiting to whisk you back to your suddenly love-bereft life, adding, “I think we can totally work through this!” as you descend out of sight, your muffled final plea mingling with the plaintive bleats of the mountain goats. “Call me.”

Yeah, don’t do that.

6. Write him a letter from your heart and tuck it into a Memory Book.

Yes, we’ve already established that Romantic Scrapbooking is a suicide move. BUT: (1) If you’re a model with a stranglehold on victory, and not, say, a VIP cocktail waitress glue-sticking her desperation to some construction paper, and (2) you’ve lasted long enough to have something resembling a “history,” truncated though it may be, and (3) you get the producers to include at least one not-for-broadcast image of your lovemaking atop an ancient Mayan temple, THEN you may bust out the Memory Book (let’s call it that instead) as a coup de grace. By this point, you’re probably getting a little bored, and flirting with such danger will keep you tactically engaged long enough to get to the mountaintop proposal without a more significant act of possible self-sabotage. And remember how the vows from your Possibly Legally Blinding Practice Wedding were cribbed from Carrie Bradshaw? This time, put a little more effort into your composition. It will show “growth” and “progress,” and there’s no way he’ll figure out the “letter from your heart” contains nothing but lyrics from deep Wilson Phillips cuts.

7. When the ring inevitably arrives, pretend it’s exciting to you.

Yes, you’ve been a model for a long time, and they’re always draping you in jewelry and shit. (Too often it’s been from the Sally Jesse Raphael collection at Sears, but modeling is modeling to our Bachelor; he’s always wanted to have sex with a model, so whatever.) But when he finally produces that little box containing his personal choice from up to five reasonable options from the Forever Love collection at Jared, feign excitement. Sure, you’re super over the Matterhorn, get that fucking thing out of your sight already, it’s not even that great a mountain, does it even have Sherpas? And yes, the outcome of this competition has never really been in doubt, given your flawless execution of the greatest game plan ever devised by a reality show contestant. (Richard Hatch, you’ve thought at various times during the season, can suck it.) Still, you went through the trouble of winning, so some tears are in order, a few kisses, a credible-enough declaration of love. Just get it over with. You owe him that much, sort of, but not really. He’s always wanted to be briefly engaged to a model. Isn’t that enough?

Congratulations! You’ve won. There’s nothing left to gain. Time to shut off the booty spigot and move on with your soon-to-be post-broken-engagement life. See you on Bachelor Pad, eventually!