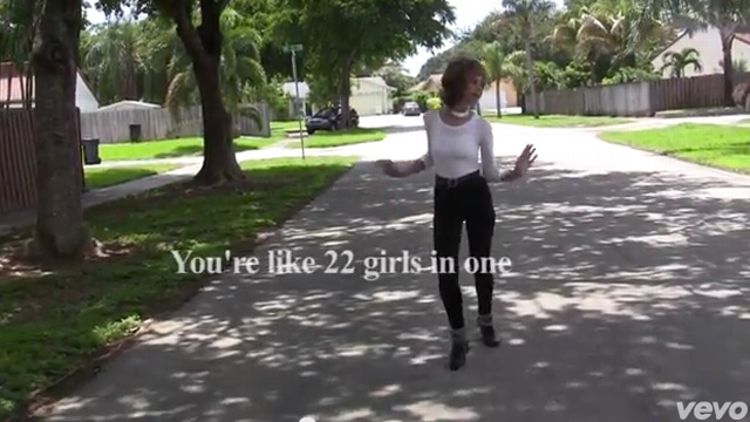 Because it had been too long since he burnished his leave-a-pretty-girl-sad reputation, John Mayer just released a new single called “Paper Doll” to accompany an announcement that he has a new album called Paradise Valley coming out on August 13. Judging by the cover art, he is aiming for the Empire Strikes Back of his Ditch Trilogy, following last year’s folksy roots-rocker Born and Raised. Mayer underwent vocal surgery and couldn’t perform for two years. He recuperated in Montana, and Paradise Valley is his tribute to the area.

The charming lyric video has newly famous fitness guru Joanna Rohrback prancercising her way down a green suburban street to the tune of Mayer’s new song. The lyrics tell of a mystery woman who is “22 girls in one” and wears a “scarf, Moroccan red,” a cryptic but tellingly intimate detail along the lines of “your scarf, it was apricot.” Based on those clues and a couple others, “Paper Doll” was immediately and widely speculated to be about Taylor Swift, in belated response to Taylor’s confessional song about Mayer possibly having hit-and-quit her, “Dear John.” Just a year ago, Mayer criticized Taylor for kissing and telling, saying “I will say as a songwriter that I think it’s cheap songwriting.” So either he changed his mind or decided that there’s nothing wrong with cheap songwriting, since it generates cheap press like this.

Speaking of press, Mayer’s most recent actual girlfriend, Katy Perry, just landed her first Vogue cover. Alongside a lavish Annie Leibowitz pictorial of Perry as a farmhouse Gibson Girl in red velvet and Rodarte is a stilted but revealing interview with Perry about her life and loves. She talks with unflinching bummedness about surprising her then-husband Russell Brand at stand-up shows only to witness him doing jokes about her. She takes the interviewer to La Super-Rica and reminisces about hanging out there as a teenager with her surfer friends every day after the beach. She admits that although she and Mayer have broken up she is still “madly in love with him” and says he has “a beautiful mind, tortured soul.” She opines that sometimes men can’t deal with the power she has over her career or how much of her life it occupies.

She goes into the demise of her marriage to Brand, whom she says she hasn’t spoken to since “he texted me saying he was divorcing me.” She also drags him a little: “At first when I met him he wanted an equal, and I think a lot of times strong men do want an equal, but then they get that equal and they’re like, I can’t handle the equalness. He didn’t like the atmosphere of me being the boss on tour. So that was hurtful, and it was very controlling, which was upsetting.” She doesn’t go into detail, but sort of admits that she took responsibility for the relationship failing until she found out “the real truth,” which she chooses not to tell but may involve his alleged cheating on her toward the end of their union.

Katy plays the profile’s writer a new unreleased song called “Bad Photographs,” which she admits is about Mayer. Her explanation for the title is that sometimes it’s hard to stop romanticizing a failed relationship, and it would be helpful to have documentation of the horrible times that caused it to fail. The tabloids have had Perry rebounding from Mayer with longtime friend and newly single dude Robert Pattinson, but then Mayer and Perry were spotted together again around Memorial Day. Whether she and Mayer are together right now or not, she may have felt slightly punched in the stomach when she realized his new single was about Taylor Swift and not her. I’m sure he’ll write songs about Katy, too, but he probably won’t release them until right when she’s just about to finally get over him.

John Mayer and Kanye are just as bad as Taylor when it comes to stoking public curiosity by hiding private information in their songwriting. But most artists do that to some extent, and it goes with the territory of self-expression. Mayer, Swift, Perry, and Yeezus just happen to be unbelievably famous cultural avatars for sex, love, power, and money. Famous people conducting their personal business in front of everyone like that attracts the voyeur in all of us. Far from Mayer’s assertion that it’s “cheap songwriting,” it can actually be quite expensive emotionally. What the hell must Kim have thought when she finally heard Yeezus?

A work doesn’t necessarily undermine its credibility if it’s about a specific person. It can be distracting, but it’s usually just a top note of information and the song still speaks for itself. “November Rain” holds up whether you followed Axl Rose and Stephanie Seymour’s relationship or not. John Mayer’s solo on Channel Orange demonstrated why he’s actually famous: for being really sweet at guitar. Will Taylor Swift take the bait and write an answer song to his answer song? Will they go back and forth and sideways with Katy and Kanye until they’ve produced more answer records than the Roxanne Wars? They all know exactly what they’re doing, and they know we’re looking. They want us to watch.

Small(er) Movie Roundup: Because There's Life After Man of Steel