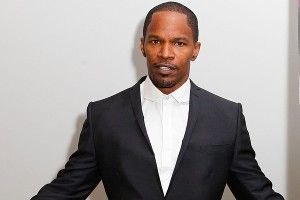 Jamie Foxx has lined up a splashy post–Django Unchained gig: Variety reports that Sony has booked the once and future Willie Beamen as the villain Electro in The Amazing Spider-Man 2. As Foxx tweeted, “Dressed up as Electro for Halloween last night. Costume fits well.” So he’s just going to bring a costume from home? Smart cost-cutting move, Sony!

By the way, after Eduardo Saverin’s first go-around as Peter Parker netted $751 million worldwide, looks like the studio’s raring to go again. They’d already gotten director Marc Webb back, and a script in hand (credited, in true blockbuster fashion, to “Alex Kurtzman and Roberto Orci, as well as Jeff Pinkner, based on a previous draft by James Vanderbilt”). And now they’ve got a bad guy, too. As Variety explains, “Electro is the alter ego of Max Dillon, an enemy of Spider-Man who gains the ability to control electricity after being struck by lightning … In The Amazing Spider-Man’s post-credit sequence, set inside Dr. Curt Connors’ cell at an asylum, the Lizard is approached by a mysterious, shadowy figure (Michael Massee) who asks if Peter Parker knows the truth about his father. Lightning features prominently in the scene, prompting auds to speculate that Electro would be featured in the sequel.” Boom, they were right.

But what if, as all too often happens on these things, scheduling problems/creative differences/arguments about what kind of bagels should be at craft services lead Jamie to drop out? In order to make sure Spidey 2 (non–Tobey Maguire division) stays on track, let’s go ahead and identify some replacements now:

Option No. 1: James Franco He’s already in everything and game for anything, plus he remembers how to try to kill Spider-Man from his turn as Harry Osborn in the previous trilogy. And if Franco’s not available, let’s try Spider-Man villain Willem Dafoe, Spider-Man 2 villain Alfred Molina, or, just to really mess with people, Tobey Maguire.

Option No. 2: Diddy Remember how Puffy got swapped out on Any Given Sunday by Jamie, supposedly because the former didn’t look convincing throwing a football? Well, the time is now to return the favor, Sean Combs. Who says Jamie looks convincing being able to control electricity?!