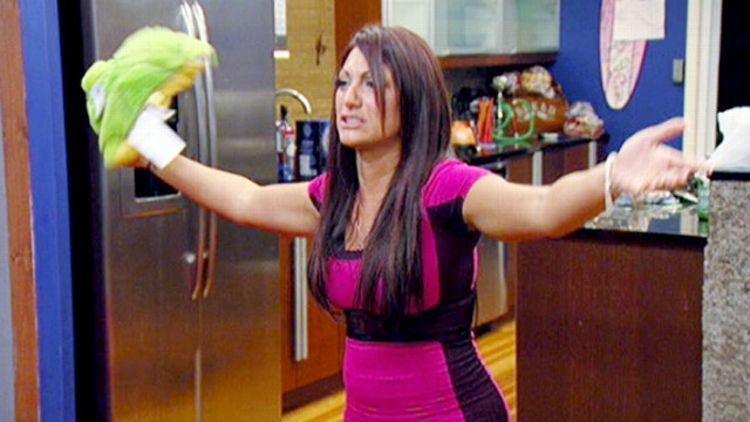 Imagine you woke up one morning and the sun didn’t rise. Imagine looking in the mirror while brushing your teeth and seeing someone else’s face. Now imagine it is 10 p.m. on a Wednesday and there is no Challenge on MTV. All of those things happened this Wednesday.

Deena (Jersey Shore, Kang), 31 Points: Go home, Deena, you’re drunk. As you get older (read: get a job) you realize that it isn’t the ability to push your alcohol-consumption limits that makes for a good time, but rather it is the ability to mediate said alcohol consumption.

Quick story: I was eating lobster miso soup (I fux with lobster miso) one day by myself in midtown Manhattan when an elderly lady next to me struck up a conversation. I had just bought a newspaper with the intent to read it, so I had no interest in listening to her go on about her granddaughter in law school or whatever. But she was a sweetheart, so we chatted. To be honest, I don’t remember her name, where she was from, if her daughter went to law school — all I remember is one thing that she said me:

“You know what the secret is, young man? Moderation in moderation.”

Now, read that again. Not exactly sure what it means, but it sounds badass, right? Well, on this episode of Jersey Shore our little friend Deena was certainly not moderating her moderation.

Those of you who read the GRTFL a couple of weeks ago remember that Deena was arrested, stuffed in the back of a police car, and put in jail on national television for being an inslopsicated, mumbling, dancing blob of a human. Such an event would cause even the most Keith Richards-y of folks to downshift for a couple weeks and rewatch The Wire or something. Not Dionysian Deena. Dionysian Deena does not moderate. Deena is very Kendrick Lamar with it. Sit down? Drank. Stand up? Drank. Pass out? Drank. Wake up? Drank. Faded? Drank. This particular unmoderated dranking session started with the sun high in the sky and Deena saddling up with Ronnie and whatever strangers happened to walk by with a sacrificial offering of get-right juice for their Dionysian demigod. It was all a dancing, oversharey good time, but as the sun started to fade, so did our Deena. She slurred, she threatened to leave the show (15 points), she blacked out. And, as always, she was back at it the next morning.

When the sun rose, there was lone meatball Dionysian Deena, taking more shots than Ray Allen before a playoff game. This time, however, was different. Her blank stare even blanker, her off-beat two-step even off-beatier, and her inslopsicatedness even inslopsicatedier. She did not moderate nearly enough. Her friends/handlers Ronnie and Sammi tried their hardest to accompany her through the early afternoon, but where she was going there was no accompanying (9 points). Conceding they had lost her to the bars of the boardwalk, Ronnie and Sammi left our demigod to her own devices. Bad call. I first thought that abandoning a slammered cohort was a violation of international drinking-buddy code, but what Sammi did next was an insult to the word “violation.” I can’t even explain it, let’s get right to the quotes:

Note to self: Never rob a bank with Sammi from Jersey Shore. That hussy will sell you out for a glass of water.

Blair from Facts of Life (Survivor, Connor), 10 points: Remember Blair (Lisa Whelchel) from Facts of Life? No? Well, no one else from Survivor does either. The merge was this week, and only one dude recognized her from her past as “the prissy one.” That dude was Penner. She was more than happy to cop to being Blair (10 points) and even happier to go on a little swim with her new buddy. Keep in mind that she said the following after spending about an hour with someone she just met on a reality show in which the ability to build trust and then violate it is paramount:

Blair from Facts of Life on Her Hour With Penner: So, Penner is aware of my past as a child star, but we didn’t talk strategy. And, um, if we weren’t on this island we would have a really great time just over lunch talking about each other’s lives. To have that kind of connection? … It is very healing in a really deep way. You know I really didn’t anticipate that would be something that I would take from this.

OK OK OK. When I watched this I was dumbfounded at how a woman who was over the age of 14 could speak in such a delusion-sauced manner about someone they just met — and then my wife did some Googling.

Turns out Blair got divorced nine days before going out to the Philippines. And check this out: “Lisa was married at age 25 when her father hand-picked Steven.” And after Facts of Life, she never acted again? And she home-schooled her kids? Oh, OK, now I know where the California Zen-ish mumbo jumbo delusion sauce comes from. Carry on.

1. Vinny wears a winter hat in the summer like he is Eazy-E.
2. Girls do their errands.
3. Mike is shocked he can’t keep a low profile.
4. Vinny and Pauly D go to a photo booth. (This was a full segment, by the way.)
5. Snooki cuts cutlets!

Abi and RC (Survivor, Jacoby and Kang), -5 points: Former BFFs Abi and RC got into this adorable little squabble (5 points) at tribal council:

Abi: We found the clue for the immunity idol together, and we hid the clue together, however, she unburied the clue without telling me, so I cannot trust her.
RC: I didn’t unbury anything. I didn’t touch anything.
Abi: I mean, it wasn’t me.
RC: And it wasn’t me! I thought it was you, but you blew up and you wouldn’t have a discussion with me.
Abi: I trust my actions, not yours.

A great finish. Rarely does the person with absolutely no logic on their side win an argument, but Abi did a great job there. They both lost 10 points for flair on their vote cards, and RC was eventually voted out. RC was this year’s annual personification of the ol’ Survivor icky feeling in your soul when you realize that everyone on the show looks more attractive after starving themselves for three weeks. I have no idea how we got here as a society (nor do I care to theorize), but I know what I know, and I know I like looking at the cast more now than when they weren’t starving. If that makes me a shallow, superficial, unethical, brainwashed product of a broken society, then so be it.

Skupin (Survivor, Connor), -10 points: Skupin lost 10 points for putting some weird circle thing on his vote card and putting “SAC” in the corner. It took a while to finally figure out what SAC meant. SAC stands for SHOW ANOTHER CHALLENGE!

Check back next Friday, when Real Housewives of Beverly Hills will be added to the mix. I am neither ashamed nor proud to say that it is one of my favorite shows on television. ‘Kay, fine, a little ashamed.