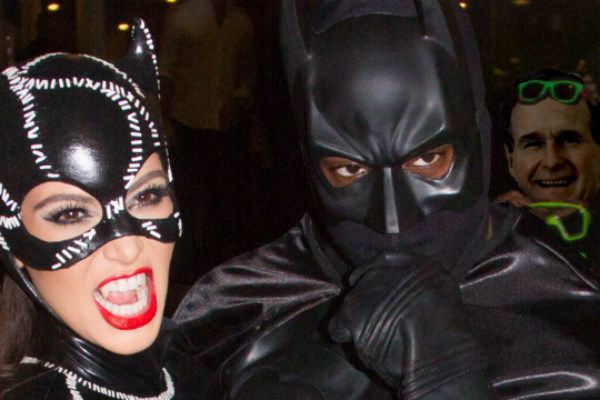 [Update: The official Twitter presence of Def Jam Recordings has denied that this is the Cruel Winter trailer. Did we fall for an Illuminati trick? Everything we have ever believed is a lie.]

We’ve known for about a month (thanks, Q-Tip) that Kanye West is maybe (probably) making a follow-up to his G.O.O.D. Music showcase album Cruel Summer (released in September) and calling it Cruel Winter. Yesterday an official-looking video clip billed as a “Kanye West: Cruel Winter (Short Film Trailer)” popped up on the Vimeo page of New York director Austin Christianson, who’s shot promo clips for Rihanna, Wiz Khalifa, and Chanel. It’s a 53-second montage of gloomy nature footage (bare trees, ponds reflecting The Road–ish overcast skies, dead leaves rattling in the wind) set to spooky, dissonant orchestral noises and a sample of George H.W. Bush talking about the “New World Order.” It does not contain album-release-date information, rap music, or images of human beings, but as a pure mood piece it’s effectively chilly and will probably make you want to reach for a (very expensive) sweater.

Remember that to promote Cruel Summer, Kanye co-wrote and co-directed a 35-minute Arabian Nights–inspired, Qatar-shot movie starring Kid Cudi as a Lamborghini thief and screened it at the Cannes Film Festival in a very, very special multi-screen viewing pavilion. If and when it arrives, the actual Cruel Winter short film will almost certainly be similarly crazy. In the meantime, though, we’ve got this, which is pretty much the Tree of Life of less-than-one-minute-long teaser trailers for as-yet-unreleased short films promoting as-yet-not-officially-announced albums from ad hoc rap “crews” that exist as an extension of some dude’s personal brand. Please allow it to wash over you in the viewing pavilion of your choice:

So, a couple notes: The music sounds familiar because it’s a snippet of Hans Zimmer and James Newton Howard’s Grammy-winning score for The Dark Knight. Specifically, it’s the sound of a cellist sawing away very slowly on a single note at the beginning of “Why So Serious,” the deliberately unpleasant theme music Zimmer composed for Heath Ledger’s Joker. This swipe probably means nothing, except maybe that Kanye wants to position Cruel Winter‘s release as a blockbuster event on par with a superhero-movie sequel. (Dark Knight has pulled in more than $530 million domestically since its release in 2008.) Then again, there may be some super-interesting Kanye-ish reason why West has Bruce Wayne on the brain right now; he and girlfriend Kim Kardashian cosplayed Batman and Catwoman (the Michelle Pfeiffer/Batman Returns version) for Halloween this year. Either Kanye is following in the tiny footsteps of another self-aggrandizing black pop genius by comparing himself to both Batman and the Joker, or he’s trying to tell us that he just wants to watch the world burn (in a fire lit by the red-hot career of G.O.O.D. Music recording artist Big Sean!). Also, it is probably not worth noting that this mixtape exists, but apparently it does. Shout-out to Photoshop. Shout out to Bat-nipples.

Let’s face it, though: The only thing anyone’s really going to wonder about until the actual short film drops is the hot guest verse spit here by Bush-41. It’s a sample from Bush’s TV address to the American people shortly after the beginning of Operation Desert Storm in 1991, in which he used the words “a New World Order” as shorthand for a post–Cold War world governed by the rule of law, inadvertently providing the black-helicopter crowd with an enduring paranoiac buzz-phrase. Like nearly every major 21st-century pop star from Lady Gaga to Blue Ivy Carter, Kanye has been accused by conspiracy theorists of consorting with the Illuminati, one of history’s most enduring possibly mythical world-events-manipulating secret societies, and of planting subliminal references to the group and its agenda in his songs, his videos, and his pants. Kanye, in turn, has LOL’d about these claims on Twitter and in rhyme (“All this Illuminati talk / Like my first hit single wasn’t ‘Jesus Walks'”).

On one level, the “New World Order” sound bite is just characteristically over-the-top metaphorical stunting on Kanye’s part — it’s a declaration of war on everyone who is not G.O.O.D. Music, flipping Bush’s resolve (“When we are successful — and we will be”) as an expression of Yeezy’s confidence re: Cruel Winter stealing Christmas from the haters, sales-wise. (Of course, Cruel Summer ended up dropping in mid-September, so maybe this one will actually steal Valentine’s Day.) But given what the words “a New World Order” mean to people who believe in the Illuminati, the sample is also the conspiracy-theorist-trolling equivalent of Chris Brown releasing an album of Ike Turner covers. (He isn’t, not yet — but at this point, would you be surprised?)

Chances are Yeezy’s not really a member of a shadowy cabal that has puppeteered world events since the 1770s. But he’s also not an idiot. Asserting your kinship (real or symbolic) with Mafia kingpins and Warren Buffett has become an empty rhetorical commonplace in hip-hop, but there’s still something omnidirectionally transgressive about equating yourself and your crew with the Illuminati, a secretive power structure that has supposedly oppressed nonwhite and non-rich Americans for hundreds of years. The myth of the Illuminati is scary and compelling because it plays into the fear that our freedom is an illusion; with this video, Kanye’s basically saying that his crew is so connected and possesses so much reach that everyone else’s freedom is an illusion. Which is a pretty bold claim to make about any organization that includes Mr. Hudson and CyHi the Prynce, but whatever. Kanye has yet to comment on the status of Cruel Winter and what it may reveal about the precise nature of his affiliation with the Ancient Illuminated Seers of Bavaria; while you wait for that news to break, go check out Sean T. Collins and Andrew White’s Web comic The Hottest Chick in the Game, in which the only man brave enough to stop a pyramid-hatted cabal made up of Jay-Z, Kanye, and Beyoncé from taking over the world is Drake, who has a time machine. It’s a somber, oddly beautiful piece of pop-culture-informed science fiction. Or so the Illuminati would have us believe.