Rembert Explains the ’80s: Christopher Walken in Puss in Boots 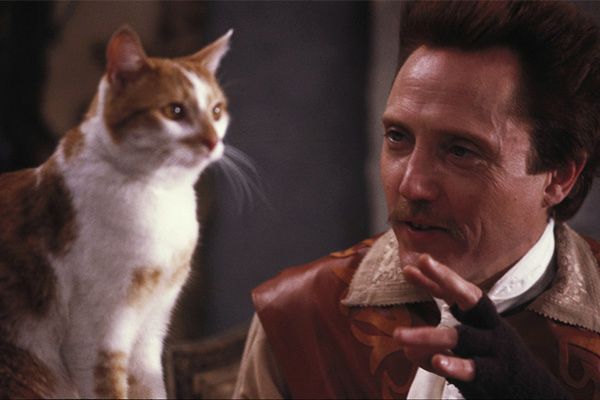 Welcome back to our series Rembert Explains the ’80s. Every so often, we’ll e-mail 25-year-old Rembert Browne a video from the 1980s that he hasn’t seen. Rembert will write down his thoughts as he’s watching the video, then we’ll post those thoughts here. This week’s installment was selected by Grantland reader/hero David P. Levine: Christopher Walken’s Puss in Boots. If you have an idea for a future episode of Rembert Explains the ’80s, e-mail us at hollywood@grantland.com.

0:12 And this is Christopher Walken.

I don’t know what’s going on. Where are they?

1:02 This is the best. Puss in Boots: The Musical. I couldn’t be happier. Please tell me he’s about to start dancing.

1:04 Also, the music in the background is filled with super-whimsy. I am happy.

When he reached out, I completely reached out toward him. I forgot for a second this wasn’t real. I thought I was on Skype. With Christopher Walken.

1:22 Walken and his Master are standing in a pile of hay in a barn.

Why? No clue. But it doesn’t matter, because CW is still singing and this orchestration in the background couldn’t be any more endearing. I need to see this entire film/TV show/miniseries/documentary ASAP.

1:24 Wait, does the CW Network stand for Christopher Walken? That show Arrow would make a lot more sense if it did.

“AND I’VE GOT IT ALLLLLLLL”

Walken’s such a torch singer. This note he hits truly is a throwback to Nicely-Nicely Johnson in Guys and Dolls.

Sorry, I forgot for a second that (1) I was writing about this Walken video, and (2) anyone else was going to read this.

I’m all about Walken matching his ginger hair with his ginger mustache and his ginger garb. I respect this so much. Also, he looks like a sofa.

1:44 Puss-in-Walken: “You’re looking at the cat who ate the cream.” I have no idea what he’s singing about, but it sounds and looks incredible.

1:51 Is the Shrek Puss in Boots character based off of Walken? Until proven otherwise, I’ll be forced to assume so. That’s exciting for me.

2:15 Walken-in-Boots started walking, and then disappeared.

This was one of the most magical things I’ve seen. No clue what was going on, but Walken’s voice and dress and sauntering style and ability to disappear are all second to none. Now, if you’ll excuse me, I’m off to watch Guys and Dolls until the NYC subway system is back up on Valentine’s Day.