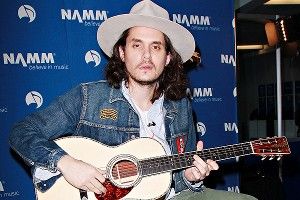 After a three-year live-show hiatus related to his chronic throat issues, John Mayer is headed back to the road. It’ll be a 40-city, four-country tour, kicking off with warm-up shows at Jazz Fest in New Orleans at the end of April, and running through dates in Brazil, L.A. and, of course, Milwaukee. Mayer has been cleared to sing again after doctors resolved his granuloma, which is severe tissue inflammation on the vocal cords. As Billboard reports, Mayer first went to Dr. Steven Zeitels, the doc who saved Adele’s pipes and got a subsequent shout-out at the Grammys (it was actually Mayer who recommended Zeitels to Adele). But Zeitels’s surgery/throat-Botox regimen didn’t solve Mayer’s throat issues, which were complicated by “stress on [his] voice from constant touring and performing, and a longtime struggle with acid-reflux exacerbated by poor diet and drinking.” Tragically, John Mayer’s lifetime of carousing with the world’s most beautiful women had caught up to him.

But there was an answer! Even more throat Botox! UCLA’s Dr. Gerald Berke really loaded John up with the stuff, which meant no talking. “I probably had, contiguously, three, maybe four months of not saying a word,” Mayer says. “The endurance was tough for me, but I started a new life.” Says his manager, Michael McDonald, “John’s just been playing guitar for three years straight. He hasn’t been onstage playing the same thing every night, so as a musician, he’s grown insanely. But during his vocal rest, John had an ongoing frustration without being able to crack the joke in the room — he just couldn’t type fast enough on his iPad. Everyone told him he should go to an ashram, but that’s not John’s style.” And now, finally, he’s healed. “The greatest gift I have in my life is the opportunity to play again, which is also the opportunity to dream again,” Mayer says. “My dreams were in escrow, but when I found out this thing in my throat had receded, the most exciting thing for me was having a second chance at a new life. My dreams have come true twice. That’s really cool.”

You know what? Go ahead and try to make fun of John Mayer. John Mayer’s already doing a better job of it than you ever could.