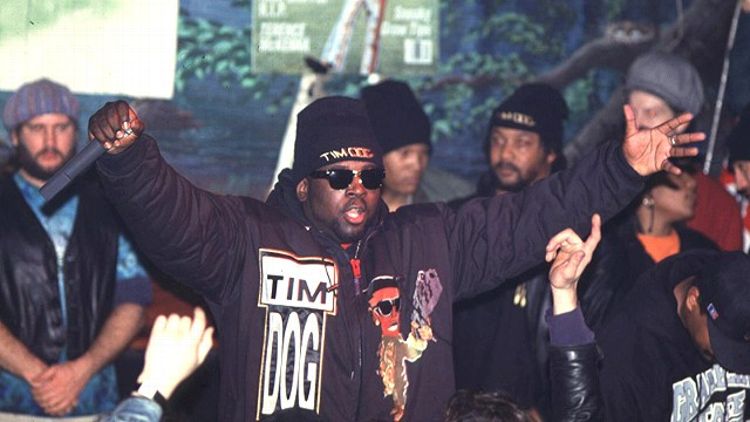 I listen to Penicillin on Wax, a profoundly ignorant, 22-year-old album about how much Bronx rapper Tim Dog hates Compton, more often than is probably suitable for someone with a wife, an actual dog, proper adult responsibilities, and no real feelings of ill will toward N.W.A., Compton, the West Coast, the Raiders, or the Teenage Mutant Ninja Turtles. Penicillin is ignorant in a punishing, old school sort of way, bereft of wit or cleverness or grace or gimmickry. It’s just one severely aggrieved guy from the Bronx on the wrong side of history, as he yells and growls and stumbles over his own rage-filled words. It’s like the hatred grew so intense that it’s tipped over to glee, as Tim calls N.W.A. a bunch of “PUSSIES!” over their own beat, fantasizes about their sexual abuse, schemes to roll into Compton with a hundred Bronx brothers and the Nation of Islam, guffaws about Eazy-E’s “little ass dick,” calls Dr. Dre out for beating up on women, and mocks their Raider gear “when the Giants won the Super Bowl.” And that’s just the album “Intro.”

Tim Dog died yesterday from complications related to diabetes. He was 46. He was not a particularly stand-up guy. According to this 2011 episode of Dateline, he had been spending his time running online dating scams. It was a pretty awful and unfortunate story to hear, but then again hip-hop, as I was reminded this week when news of East Bay deity Saafir’s medical troubles broke, has never been a career path with retirement packages and good benefits. Which isn’t to let Tim Dog off the hook; it’s just one of those reminders of how fleeting invincibility can be, especially when you were only semi-famous. After Penicillin, Tim Dog toured with Kool Keith, cut a few more records — including the wondrously meticulous, line-for-line Snoop diss/parody/tribute track “Bitch With a Perm” — and spent some time in England, where tales from the Bronx will always have an audience. (Here’s a video of him just clownin’ in front of Buckingham Palace.) He was never a great rapper and he really only had one thing to say. Tim Dog’s movement thinned out in the 2000s, though he still had his devotees. A couple years ago, the rapper J-Zone tried to get Penicillin to be the first album ever reissued, one line at a time, on Twitter. My favorite moment was during one of those Funkmaster Flex 1990s sets, when he stopped the music to have a talk with his listenership. “THIS IS REAL HARDCORE, WHEN PEOPLE WERE MAKING RECORDS CAUSE THEY WAS JUST HYPED,” one of the heirs to Tim’s all-caps style barked before dropping “Fuck Compton.” “THIS WAS AN EARLY DISRESPECTFUL RECORD.”

Penicillin on Wax was released in 1991, the somewhat forgotten opening salvo in what would eventually take shape as the East Coast vs. West Coast rap rivalry. It’s lead single was “Fuck Compton” (edited version: “Forget Compton”). There was one skit where he and his crew run up on DJ Quik and slap the shit out of him until he starts crying, and another where he smooth-talks Dre protege Michel’le and somewhat disingenuously pledges to defend her from his abusive ways. There’s a skit where a newscaster just reports on that afternoon’s Giants victory, and more offense taken at the West Coast’s style of dress (“Wearin that fuckin’ Raider hat/Giants won the Super Bowl, TAKE THAT SHIT BACK”). The thoroughness of his anti–West Coastness is amazingly over-the-top, weirdly rationalized (ignorant rapper attacks rival rapper for being even more ignorant), locker room hilarious.

In a way, Penicillin — a protest against industry trend-hopping or just one man’s insanely brute furies, depending on how you look at it — was pretty visionary. Tim Dog was just mad about N.W.A.; The Chronic, Snoop and the G-Funk tidal wave were still a couple years away, to say nothing of Eminem (who reverently name-checked Tim Dog) or headphones. It’s a document of how low stakes rap’s civil wars seem in retrospect, the clear line between Tim’s boot-stomp hardcore and the sellouts, the rappers “who put dye in their hair” and/or wore polka dots, all those “HAPPY RAPPERS.” It’s nice to think it once seemed so simple. I no longer mind happy rappers, and I was never particularly bothered by blowy shirts and polka dots. But I remain steadfast in agreement with one of Tim’s great gripes on “I Ain’t Havin’ It”: “Rap is not something to be put in movies with a bunch of fucking turtles.”

Video on Demand Report: Bonds Away