I Would Reunite 4 U: Prince’s Private Paisley Park Concert for Apollonia 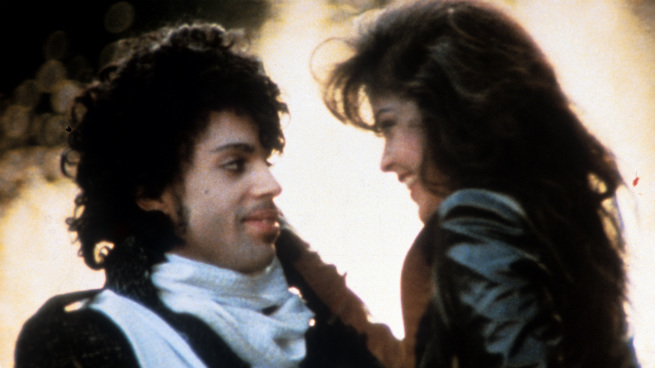 Eye want 2 tell U a story. Once upon a time in the land of Sinaplenty, there lived a Prince named Prince, who was always looking 4 his princess. Then he met a beautiful girl named Patricia Apollonia Kotero and cast her as the lead in his 1984 movie, Purple Rain. He dubbed her simply “Apollonia,” and after the departure of  Denise “Vanity” Matthews, he assigned the remaining members of Vanity 6 (Susan Moonsie and Brenda Bennett) to be Apollonia’s backup singers in a new group called Apollonia 6.

Despite their intense connection on the silver screen in Purple Rain, Prince and Apollonia never had a romantic relationship in real life. Kotero was married, but her relationship status was kept a secret in order to better sell her image as a vixen. In addition to rumors about her relationship with Prince, the tabloids also linked Apollonia to Lorenzo Lamas and David Lee Roth. Prince had intended to  give Apollonia 6 songs including “Manic Monday,” “Take Me With U,” and “The Glamorous Life” but soon realized that Apollonia was not a very good technical singer. She also hadn’t planned on being a Prince girl for all that long, and she did not intend to stay with Apollonia 6 after her contractual obligations to make an album and do Purple Rain were completed. Prince wrote all the songs on the group’s lone album but credited them to the group’s members, attributing the lead single, “Sex Shooter,” to Kotero herself.

But this was all long ago. Many years (30) have passed since Prince convinced Apollonia to purify herself in the waters of Lake Minnetonka. But some of us have held a torch for Prince and Apollonia all of these years. The hot, purple chemistry they had in Purple Rain was just 2 iconic. And for those some of us, on Saturday night, our dreams came true. Prince took Apollonia home 2 his kingdom of Paisley Park in Minnesota for the first time.

Paisley Park Studios, named after a song on 1985’s Around the World in a Day and Prince’s (now defunct) Paisley Park Records label, is a mysterious, magical $10 million complex that only a select few get to enter, and only by invitation from Prince. Essentially it is the Willy Wonka’s chocolate factory of funk. What is known about Paisley Park is that it has a Granite Room and a Wood Room that provide different acoustics for recording, and a complete soundstage that Prince used to shoot much of Purple Rain follow-up Graffiti Bridge. Prince still rehearses all of his tours on the Paisley Park soundstage, and its also been used as a practice space by the Beastie Boys, the Bee Gees, Neil Young, Kool & The Gang, and the Muppets. Paisley Park also contains “The Vault,” where Prince stores everything he has ever made, including B-sides, outtakes, and jam sessions he deemed 2 b 2 funky 4 human ears.

At Paisley Park this weekend, Prince played a private concert 4 Apollonia with his band 3rdEyeGirl. The eight-song set began at 3 a.m. as Prince ran through songs like “She’s Always in My Hair” and “Endorphinmachine.” Apollonia put up and then took down a Facebook post about the blessed event, which read:

4:42 A.M. in Minneapolis , just had a private concert by Prince and 3rdEyeGirl at Paisley Park….Ida on Bass , Donna on Guitar and Hannah on Drums. They play loud and HARD. Heard new music that was dope! He had a cool chair for me on the stage at his side and I sat there transfixed on every note, every move, every vocal. After every song I yelled and clapped my ass off. It was so amazing it made me sweat. These ladies are so talented and beautiful. I was charmed. And Prince….my heart still skip’s a beat. Paisley Park is a fun place. He showed me all my images painted on the walls. ‘Hey thats me!!’ I said, he just laughed in that cool way he that does. The biggest room will be The Purple Rain room….he will have us painted there, huge murals. ‘My big head gonna be up there?’ He just laughed and laughed.”

Prince posted a YouTube clip from the show called the “PRIVATE ‘INFRARED’ SHOWCASE 4 APOLLONIA,” in which he shreds 4 all of our lives. Who knows if Apollonia and Prince will ever be together, but it’s nice 2 know they are at least still friendly 30 years after their iconic screen romance, and there will always b a place 4 her on the back of Prince’s bike.

Box Office by the Numbers: 'Transformers: Age of Extinction' Is the Year's New Biggest Movie