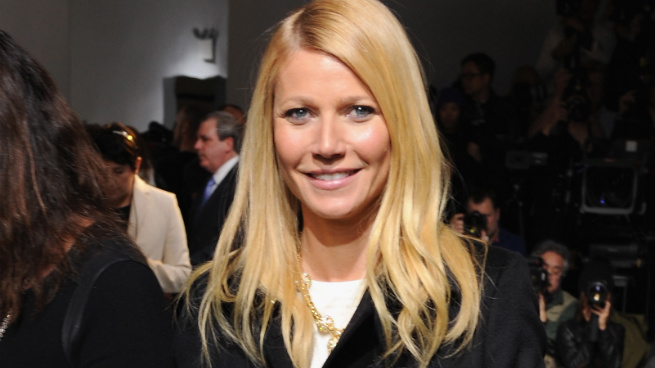 Now that her separation from Chris Martin is out in the open, what will Gwyneth Paltrow do next? Will she hide out from the press in her Brentwood garden, baking pizzas in her wood-burning pizza oven? Will she jump back into the dating scene to make her way through hot DJs, net artists, ’90s male models, and maybe a Hemsworth brother or two before ending up with an older European billionaire? Will she finally put out that mixtape the streets have been thirsting for? We’re hoping she puts the whole lifestyle blogging empire on the shelf for a minute and gets back into acting in a serious way. Now is Paltrow’s chance to prove her enormous early success wasn’t a fluke or the result of nepotism, but a product of God-given talent. Moreover, as she rededicates herself to her non-crafting-based craft, she can go further than she ever has before. She was always great playing sunny upper-class yuppie babes (Emma, The Talented Mr. Ripley, The Anniversary Party), sad upper-class yuppie babes (Se7en, The Royal Tenenbaums, Great Expectations), and Pepper Potts.

I am not a Paltrow hater. I have seen Sliding Doors at least 50 times. I just want to see her capitalize on the potential she has always had, to take advantage of her natural talent by really challenging herself. She has always been a lovely willowy birch tree, but it’s time to turn that tree into a rustic hand-hewn bench for the sun porch. Paltrow’s next film project on IMDb is the Johnny Depp stolen art quest movie Mortdecai, in which Paltrow’s credit is listed underneath Olivia Munn’s. The film world is your Kumamoto oyster, Gwyneth. Let’s pry it open together.

What Goop really needs to do is team up with SoCo (that’s Sofia Coppola, for you plebes) for a movie about a divorce. Maybe a modern West Coast remake of Paul Mazursky’s An Unmarried Woman, set in upper-crust Santa Monica instead of the Upper East Side? Or an Edith Wharton–type story about a disgraced woman who is cast out of Malibu high society after a high-profile divorce? No, we must get out of Los Angeles. It’s all too bleak right now to stay in Brentwood. A road movie, then, about a woman in her early forties named simply “G” embarking on a journey of personal discovery inspired by Antonioni films and No Wave, soundtracked by a synth-pop band of beautiful French triplets whose music sounds like Angelo Badalamenti’s? She wouldn’t just go to one or two inspirational places like stupid ol’ Italy. She’d try to lose her bad mood everywhere. In Morocco, Greece, Spain, Croatia, India, the Maldives, etc. Anywhere but bloody cursed England. But no matter how many gorgeous places she goes or souvenirs she purchases or cigarettes she smokes while looking out of windows and from balcony vistas in beautiful places wearing high-thread-count robes, nothing can stem the ennui that has taken deep root in her soul. Every teardrop is a grain of quinoa. Will she find love with the sensual businessman (Tony Leung) she meets at a bar during her sojourn to Hong Kong? Or the rakish electronic composer (Michael Fassbender) from Berlin who may also be married himself? Or will neither man be able to break down the fabric of emotionlessness “G” has draped herself in like a classic Rei Kawakubo garment since her divorce was announced? Spoiler: The film ends with a solitary “G” walking into the Arctic Ocean to die, clutching an unexplained notebook.

Writer/director Nicole Holofcener specializes in complex portrayals of prickly heroines who often live in expensive zip codes. She’s also great at getting high-water mark performances out of actresses like Catherine Keener, Jennifer Aniston, and Julia Louis-Dreyfus. Gwyneth’s brittle funny edge has been under-explored on film, although it’s been on full display recently in interviews. Holofcener could tease out the frayed edges that Gwyneth usually keeps under wraps: the bitten cuticles, the frizz in her hair, the cigarettes that get stubbed out when the kids walk in.

Everyone knows TV is where all the action is right now. I’m not talking about Glee, but if Gwyneth wants to keep working with Ryan Murphy and Brad Falchuk she should absolutely be transferred over to American Horror Story. AHS loves blonde divas, and the show has provided great roles for actors like Connie Britton, Jessica Lange, and Sarah Paulson. Murphy has worshiped Gwyneth since his Popular days, and Paltrow on AHS might actually be ideal as departing queen Jessica Lange prepares to step down. Or what about Gwyneth on True Detective, as a former Texas beauty queen turnt police lieutenant with a secret meth problem who uncovers a link between a recent string of random poisonings and a group of powerful Texas Rangers? Or she could always join House of Cards in Season 3 as Claire Underwood’s icy blonde sister. Gwyneth would make a fantastic villain, and particularly a flawed one who has several weeks or seasons over which to develop.

The ultimate gantlet for any female actor who wants to prove her chops (and stamina). Just like Kirsten Dunst in Melancholia or Charlotte Gainsbourg in Antichrist, Gwyneth could twist her status as a fashion icon and aspirational It Girl inside out, exposing the weird milky thorns nestled inside. How about a movie like von Trier’s latest double opus Nymphomaniac, but instead of suffering from sexual compulsion the Unnamed Female Protagonist (Gwyneth Paltrow) develops a compulsion for lifestyle blogging. Pin-o-maniac tells the story of a woman who becomes obsessed with taking the perfect Instagram photo of her roasted cauliflower sprinkled with sel gris and fennel fronds and posting it on her Pinterest board. Meanwhile a construction worker (Shia LaBeouf) is trying to dig a new pool in her backyard, but uncovers a cache of Neanderthal skeletons buried in the ground. Both characters are eventually reduced to complete madness, at which point they crawl into the Neanderthal grave and fuck.

Gwyneth has directed one short, in 2005, called Dealbreaker. She constantly demonstrates her insane attention to detail, which is a perfect quality for a director! Paltrow once owned the rights to Donna Tartt’s The Secret History, and it’s not like she can’t afford to buy them again (although Tartt may not want to sell them). Once upon a time, she could have played bitch goddess Camilla, which would have been perfect, but she might not pass as a college student at this point. That’s why she should rewrite the role of influential classics professor Julian Morrow for herself; age it down and change it to “Julia Morrow” or something. Can’t you see Gwyneth as an imperious academic exercising trance-like control over a group of influential coeds? Whether she chooses to star in a vehicle or not, she should still give directing a shot. Like I said, that attention to detail has got to help. And if she needs any help, she can always call her godfather, Steven Spielberg, to troubleshoot dailies. C’mon Gwyneth, why not give it a shot? You’re already the Stanley Kubrick of art-directed kitchens.