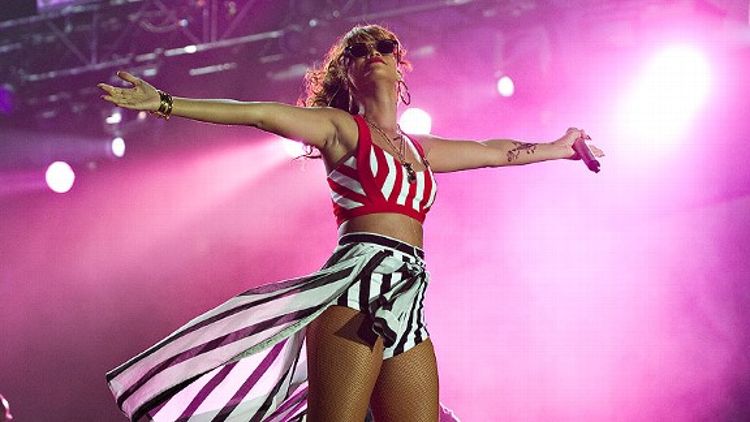 Rihanna’s new album Talk That Talk came out last week and we can all rest assured that its tracks will eventually become ubiquitous and make us fight the urge to dance in a lamestream club and/or Honda Civic. Then they’ll aggravate us because we won’t be able to escape them. Then we’ll suddenly know all the words and wonder how these songs became so familiar without ever really engaging us. That’s probably just ‘the power of pop music,’ but I sometimes wonder how Rihanna managed to stay relevant with such a dull discography.

The first time I hear any Rihanna song I am perplexed, because it usually isn’t directly accessible. Sometimes it is too anthemic for Rihanna’s simple, range-limited voice, or the original sample is poorly constructed into a new song. How can Rihanna be so successful without one overwhelmingly amazing trait as a singer or performer? She has done little to distinguish herself as an independent female artist with an unique perspective that she genuinely wants to share with the world. She’s not as thematically deliberate as Taylor Swift, but also not as comatose as Britney Spears. How did she go from just capitalizing off the island-beat-goes-mainstream movement to being a full-on pop force (instead of just fading away like Shaggy)?

Here are a few theories.

She’s a hook singer.
Rihanna is one of the most successful ‘hook singers’ of all time. Perhaps it’s the era we live in, in which the genres of dance, rap, and pop have all merged to form an ultimate song featuring Rihanna featuring Usher featuring David Guetta featuring Will.i.am featuring Pitbull featuring a random hook singer imported from Europe. Even Coldplay’s “Princess of China” has a Rihanna-sung hook, which could either be a testament to her ‘range of appeal’ or just indicative of the inescapable formula for modern pop. While most artists in a similar position would be accused of ‘spreading themselves too thin’ across so many collaborations, Rihanna is ‘lite’ enough that the dosage feels appropriate.

She’s not Beyoncé.
Rihanna’s closest similar competitor is Beyoncé. As iconic as Beyoncé is, it seems way easier to be Rihanna. To put it in terms of generic assumptions about gender roles, I think most bros would rather date a girl who ‘shuts up and dances’ to Rihanna than one who wants her boyfriend to wholeheartedly appreciate Beyoncé while he rides passenger in her Jetta. The people who write about pop music really want you to appreciate certain artists for ‘the right reasons,’ but it is usually just easier to be a Middle American who wants to jam out to songs for simple reasons.

I am always surprised when Beyoncé gets praised for her contributions to music. From my perspective, Beyoncé is just about as robotic and uncompelling as Britney Spears’ lobotomized-but-programmed-to-perform-since-childhood brand. But because of Beyoncé’s affiliation with Jay-Z, she has somehow been able to cultivate an ‘authentic brand’ in a way that actually dehumanizes her. There have always been signs of Beyoncé’s career-driven-yet-disconnected nature, but it went over the top when she used her pregnancy announcement as an attempt to create a definitive cultural moment. Rihanna can just be a singer who splatters her vocals on catchy songs and never asks us to take her too seriously.

She’s not over-endorsed by Jay-Z.
While Jay-Z has vigilantly endorsed Rihanna’s career from the beginning, his influence hasn’t created the same corporate awareness that makes most of his protégés unidentifiable. There’s something about ‘being endorsed by Hov’ that automatically gives you added credibility as an artist but also turns you into a wannabe mogul. Even if you are great at your craft, your craft turns into trying to become a billionaire. Sometimes it is difficult to find redeeming qualities in Beyoncé, Kanye West, and LeBron James, who are all students of Jay-Z. Jay-Z’s relationship to Rihanna seems like that of a ‘big brother,’ not a business mentor giving solid advice.

Rihanna is always promoting something for the sake of promoting herself.
She’s released an album a year for the past three years, which might seem prolific compared to other artists. However, I’m not sure if her ‘selling a crapload of songs on iTunes’ amounts to a legacy or just a hard-fought battle to keep the world from forgetting she existed. If you have millions of Facebook fans and Twitter followers, can you ever allow yourself to become unfamous? Unless you’re going to pretend to have a baby, there’s probably never a reason to take an extended break between album and promotional cycles.

Some female pop artists at least try to sell some sort of ‘angle’ as the inspiration for every new album. Commonly accepted angles are ‘celebration of new-found love’, a recent breakup that led to personal independence, and sometimes sexual independence, but Rihanna’s work is mostly just about her commitment to staying popular with agreeable dance-floor jams. She’s the last artist we’d expect to write a ‘concept album.’ Talk That Talk provides nothing revelatory or innovative, but those aren’t things we expect from Rihanna.