Hey, the MTV Movie Awards Were on Last Night 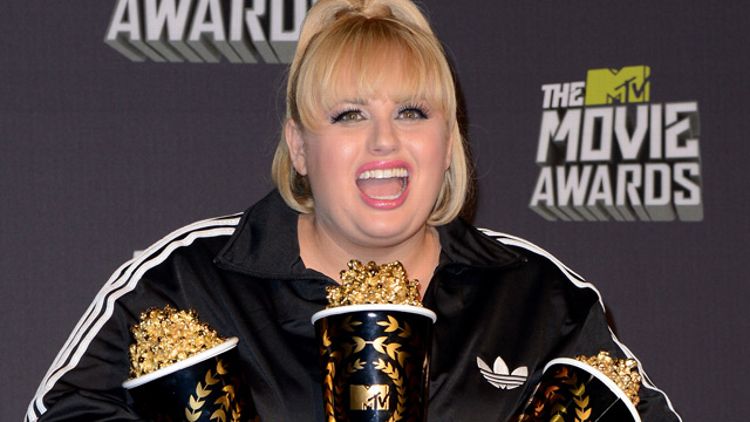 There’s this one episode of Married With Children where Al Bundy fills his attractive ditz daughter’s brain with all of his worldly information so she can compete on a local sports trivia show in his stead. Everything goes great until the final question: Who rushed for four touchdowns for the Polk High School Panthers in the 1966 championship game? The answer, of course, is Al Bundy — but Kelly only has a finite amount of information she can fit into her brain, and the answer, devastatingly, eludes her. The moral of this very important story is that, if we only have a finite amount of pop culture information we can squeeze into our brains, knowing who won what at the MTV Movie Awards is one thing we’re probably safe skipping. That said: The MTV Movie Awards were last night, and some stuff happened.

Host Rebel Wilson and the cast of best movie ever Pitch Perfect opened the show. And the question on everyone’s minds: Seriously, what the hell was Anna Kendrick doing that was more important than this?

Peter Dinklage awarded Will Ferrell with the Comedic Genius Award, then Aubrey Plaza tried to snatch it away, and then Ferrell brought on his fake Asian wife and children to ply with gratitude. Yo, Andrew Ti: Was that racist?

Jamie Foxx wore a Trayvon Martin shirt, and explained it by calling it “just a little blip just to keep our minds — not political or anything like that — just think about the children. My daughter’s here, 19 years old, so just protecting our kids that’s all.” Aaaand you’re just thinking about the fact that Jamie Foxx has a 19-year-old daughter, aren’t you?

I’m pretty sure this chastity belt bit was Danny McBride paying silent tribute to the unloved — by everyone but me — Your Highness.

And most importantly, the Hunger Games: Catching Fire trailer premiered.

Now if you need me, I’ll be stoically holding up three fingers in the direction of Katniss Everdeen.