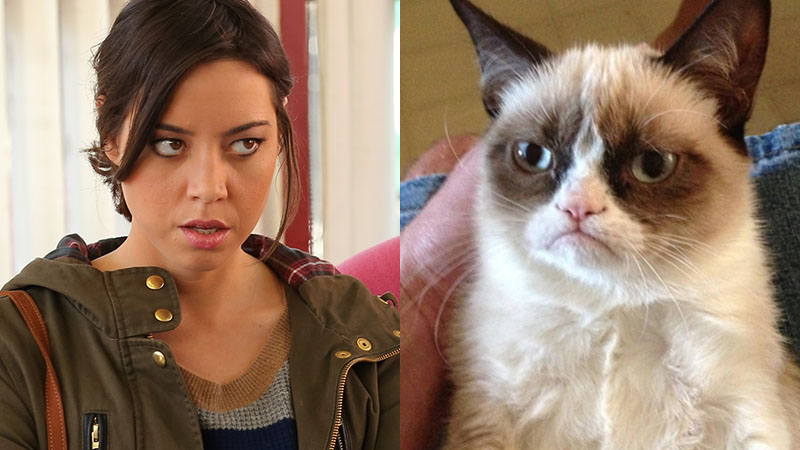 Barring Rob Lowe, Lifetime generally isn’t a place successful stars go to shine. Neither are voice-over roles (although they’re quick, good money, so everybody does ’em). Now Aubrey Plaza’s about to throw that all in the trash with Lifetime’s Grumpy Cat’s Worst Christmas Ever, where she, one of our greatest Do I Look Like I Care? actresses, will give voice to the Internet’s surliest cat. (Actual name: Tardar Sauce. Actual deal with the face: She suffers from feline dwarfism and a wicked underbite.) For a quick, vital refresher, this is the TV event being described as “a little Home Alone and a little Die Hard.”

Plaza as Grumpy seems almost too on the nose, but hear me out: It’s brilliant. When Parks and Recreation kicked off in 2009, it looked like Plaza could eye roll and mumble her way through an entire career with no trouble. But as the show steadily softened and broadened the acidic April Ludgate, Plaza mirrored the move in her other work. In films like Safety Not Guaranteed, The To Do List, and this summer’s About Alex, Plaza has steeped herself in smiles and giggles and pleasantries without entirely abandoning her beleaguered persona.1 Smart move, and she’s remained just as wonderful to watch.

Grumpy Cat is a coup, though. Plaza’s going to give us peak Plaza, without showing her face, while everyone knows it’s her. She’s also giving us a real reason to tune in, boosting Grumpy Cat’s Worst Christmas Ever’s profile from regular Lifetime levels up into the Sharknadosphere. If everything goes as well as it could and should, Plaza might even be enough to get Grumpy Cat back in the big-screen adaptation conversation. (Pre-Lifetime, Grumpy was the subject of a short-lived, Garfield-ish film.) Anything is possible, especially when it comes to famous cats.

Q&A: Haley Joel Osment on the Deranged ‘Tusk,’ the Still Super-Top-Secret ‘Entourage’ Movie, and Being Mistaken for Jodie Foster in Dubai