It’s Like ‘Die Hard’ Meets ‘Home Alone,’ But It Stars Grumpy Cat and It’s on Lifetime 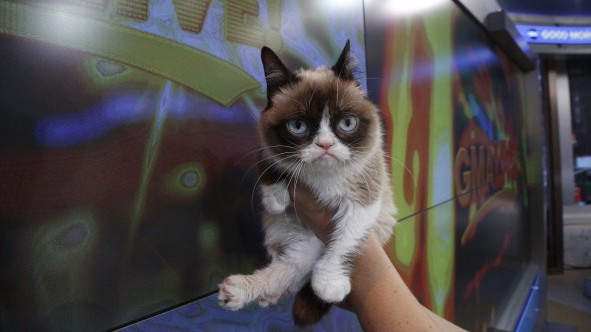 Grumpy Cat, the award-winning Internet pet who suffers feline dwarfism and a permanently unamused facial expression (insofar as cats deploy facial expressions), is getting a Lifetime movie. Also, she is a girl. Named Tardar Sauce. The film will be a live-action project called Grumpy Cat’s Worst Christmas Ever, with a script cowritten by Tim Hill of Rocko’s Modern Life and SpongeBob SquarePants. Grumpy/Tardar will play “a pet-store cat that is perpetually overlooked and the 12-year-old girl who can communicate with her.”

The catsploitation of Grumpy is nothing new (her manager — yes — does say she seems to enjoy the attention she gets while traveling and, um, working), but Lifetime seems like a bogus destination. Even Lifetime’s VP of original movies acknowledges the movie is unusual for the network. “It brings fun and irreverence that we haven’t had at Lifetime,” says Arturo Interian. “We’re so known for our heartfelt sentimentality that it will poke fun at those stereotypes.” Also: He describes it as “a little Home Alone and a little Die Hard,” and says other famous memes will appear.

But still: Lifetime? Home of Stolen From the Womb, A Daughter’s Nightmare, The Nightmare Nanny, and the upcoming Outlaw Prophet: Warren Jeffs, starring Scandal‘s Tony Goldwyn? Grumpy Cat has a registered trademark, a lively website, a Tumblr page and Twitter feed, and a Facebook account with almost 6 million likes. She’s covered New York magazine and appeared on American Idol and the MTV Movie Awards. She beat Nick Offerman for Outstanding Literary Achievement at the Spike Guys’ Choice Awards, which airs tonight. (Yes, she’s got a book.)

So why isn’t Grumpy Cat getting the full cinematic shebang? Well, there was already a deal for that, with Broken Road Productions, a company behind Here Comes the Boom and Jack and Jill. The Hollywood Reporter says the production was “short-lived.” News about the deal broke in May 2013, with Deadline’s report saying the film would be Garfield-esque and give Grumpy the ability to speak. Oh, if only. Guess we’ll see you on channel whatever, though, little kitty.

The ‘If I Play This R&B Singer’s Music, Will He Help Me Have Sex?’ Chart