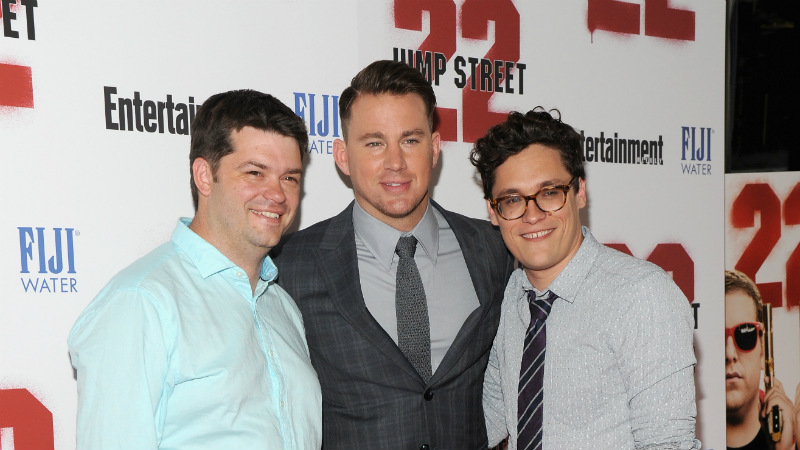 Phil Lord and Chris Miller. So hot right now. The directing duo has been churning out good work for more than a decade — the last time we spoke, it was to gush over their dearly departed cult cartoon Clone High — but have broken into a new stratosphere with the sweeping international success (nearly half a billion in box office) and total cultural permeation (EVERYTHING IS AWESOME) of The Lego Movie. We shouldn’t have been too surprised, though: The dudes had a track record of taking over pop-culture entities being adapted for the big screen — with fans wary about the outcome — and having them end up better than anyone would have guessed. Two years ago, 21 Jump Street, their first-ever live-action directing gig, turned out to be the kind of properly punched-up comedy we so rarely get these days. The sweet bond of its two star-crossed partner-lovers, and its breezy meta-formulaicness, begged for a sequel. And this Friday, thank the heavens, Schmidt and Jenko ride again. Ahead of the release of 22 Jump Street, we spoke with Phil and Chris.

First, I gotta ask you — off our last interview, did we get any traction going for the Clone High revival?!

Lord: Yeah, that’s a meme that’s out there.

Miller: It definitely got the idea floating out there a lot more. We and [cocreator] Bill Lawrence, we talk about it all the time.

Lord: And now what we need from you now is a business plan [laughs].

Wait, sorry, guys, can I just ask you to say who’s who — I just wanna make sure I’m quoting right.

Miller: This is Chris.

Lord: And this is Phil.

Miller: I can talk like a robot. That’s how you’ll know.

Lord: That would be an interesting way to know.

With 22 Jump Street, you guys kind of happily, knowingly repeat yourself, which really does feel like the right move. But were there any conversations early on about doing something really far out there? Something that wouldn’t at all resemble the first movie?

Click here for all of our interviews with fascinating people from the worlds of sports and pop culture.
Lord: We did have plotlines kicking around that were vastly different, and that we were trying to make work, and they just didn’t work, for one reason or another. There were all these forces moving us toward things that were similar — we kept saying, “We don’t wanna do the same thing we did last time, we wanna do something different,” and that’s when we realized that’s what the movie should be. These guys [Jenko and Schmidt] wanna be fresh and keep it interesting in their relationship, but the forces are pushing to keep it the same. So the idea was that the movie should start out being as close to the same thing as possible, and then get more and more different as we went along.

Of the outlandish stuff you threw out there early on, is there anything specific that you could remember?

Miller: There were a lot of narcosubs. [Pause.] And there was some stuff with 3-D printers. Crazy 3-D printing story line.

One of the moments that everyone’s presumably waiting to see you do again is the drug trip from the first movie.

Lord: We were never gonna do one that was better. You know? So we didn’t feel an obligation to do one at all. The original draft didn’t have one in it. Then we thought, Well, we could do one that was more or less, you know, centered in reality, and that was what we went for.

Miller: It’s more about their relationship this time.

Lord: We tried to make it more meaningful.

Lord: We … don’t do subtlety. Also, it makes drugs seem like a bad idea. But based on our representation of what a drug trip is, I think it’s clear we haven’t really done drugs [laughs].

At one point the movie goes to spring break, and you have Diplo DJ’ing. How’d you land on him to represent the EDM-loving youth of America?

Miller: A guy that we work with, Will Allegra, who’s a producer on this, he’s a big electronic dance music fan. And [Diplo] was someone that he was really excited about.

Lord: We tease him mercilessly about his love of this music. It seems only fair to credit him now.

Miller: And the crowd was pumped up. When we wrapped on that big day, Channing got up and grabbed the microphone, Jamie Foxx–style, and basically …

Lord: Channing was twerking and Diplo was spinning hits, and the 800 extras in bikinis were having a crazy party. I would definitely shoot a movie that would take place entirely on a beach.

Miller: A DJ who’s a spy and who parties and has fun and and sits on the beach?

Jonah Hill cowrote the first screenplay, but not the second one. Was the collaborative experience similar, though?

Lord: We tweak a lot on set. The writing process on this one, it was very fluid. We were all sitting in a room, riffing on stuff, and then one of our great screenwriters [Michael Bacall, Oren Uziel, and Rodney Rothman] would go off and try to write something inspired by that.

Miller: In the very early stages, it was us and Jonah with one of the screenwriters, sitting around and giving ideas about college and relationships and trying to find something interesting there.

You guys also went to a frat party as research. How did that happen?

Miller: We went back to Dartmouth, where we went to college, and hung out with the fraternity that I was in. And it was pretty much exactly the same! And then through, I think, our agent, we got a hookup to go hang out with a fraternity at UCLA for a night and just get to know them, and we found they were basically the same as my fraternity. It hasn’t changed! And it was very different from our experience going back to high school [for 21 Jump Street]. The whole first movie, the conceit was based on going and visiting Santa Monica High School and noticing that the social paradigm had really shifted — it wasn’t a popular hierarchy based on athletics anymore, it was a lot more of a level playing field. And we thought that was really interesting. And then, as we were going to these colleges, we thought, What new observations will we make? And it turns out, there’s nothing new about it!

Oh, OK. I’ll just go ahead and ask, then. Everything is going so well for you guys right now. Do you worry it’ll all fall apart?

Lord: [Laughs.] I worry it’s gonna fall apart every minute of every day! But we try not to care. You can’t play not to lose. You kind of have to put your ego aside and accept the fact that careers are long, and there’s gonna be stuff people like and stuff that people don’t like, and you try to get better every time, and always put something out that you’re proud of. And let the chips fall where they may. And weirdly enough, we’re learning that from Ice Cube.

Lord: And it’s not even about that he’s got swagger. He’s egoless.

It's Like 'Die Hard' Meets 'Home Alone,' But It Stars Grumpy Cat and It's on Lifetime