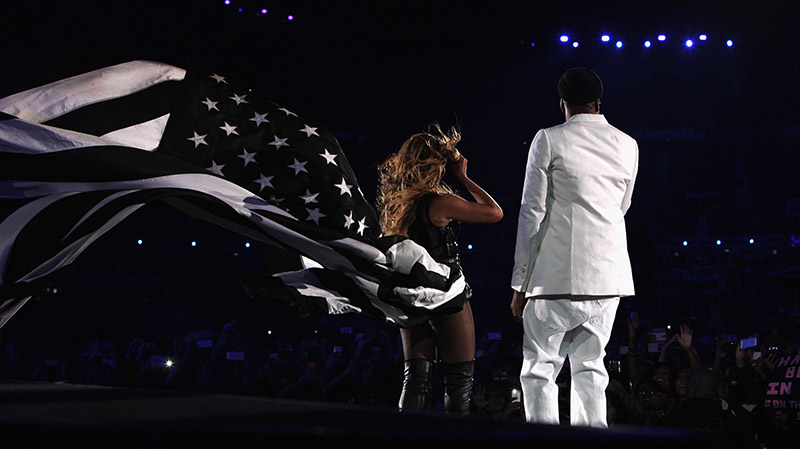 Who knew that a televised Beyoncé and Jay Z concert, no matter how “significant” on paper, would be something so eminently Must-See, especially one that comes at the end of a three-month, 21-date tour that so many people already saw and read about on the Internet?

Aside from FXX’s #everysimpsonsever marathon and the occasional award show, the non–Game of Thrones, non-#sports moments when everyone’s tuned to the same dial are few and far between. But if you’re already “into that,” the Jay Z and Beyoncé super-tour was going to be event TV no matter what.1

Our next-door neighbor, who my wife and I are very much still just getting to know, came over at 9 p.m. with a bottle of wine and joined us to watch On the Run. It felt like we were huddling around the moon landing or something — which may sound dramatic, but was also seriously how it felt. Any broadcast that so immediately reminds you of the marvels and joys of pop and rap music, in such an efficient, explosive fashion,2 absolutely qualifies as Event TV. On the Run was a success. That’s a fact, not a fanboy freaking. You can very, very easily be not “into it” and you most likely still had/will have a good time with On the Run. It’s entertainment.

The Will Ferrell sample and the screwed “ball so hard motherfuckers wanna fine me” intro of “N​-​-​-​-s in Paris” has a Pavlovian effect on Kanye fans, Jay fans, and rap fans. Jay performs “Paris” in Paris, twice, ’cause, in his gleeful words, it’s “TOO GOOD!” He’s right. (Also he orders up a slew of mosh pits for the second run-through. That shit cray.)

The aforementioned “IT’S TOO GOOD!” is only one. “WE DID IT!,” is another, as is, “OH SHE BAD FOR REAL!,” as is, “YOU CRAZY FOR THIS ONE PARIS!” Shawn Carter is now the adorable, almost-too-excitable-to-believe rap-dad. He is Kevin Garnetting arenas the world over, bringing a Matt Foley–level motivational speaker shtick and basically just hollering trite phrases that you somehow can’t not get pumped up about despite your better judgment.

Jay Gave a Lot of Shine to Lord Yeezus

Jay plays “Paris” by himself, which almost feels like a slight, taking the biggest hit from the joint album that Kanye was kind enough to ask him to rap on. But then Jay raps Kanye’s verse. It’s that blah “’YE CAN WE GET MARRIED AT THE MALLLLLL” bit, but that part is also weirdly iconic, and Jay knows it.

Seven years ago, Kanye rapped about not being invited to perform at his big brother Jay’s show at Madison Square. And here, in the 75,000-person sold-out Stade de France, Kanye was being invited over and over to perform in spirit. The holy ghost of Yeezus is so in the house on On the Run. Jay, almost right off the bat, less than 10 minutes in, does Kanye’s “Diamonds From Sierra Leone (Remix),” the one where Hov got off his landmark line, “I’m not a businessman / I’m a business, man.” There are no fewer than half a dozen Kanye West songs or Kanye West samples. Here’s one, for example:

“’03 Bonnie & Clyde,” Jay and Bey’s first collaboration, is and was and always will be a Kanye West production. For a Yeezy fan, On the Run is huge. For a “Paris” fan also. And for a Jay Z fan, it’s interesting — he’s bigging up Kanye the way he bigs up Biggie.

That came up on the stage’s screen, each letter big as a house, 12,000-point Beyoncé Font. Nicki Minaj suddenly got Madonna’d, Cher’d, Aretha’d, and/or, um, Beyoncé’d: 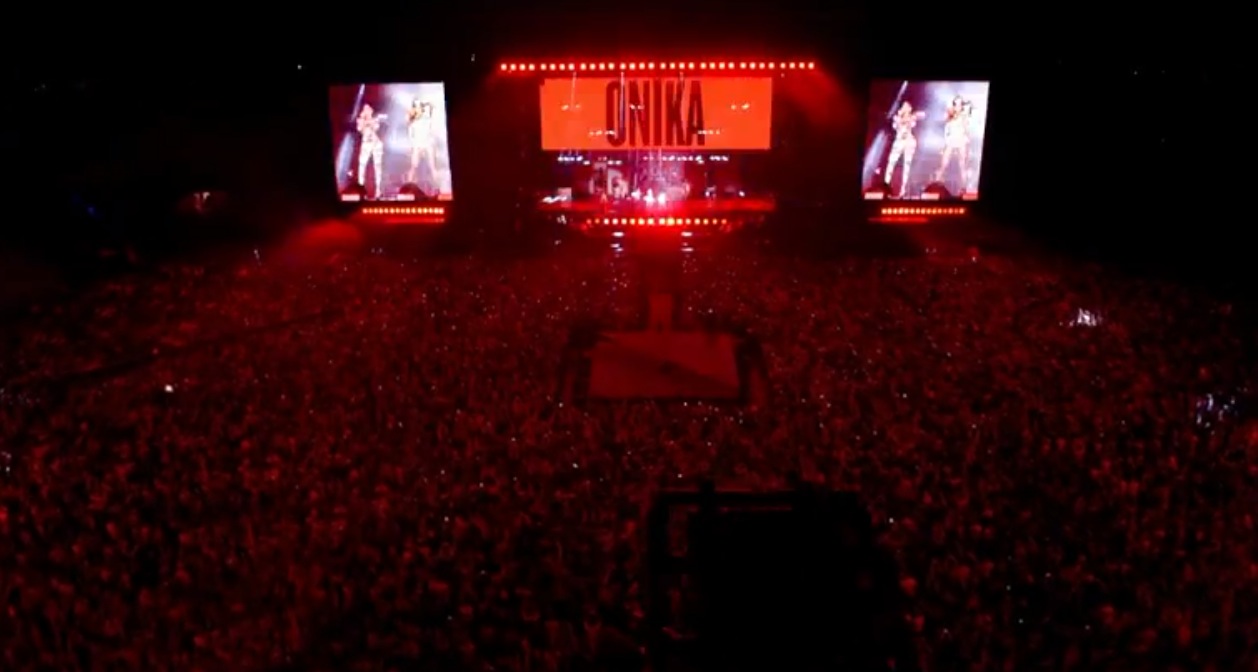 Then she earned it, in verse:

This every hood n​-​-​-​-a dream, fantasizing about Nicki and Bey
Curvalicious, pussy served delicious
Mayday, mayday, earth to bitches
Slap these hoes on they ass like we birthing bitches, uh
The queen of rap, slayin’ with Queen Bey
If you ain’t on the team, you playin’ for team D
’Cause we A-listers, we paid sisters
This watch right here done phased blizzards
I confess, I woke up like this
All this drank in my cup like this
All this ass on that flawless dick
Instagram, another flawless pic
Flawless city with these flawless titties

I’ll stop there, because if I add any more then Onika will steal this article from me the way she stole “Monster” from Jay and Ye and Rozay simultaneously in 2010. Jay had his chance to appear on a big track with the female Hov, and he just kinda went, “LOOOVE / I don’t get enough of it” and showed himself out of the room quietly. Nicki proceeded to shred that track and make her gigantic rap career even more gigantic in 80 staggering seconds.

Nicki’s “next ‘Monster’ moment” has been sort of a rap unicorn these past few years. The live-in-Paris-for-all-the-people-ever version of the “Flawless” remix could very conceivably be it, though. Nicki often raps live along with backing tracks and it undercuts her talents and charms severely. She came to Paris, to Queen Bey, without a tape, verbal dexterity and rapping-ass ass-rapping on brutal, brilliant display.

Exclamation Master Jay said it best — “OH WE GOT A MILLION OF THESE.” You couldn’t come up with a bad Bey Z set list — just shuffling their albums is a victory every time — but they really slaughter the sequencing game. It’s impeccable. The Motown homage “Love on Top” segues into the Jackson 5’s “I Want You Back,” then slips into “Izzo (H.O.V.A.),” the one that samples “I Want You Back.” It’s like that all night, just genius flow. Hit after hit after jam after slam dunk after grand slam. They give the people/us what they/we want and then what they/we weren’t even smart enough to know they/we wanted.3

Bey Runs This and Every Town, Though

Some of the earliest words Beyoncé sings in On the Run, after Jay says he came from the block and then became the block, are:

And Beyoncé does that for all of On the Run. These are two professional entertainers who entertain professionally — but Bey is bigger than Jay now. You’ve never seen someone so ON as Beyoncé — she lives inside each song she performs and moves so beautifully and telegraphs everything she wants you to feel like some kind of mind assassin. It’s creepy, almost. Jay, meanwhile, goes out and … has a fun time. He can rap as well as he could at 26, which is impressive. But Beyoncé runs any town she’s performing in.

Things Bey nails in On the Run: a cover of Lauryn Hill’s “Ex-Factor,” the Timberlake vocal from “Holy Grail,” the Alphaville vocal from “Forever Young.” Yoncé tweaks the tear-jerking “If I Were a Boy” into a rockist-approved guitar song to follow up Rubin’s “99 Problems.” She hits every single mark and owns the show, and Jay knows it.

In the show’s closing moments, after the Carters let us in on their home movies and their adorbz Blue Ivy footage, Mrs. gives Mr. a to-the-point “It has been an honor, I’m your biggest fan, I love you so much” while Watch the Throne’s “Lift Off” plays. Then Jay stops the music to say, from the bottom of his rap-dad heart:

It’s been an honor and a pleasure to share the stage with you. I couldn’t have dreamed of anything else, than to be in a stadium with the woman I love, who I believe is the greatest entertainer of our time.

And even though we know he’s right, I can’t help but hear him borrowing from his little bro yet again:

'Naked and Afraid': Dangerous, Addicting, and Still the King of Nude TV

We Went There: A Journey Into the Dark Heart of ‘Friends’ 20th-Anniversary Nostalgia at Central Perk