The Bey-Jay On the Run Tour: Briefly Reimagined 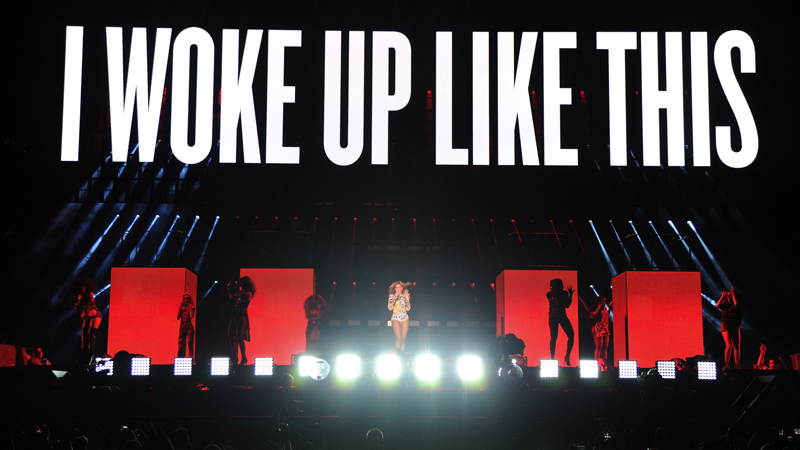 In case “On the Run: Imagined” doesn’t mean anything to you, know that it’s an important document written the day after the tour announcement, imagining what the On the Run Tour would be like, including the perfect set list.

But this was written in a very different time. Pre-elevator America. Jay Z and Beyoncé Knowles as unstoppable marital force, not 2014’s JFK and Jackie O, with rumors of a Marilyn. A simpler time, when sentences like this were uttered, without hesitation or pushback:

“America’s third-most important couple (Barack/Michelle, Oprah/Stedman) finally diving headfirst into the magnificent gumbo that is their love and their music.”

There was no chance, all the way back on April 29, that anyone could have predicted what would happen in mid-May. But it happened. So the natural question to ask, now that the tour has begun: How did that minor speed bump affect the direction of the show?

Let’s compare. This is what was supposed to have happened: 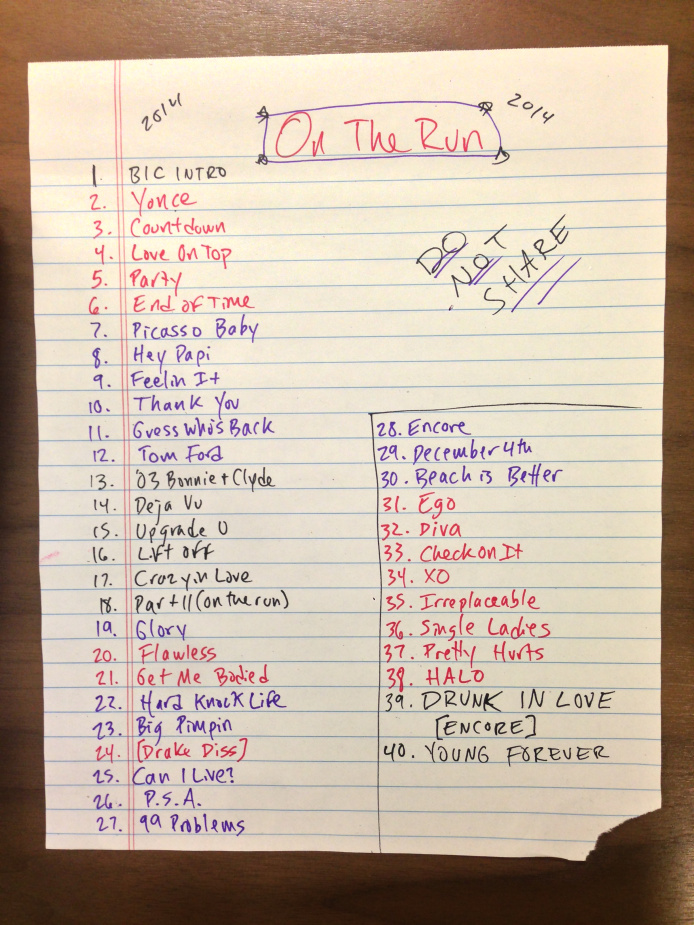 And here’s what actually happened, opening night, this past Wednesday, in Miami: 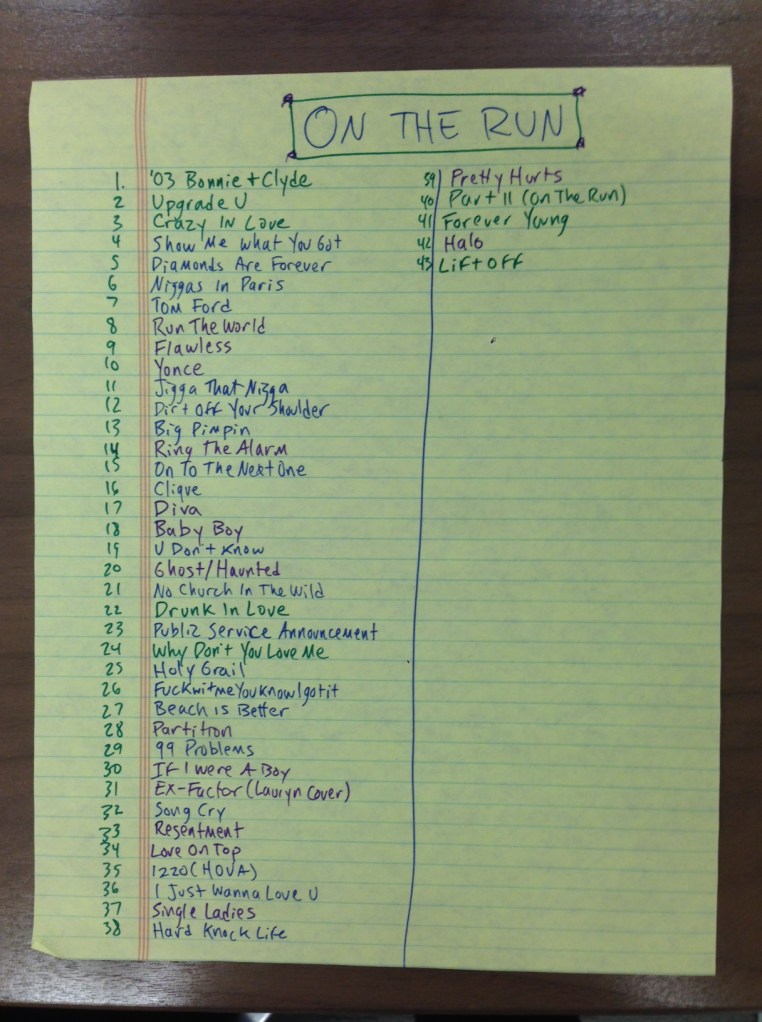 DAMN YOU, TROUBLE IN PARADISE. LOOK AT WHAT YOU’VE DONE.

There are a few things to discuss. First off: Who’s the genius who decided to distinguish between Beyoncé and Jay Z songs with blue and purple? Alarmingly JV.

Beyond that, this set list for On the Run 2.0 is very interesting. Insulting, because you begin to wonder why your services were even requested in the first place if the perfect blueprint was going to be discarded the second you walked out the door — but still interesting. Interesting because, despite breaking the rules I set, there is some good in what they’ve done. Some good. Surrounding that some-good, however, are some real reminders that this is post-elevator America. But first, the some-good.

Forty-three songs. That’s fantastic, even more than expected. A Beyoncé “Ex-Factor” cover? A pleasant surprise. Also, they went back and forth much more frequently than I imagined, choosing to avoid big solo chunks. But they also have to do it like this, because it’s post-elevator America. Because, for the purposes of existing in the public eye, nothing is more crucial than the unified front. Twenty Jay minutes followed by 20 Bey minutes followed by 20 Jay minutes, with the occasional moment of the two on stage together, just isn’t going to cut it. Because that would suggest two people who happen to be on tour together, not an iconic couple selling America on the idea that they’re Bonnie and Clyde.

So therein lies a net positive of post-elevator America: Bey and Jay playing musical hot potato. But there’s also some bad. Or, more accurately, some sad. Like the failure to play “Irreplaceable.”

In post-elevator America, it’s a bit awkward for Beyoncé to sing the lyric “I could have another you in a minute, matter fact he’ll be here in a minute,” on her tour with said rapper husband who could actually be replaced in a minute by someone who is set to show up in a minute, should Tina Knowles see fit.

Not all of the inconsiderate changes are elevator-related, however, and these are the ones that sting the most. Like the decision to end the concert with “Lift Off.”

Remember “Lift Off,” the Michael Bradley of Watch the Throne?

I put “Lift Off” as the 16th song, purely as an opportunity to give the audience a chance to sit down. Because that’s where it belongs. Because everyone deserves a break.

While the new order of the songs completely disregards the Macbeth-like arc I was shooting for, they didn’t disregard every single thing. They stayed true to most of the end of the show I outlined, with “Single Ladies,” “Pretty Hurts,” “Young Forever,” and “Halo” all appearing in the final stretch. While I was wildly disregarded, I saw this as a hat tip in my direction. A sign that says, “We really don’t like you, but we respect this one thing that you did, and we’re going to take credit for it and then file a restraining order against you.”

I can’t lie, that feels good. Being on the run with Jay and Bey. Leaving my stamp on history. Being a Carter. All that good stuff. It feels good.

Filed Under: Music, Jay Z, Beyonce, on the run tour, on the run, concerts

The Apocalypse Is Still Canceled, But the Sequel Is On: 'Pacific Rim 2’ Is Coming in 2017

The Right Reasons Podcast: ‘The Challenge’ Finale, ‘The Bachelorette,’ and Hope Solo