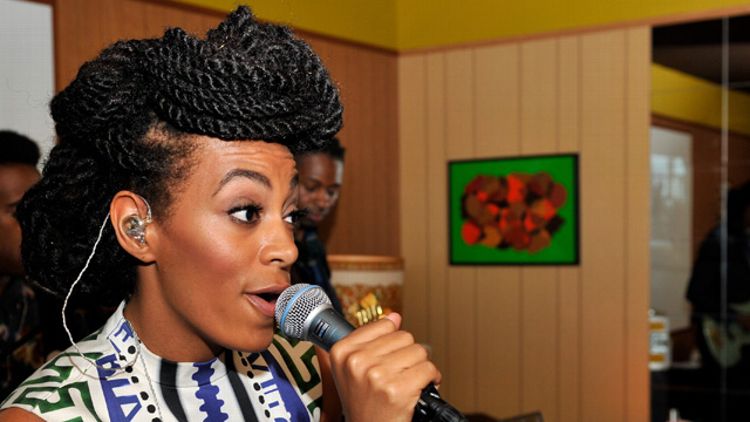 The stretch of highway from the Nashville airport to Manchester, Tennessee — which, if you’ve ever, even once, even accidentally, heard a Phish song, you might recognize as the home of the Bonnaroo Music & Arts Festival — is, for the most part, as standard as they come. There are a couple of deviations: for one, instead of just your regular McDonald’s and Burger Kings, roadside Krystals and Chick-fil-As beckon as well. Oh, also: Say you think, at first, you’re listening to a radio station that’s soberly analyzing Middle Eastern geopolitics. What you’re actually hearing, it turns out, is a conversation about whether or not recent clashes in Damascus mean the biblically prophesied end of days are nigh. And they will break out the appropriate Book of Revelation verses to compare and contrast. Welcome to the South!

Before I actually arrive at the campgrounds, I get a phone call from a Bonnaroo rep: Would I like to check out rehearsals for a Superjam? If the term sounds familiar, it might be thanks to one of last year’s iterations, when Questlove lured beautiful recluse D’Angelo onto the Bonnaroo stage for an instantly legendary set of Hendrix and Zeppelin cuts. This year, Bonnaroo has put together its first hip-hop Superjam. On hand will be: RZA, Solange, DJ Jazzy Jeff, Schoolboy Q, Pharrell’s partner in crime Chad Hugo, and, serving as the spine of the operation, the long-serving funk band Lettuce. Of course, I answer “yes” immediately, turn the car back toward Nashville, and find — tucked between Civil War–era Fort Negley and the local Dianetics Center (“How does Scientology work? Come in and find out!”) — SIR Studios.

The rehearsal room is a big, wide space with high ceilings and padded white walls dotted with black rhombuses of, presumably, sound-muffling material. I get there during what’s supposed to be a dinner break, but the music hasn’t actually stopped. Jazzy Jeff, in dark sunglasses and a Phillies hat, is spinning early Michael Jackson; as I walk in, Chad Hugo, casually rad in a white T-shirt and Lennon glasses, struts by me, still singing along to the bass groove on “Don’t Stop Till You Get Enough.”

Meanwhile, the dudes in Lettuce are running between instruments, jamming along: These are the kind of music nerds who consider it a fun break from work to play instruments other than their regular instruments. (Later, Hugo will pick up a trumpet and jam like he’s been playing it his whole life; at another point, a guy with a snapback pulls out, I swear to God, a flute.) Guest keyboardist Borahm Lee, who’s played with Kanye West, jumps on Nigel Hall’s Rhodes, and promptly gets booted. “You can’t play Rhodes anymore,” Hall, in cargo shorts and a GI Joe hat, shouts out. “You’re done!” Lee, quietly, smiling: “Oh. You just smashed me.” Then the band turns its attention to the deep cuts Jazzy Jeff is dropping. “Sounds like a Fela Kuti beat,” one of the horn guys calls out. “That’s Harvey Mason! Are you fucking kidding me?” Hall responds, bug-eyed, incredulous about the obscurities being trotted out.

Corey Smyth, who managed Black Star and produced Dave Chappelle’s Block Party, is the dude who pulled these other dudes together. The loose concept, he explains, is to pay tribute to some of the great sources and practitioners of hip-hop sampling. (Without giving too much of Friday’s set list away: At one point, Hall trots around the floor, mic in hand, doing a damn fine James Brown impersonation.) Smyth says Jeff was the first person he called, and once he said yes, “the dominoes started to fall.” There were a few different iterations, and, of course, the understanding that it all might fall apart — Earl Sweatshirt was supposed to be there, but had to cancel his Bonnaroo appearances due to pneumonia; Solange is slated to get into rehearsal after a 15-hour trek from Zurich — or never quite click. But that’s part of the fun. “I learned a long time ago to let the creative happen,” Smyth says. “If you sit back, they work on the bonds themselves.”

Jeff’s done this kind of thing before, with the Roots, so I wonder if he asked for any advice from Questlove, whose Superjam went off so well last year. “Not at all,” he shoots back, smiling, supremely confident in his abilities. “My job is to add spice, to fill in the gaps,” he explains. “You have a real loose, rough structure, and with such accomplished musicians, it can be an awesome show.” So no nerves? “Not one bit. All nervousness is out the window. You come in with an open mind, you hear how great the band is — and, after a couple of days, you realize, you’re just dealing with fellow music lovers.”

After food, the rest of the band shuffles in. It’s a motley bunch: a saxophonist in a Supreme cap, a guitarist in Jordans and a bright red fitted, a bassist with long, blond metal-dude hair cascading down his neck. Drummer Adam Deitsch is the designated bandleader, but pretty much everyone takes their turn to chime in, shouting out instructions over the din and singing out chords: “E Flaaaaat! B maaaaaajor!” Here and there Lee drops in with samples, including the sound of Rev Run’s voice chanting out “body movin’” and “krush groovin’.” When track lists are handed around someone calls out, “Is this a W-9?”

Solange shows up only 15 minutes past schedule, looking — in a pink, lacy dress, tie-dyed platforms, and long braids — all the fresher for just having arrived from the land of the Swiss. Introductions are made, during which the guitarist drops his ax with a loud clang. Everyone laughs but he shrugs it off: “It’s a good guitar! American made!” Solange takes her spot at the lip of an imaginary stage, and, one hand in her dress pocket, immediately starts grooving. The chatter is continuous: “Should we go up a half a key? G? Are we doing G? Go to G? Let’s go to G.”

CX, a friend of the band, shows up, in tropical cotton shorts and slippers, to much hooting and hollering. “The brother CX is in the building …” Hall calls out, and as more screams arise, “… in what appears to be his pajamas.” They roar louder. Now Nigel’s practicing stage banter, with input:

It’s around 10 people, quibbling, finessing, and bullshitting, fueled equally by Jameson and Skittles. But when they drop in, they drop in together. At one point, Lettuce lock in on a particularly aggressive rendition of Dilla’s “Workinonit,” and get cooking. Eye contact is exchanged, as are pleased smiles, but, for once, as the beat really builds, no one says anything.

Filed Under: RZA, We Went there

Songs of the Week: Kelly Clarkson Gets a Ring on It, Problem Rolls Up With T.I. and Snoop