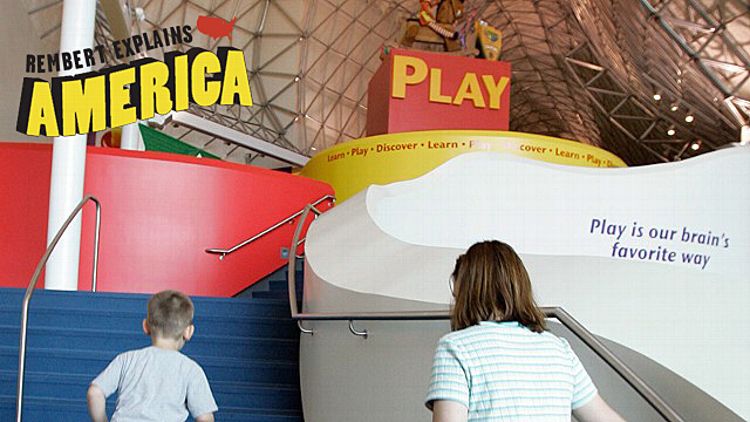 An “authentic” Rochester experience this was not.

Driving into the upstate New York town, I had one objective, and, much to the chagrin of the 51 individuals who passionately recommended it, I wasn’t there to eat a Garbage Plate.

Perhaps the opposite of this fantastically nausea-inducing, heartburn-creating, diarrhea-inciting experience was my Rochester destination, just 1.2 miles away from Nick Tahou’s, the most famous purveyor of said dish.

I was on the hunt for the National Toy Hall of Fame.

Only a small amount of encouragement was necessary to convince me this six-hour drive was worth it. One web page, in fact.

This place was treating checkers and Tonka Trucks like Hank Aaron and Willie Mays. I needed to know everything about it. Also, I needed a full explanation of how blankets made the cut a full year before dominoes.

I was stunned by the Hall of Fame’s size when I got there. Confused as to what could possibly fill this space, I walked toward the building, assuming I’d be back in my car within the hour.

And then I got to the door:

“Oh no,” I said aloud. But it was too late. The automatic doors opened and there were the screams of children. All of the children.

I shouldn’t have been there. This was a mistake.

But with only a pen and notepad in hand, I continued on through the sea of shrieks stemming from the merry-go-round, and made my way to the registration desk.

As this happened, two female employees helping no one gave me a rude but appropriate look indicating What is this creep doing here? I also detected a smidgen of But I kind of dig it. That last part was probably all in my head.

After I paid my entry fee and got a wristband, it was time to explore this National Museum of Play.

Typically, when I walk into unfamiliar scenes that I may write about, my default demeanor is to blend in with the crowd, slyly take notes, and sneak in pictures wherever I can. For moral and potentially legal reasons, this was not going to fly today.

I was the only visitor here who was not 5 to 8 years old or some form of guardian for said 5-to-8-year-olds. There was no blending in. And, as that guy, I couldn’t take pictures while little children ran around.

I shouldn’t have been there. This was such a mistake.

Seeing a stairway, I walked up to the second level, if for no other reason than to temporarily escape the glares from employees, parents, nannies, and Vietnamese drag queens alike.

In this section of the second floor, there were no children. In fact, there was no one but me. Looking around, trying to find this Hall of Fame so I could leave and pretend as if this never happened, it became clear this was a section of the museum for a different crowd.

This portion of the museum had physical, glass-cased time capsules of items I sorely wanted to steal, separated by decade. The Billy Ocean–Toni Basil–Donald Trump installation was part of the ’80s display. But there was more.

I wasn’t leaving this museum anytime soon. This was the proverbial “big-kids’ table” and I was in my element.

Weaving through the decades, it seemed more appropriate to call this place the “National Museum of Artifacts (That We Have and You Wish You Had But You Can’t Because They’re Ours, Son).” Everything was in pristine quality and displayed in an almost-taunting way.

I CAN’T PLAY WITH YOU WHEN YOU’RE IN A CAGE INSIDE ANOTHER CAGE.

As I had this out-loud conversation with Furby, three kids ran behind me. Twenty more followed, with two chaperones trailing. My 20-minute out-of-body collectibles experience had ended, and it was, again, time to find the Hall of Fame Etch-A-Sketch so I could exit the recess factory.

Weaving through the maze of decades, I stumbled on a section dedicated to the history of video games. I learned that the National Museum of Play, in addition to housing the National Toy Hall of Fame, is also home to the International Center for the History of Electronic Games.

Again, as I did in the decade-by-decade artifact section, I acted as a respectful museum-goer and read every single placard. This was a great place.

I was really beginning to lose interest in Easy Bake Ovens (inducted 2006) and Raggedy Ann and Andy (2002).

Then this “Arcade” sign and I stared each other down for a few seconds.

I have a video-game problem.

After PlayStation, I went on a 12-year cleanse. There were no video-game consoles in my home during that time, because there’s nothing I enjoy more than video games. And when you have anything else in your life to do (homework, bathe, sleep, make friends), it becomes an issue.

And I knew, if I stepped into that chamber, I may never reemerge. Six seconds later:

The junkie was back.

Those hyper, loud children running around were little more than white noise at this point. This museum was put here for my enjoyment.

Paperboy, Tron pinball, Klax, Missile Command, Tempest, Track and Field, Road Blasters, Discs of Tron, Indiana Jones and the Temple of Doom, and Root Beer Tapper were just some of the games available in the space. Not knowing what to do with such an aggressive, pants-saggingly-heavy number of tokens, I tried to play everything once. I tried, and then I saw her, in all of her glory.

This is a day-ender. All other plans were canceled. After playing video games for 45 minutes, and nearing my second full hour in this museum, I still had about 70 tokens. And they were all going to NFL Blitz/NBA Showtime, the combination Pizza Hut–Taco Bell of arcade games.

The brain is an amazing organ, in the sense that you can not do something for 12 years and then pick up exactly where you left off, without hesitation.

There really was no need to enter in my personal information, but it felt right. Using ancient reflexes, I successfully entered four cheat codes and, upon taking over on offense, hit “up” twice to hide my plays. This was obviously unnecessary, since there wasn’t much of a worry that CPU would look over my shoulder and realize that I alternate between “Da Bomb” and “Turmoil” every other play, occasionally flipping it to reverse the field.

Unfortunately, about 45 minutes in, I did something and the game broke. So I looked around, took my 30 tokens, and fled the scene.

This was probably an omen that I’d been here long enough. Even in the midst of my nostalgia trip, it was getting a tad weird that I’d been effectively crashing a pizza party at Chuck E. Cheese for almost three hours.

Twenty minutes later, while I was on Stage 8 with King, an announcement from the PA system:

In five minutes, please join us in the Caterpillar Room for the Toddler Book Club.

I stopped playing, midgame, packed up my things, and walked out. Spotting a mom at the tokens machine, I gave her what I had left without even asking if she wanted them, and looked for the exit. I had been here for three hours and had completely lost interest in the Hall of Fame installation I’d driven six hours to see.

Yes, there were plenty of things to distract me in my march out. Like this:

And, of course, this timeless family-fun board game THAT NO ONE TOLD ME EXISTED:

But I was focused. It was time to leave. There was work — adult work — to be —

The National Museum of Play was officially playing dirty.

They’d strategically placed heartstring traps all over the museum, so I’d never actually leave. And even though I had no idea they had made a white version of “My Buddy,” the sight of these red overalls, blue orthopedic shoes, and rainbow top almost brought a tear to my eye. As an only child, I’m pretty sure My Black Buddy was my first friend.

Oh, OK. Just my first baseball glove. Did someone tip them off that I was en route to Rochester? I kept looking around for someone to hold, but then remembered everyone was 6. This was a lot. And before I left this portion of the museum, just to top it all off:

I needed to get outside, immediately. Oxygen was of the essence. Oxygen and somewhere to sit.

On my way out, I did finally reach the National Toy Hall of Fame. It’s housed in a beautiful bubble of a structure:

Had I not been emotionally spent, this might have been a more remarkable exhibit. But I was ready to go. Even with the display of Lincoln Logs begging me to build a cabin, I had to leave. This feeling was reinforced as I walked down stairs to find an “Itsy Bitsy Spider” sing-along and an old-timey conductor-led train ride:

It was time to go. So I walked into the gift shop, bought three Berenstain Bears books because they were having a sale, and finally walked out.