Wu-Tang Played a New Song on ‘The Daily Show’ Last Night, and Jon Stewart Was a Real Mensch About It 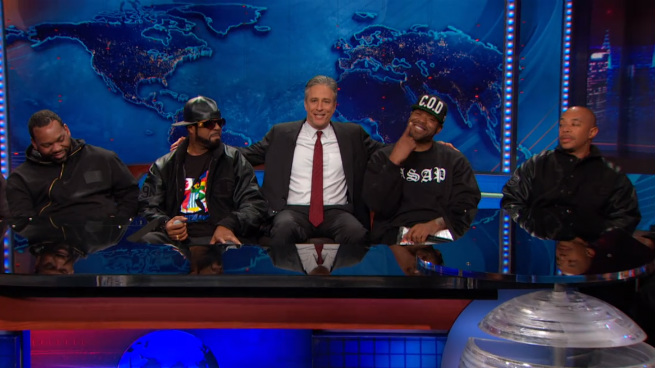 We don’t know how or why, exactly, The Daily Show was selected as the launching platform for official new music from the Wu. We’re just happy that it happened: The combination of a relatively unified Clan — playing a new single titled, in honor of Mr. Youngblood Priest, “Ron O’Neal” — and the ever-menschy Jon Stewart was something pretty special.

It started with a sit-down, Stewart delightfully excited to have all present members active and accounted for and flanking him gloriously. “First of all, let me say this — it is an honor … for the uninitiated, let’s just get a quick intro down the line. We’ll start with Ghost.” Just Ghost? Well played, Stewart.

The rest of the roll call (which ended with, NO SPOILERS, a solid comedic bit) was nicely instructive: U-God stumbled over his own nickname; GZA skipped the litany of alter egos for the simple “yo yo, this is GZA”; RZA said “bong bong.” We also found out that the new album, still at this point called A Better Tomorrow, will be out in November, which, if true, will mean it’ll come exactly a year past the group’s 20th anniversary. (By the way, this isn’t the “one copy only” album; no word on what the hell is going on with that. Oh, also, let’s just pray that the atrocious album cover, seen at the 12-second mark, isn’t real.) And then Stewart, bless his heart, asked actual questions he was interested in hearing actual answers to, in his particular way: “Ghost, you’re the heart, you’re an emotional guy … did you have reservations about coming back and … laying down things?” And true to form, the dudes didn’t try to act cute for the late-night cameras, answering the questions about their fragile unity with earnestness and care. They wrapped up with a gift for Jon, a pretty rad ODB shirt. “Ohhh. Ohhh you know I’m gonna sleep in this!”

The performance of “Ron O’Neal” was, let’s be honest, a bit more than awkward, but with promise: By the end, RZA was speeding over his own words and flinging the mic stand. Also, Masta Killa got some shine!

Better was their well-worn classic “Triumph,” performed as a web exclusive. “Please welcome once again, the Wu-Tang Clan,” Stewart says, his hand forming uncontrollably into a sheepish thumbs up as he skedaddles away. Proving, once again, that Jon Stewart is us all.