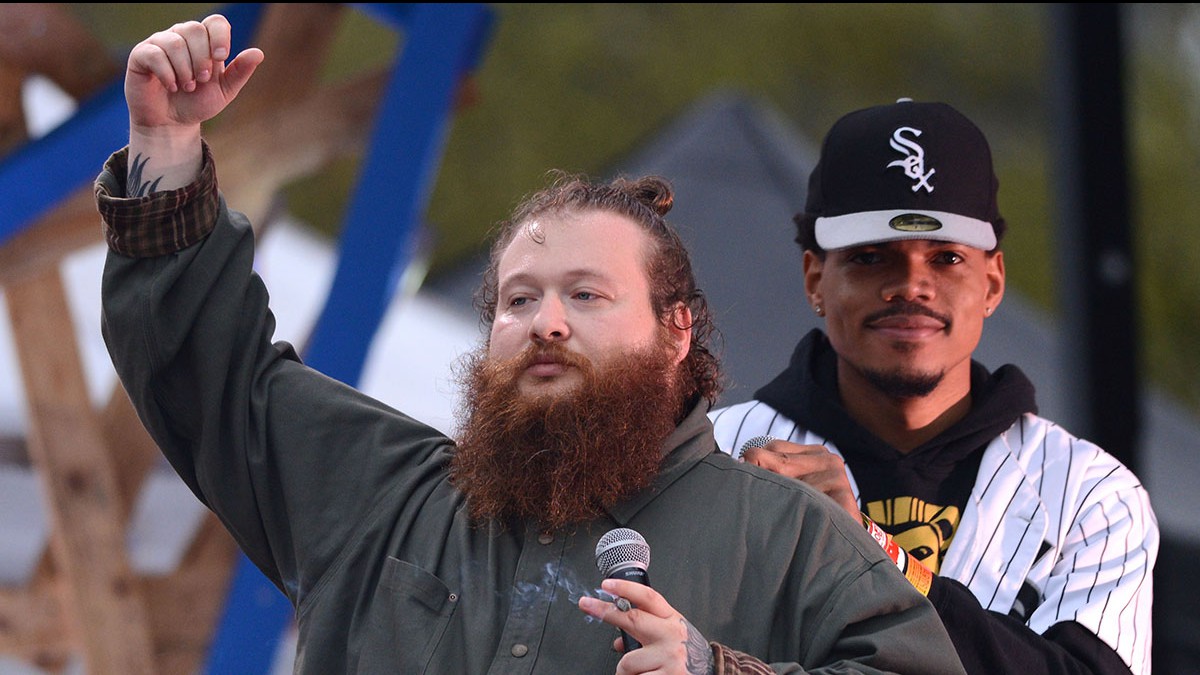 Action Bronson’s album Mr. Wonderful came out a little over a week ago. I didn’t write about that — at least not directly, or at least not the whole thing, and also not about what it means for Action Bronson, because that already happened. This is about a small piece of the album, specifically the song “Baby Blue,” and even more specifically than that, Chance the Rapper’s guest verse on “Baby Blue.” Here it is:

I love this verse so much. It’s a good verse. It’s a strong verse. It’s a fun verse. Some dummies on the Internet were arguing that it was bad because of the part where Chance raps, “I hope you never get off on Fridays / And you work at a Friday’s / That’s always busy on Fridays,” but far as I can tell, that’s the best part of the whole thing. It’s clever, it’s tightly wound, and it is thematically tied to the rest of the song. Those are the things you look for in a guest verse. If you can find one of them, then hooray, because there are for sure more bad guest verses than not (all of this is assuming the song itself is good, because a boring guest verse on a boring song means the verse matches but it doesn’t mean it’s good). If you can find two of those things, for example Lil’ Kim’s guest verse on Mobb Deep’s “Quiet Storm” in 1999, then all of a sudden you’re inching toward honor roll level. And if you can find all three, like when Jay Z pulled the legs off Kanye’s “Diamonds From Sierra Leone” or when Busta Rhymes obliterated A Tribe Called Quest’s “Scenario,” then you gotta take a week off work and sit in the dark and listen to it on repeat 200 times in a row.

Rap is beautiful. Guest verses are beautiful. This is a (noncomprehensive) list of the different levels of guest verses, ranging from GTFOH to Holy Ascendance. It’s a guide more than anything else. And just because a person lands at one level on this in one specific instance doesn’t mean he or she permanently resides there. The aforementioned Jay Z, for example, is responsible for some of the most transcendent guest verses of all, but he’s also responsible for some garbage (his addition to Juvenile’s “Ha” being the most obvious example). Without further ado, here’s the math. 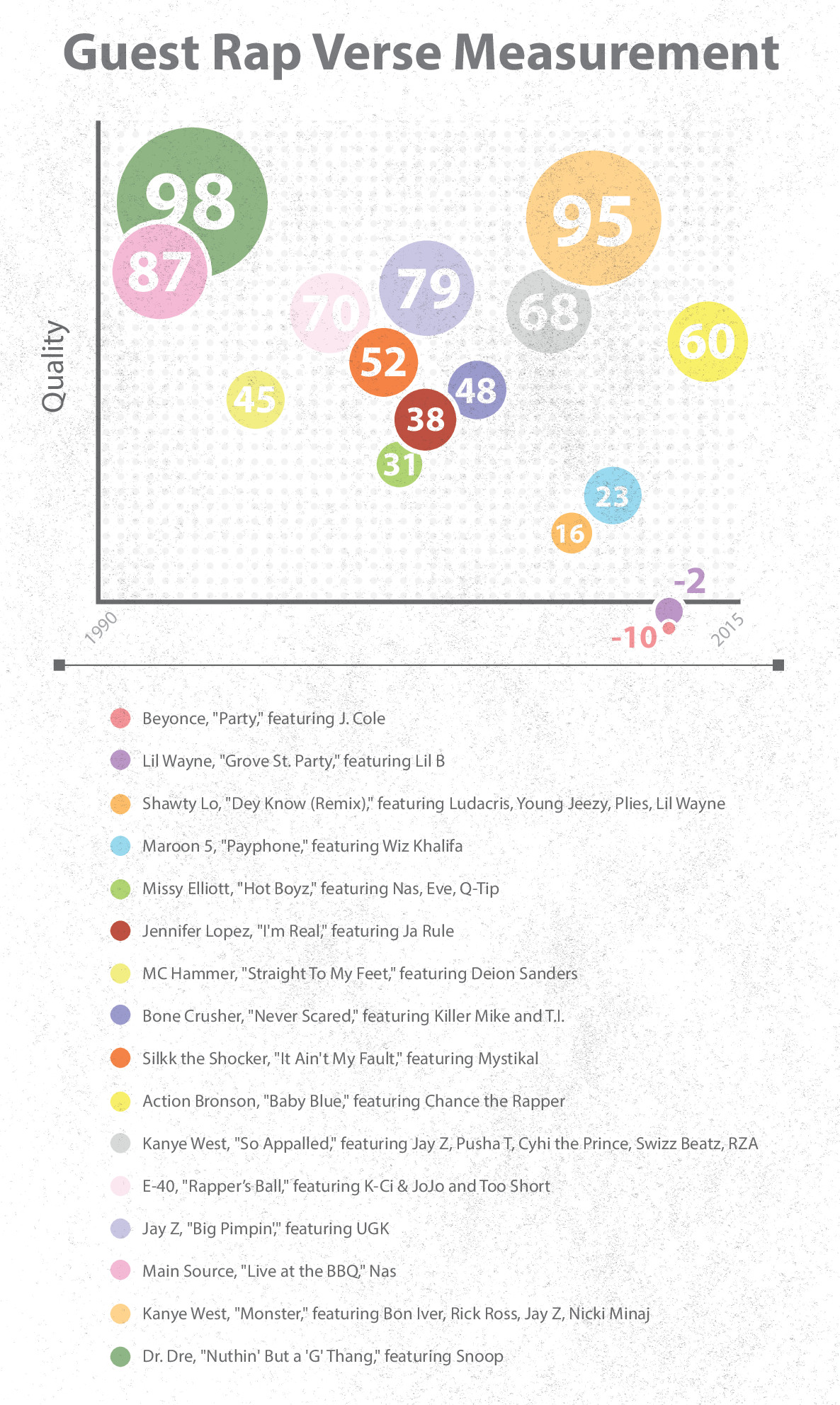 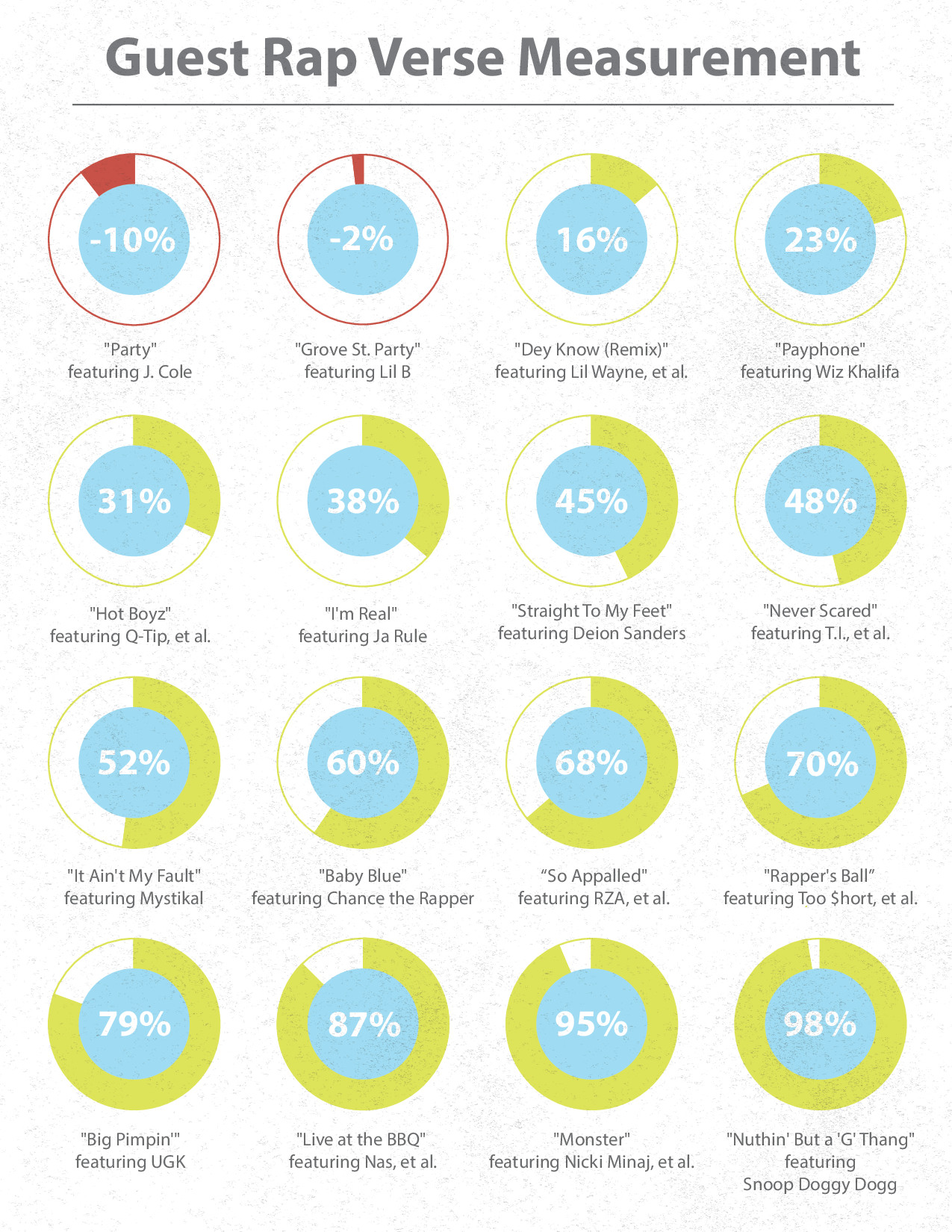 This one wasn’t all Jermaine Cole’s fault. There was a bit of disappointment already embedded in it. Andre 3000 was the original guest rapper on “Party.” He didn’t want to do the video for it, though. So they needed a replacement. I imagine there was a very long conversation at the Knowles-Carter home between Beyoncé and Jay Z, him urging her to put J. Cole on there, her saying she’d rather try to stop a rotating helicopter blade with her forehead. He probably flashed those big, puffy, walrus-y eyes at her, she swooned, and there you go. Here we are. You got J. Cole instead of Andre 3000. And expecting to get Andre 3000 but getting J. Cole instead is like expecting to get Beyoncé but getting a box of turds instead.

Do you remember the buildup to this? This was from Wayne’s Sorry 4 the Wait tape, back before he’d used up all the goodwill he’d amassed during his brilliant 2006-08 run and people were still hoping Wayne had not turned into a dumpster and back when Lil B was still interesting and exciting. The track list came out and it was for real one of, like, maybe four times when the release of a track list inspired any sort of feeling above contempt. People were legit excited. Lil Wayne and Lil B? Together? Oh wow. OH WOW. And then it came out. And then everyone was super upset about having ears.

Wayne ends his verse by saying “But I am thee shit / And they just poop stains,” so that’s how this verse went.

I suspect the whole point of a guest verse is to enhance a song, or if not that then at least to round it out, or if not that then at least just don’t fuck it up, my dude. Wiz never even got that chance, though, because “Payphone” is the worst kind of song, which is to say it’s heedless and aggressively annoying. The only way Wiz was avoiding a poor score here was if he’d just not even bothered to answer Adam Levine’s email asking him to be a guest feature on it, and I have to believe Adam Levine’s email address is something terrible, something like HotAdam69@gmail.com. 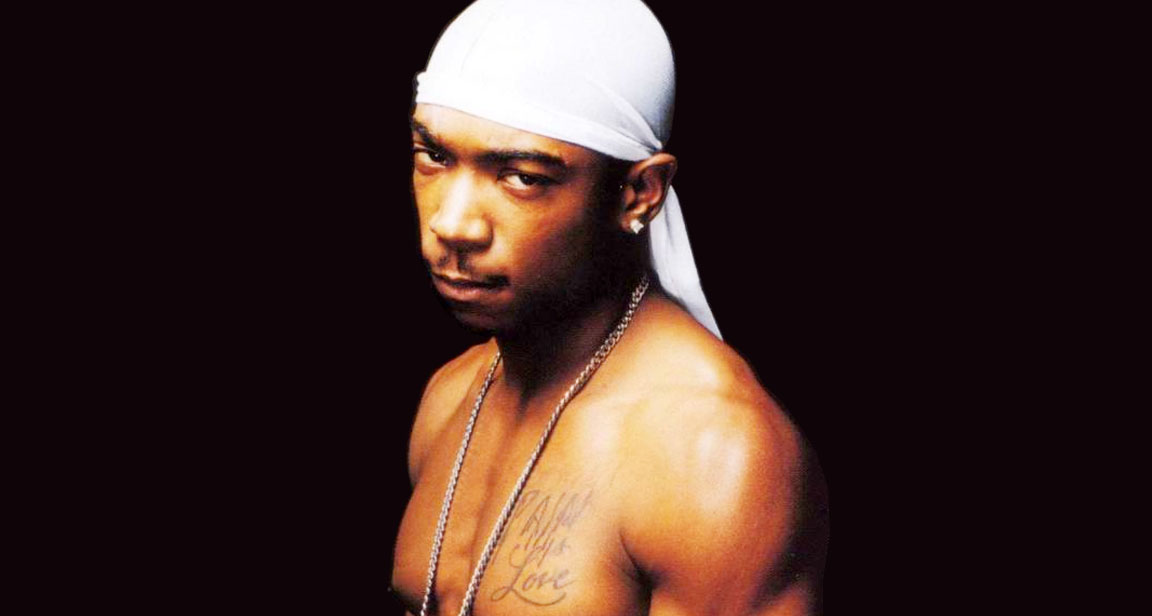 Ja Rule was so perfect for that goofy pop-rap super period that happened after Puffy’s dominance and before 50 Cent made being “real” cool again. Nobody could touch him. He sold more than 8 million albums between 1999 and 2002 despite only ever being good at sounding grumbly and wearing headbands. But that was the only time period in which he could exist, so when it went away, when 50 Cent figured out the perfect pitch for the modern gangsta rapper — and, to a quieter but equally important extent, when Clipse made drug dealing in rap music an exercise in efficiency and atomic specificity — Ja fell off the side of the earth.

Let me give you a bit of context here, because 45 percent would seem like a poor score, and I guess maybe for some it is, but not in this case. This song was released in December 1994. At the time, Deion Sanders was in the middle of a professional football career (he played from 1989 to 2004) and a professional baseball career (he played from 1989 to 2001), which is remarkable in itself. He was named NFL Defensive Player of the Year that season. He was a two-time All-Pro pick (on the way to four more selections). And he was a month away from collecting the first of his back-to-back Super Bowl rings. Deion Sanders scoring a 45 percent on the Guest Rap Verse Measurement is incredible. Imagine DMX averaging a triple-double in the NBA for a season. Imagine Missy Elliott snatching up the light heavyweight UFC championship. That’s what this was.

Examined by itself, T.I’s work here is serviceable, if not admirable. However, this was before he’d perfected his tiny tough-guy persona on guest verses,1 so standing next to Bone Crusher and Killer Mike, the former of whom looks like two refrigerators tied together and the latter of whom has the gravitational pull of the sun, he feels capable but inadequate, which is exactly how you earn a 48 percent on this, or anything really.

The worst thing that’s ever happened to me in my whole entire life is not getting an entire Silkk the Shocker and Mystikal duo album. 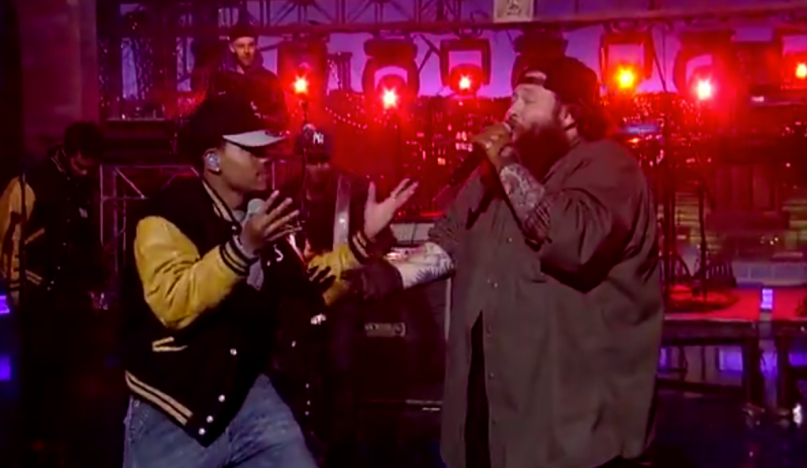 The best thing that’s ever happened to me in my whole entire life is RZA saying “fuhhkin’ rehdkolus” over and over and over again. I love the idea of Kanye calling RZA, asking him to be on the song, RZA asking what he has to do, and Kanye telling him, “Really, you just gotta say ‘fucking ridiculous,’ but in the most impressive way anyone has ever said anything.”

I read this interview Pusha T gave where he was talking about working with Kanye. He was explaining his verse on “Runaway,” which is just perfect. He said he kept writing stuff and Kanye kept saying no, telling him he needed it to sound more douche-baggy because that was the whole point of the song, which (I’m assuming) is how he arrived at the bar “I-I-I I did it / All right, all right, I admit it / Now pick your next move / You can leave or live with it,” one of my favorite lines ever. Kanye West is so beautiful.

Too Short’s verse here sits right in the pocket, and that’s hard to do, and the base minimum for scoring a 70 percent.

Jay Z rapped, “In the cut where I keep ’em / Till I need a nut / Till I need to beat the guts / Then it’s ‘beep, beep’ and I’m picking ’em up / Let ’em play with the dick in the truck” — this is only the third-best verse on this song. Bun B rapped, “Go read a book you illiterate son of a bitch and step up your vocab” and still had only the second-best verse on this song.

All the Members of Main Source: Nothing. Just working on this song. Wanna hear it?

Nas: It does. Guess what?

This was a watershed moment in rap, and the further we get away from it the more monumental it feels. Everything played out perfectly; the words, the way she said the words (more important than the actual words themselves), the balance of the video, the symmetry of her characters. Was her verse here the first time that a majority of rap fans agreed that, even if only for the 80 seconds it lasted, the best rapper on the planet was a woman? Because I think that might’ve happened.

Sitcom Revivals That Should Actually Happen