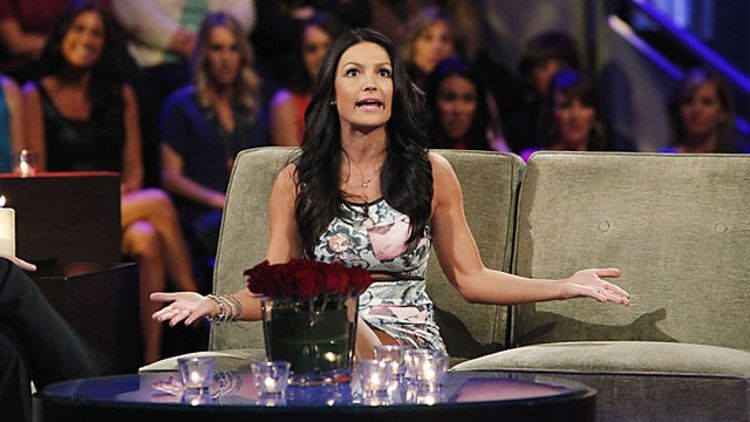 This week, it was just me and Grandma. No friends. No wife. Just us. Grandma was fired up — taking her position on the couch around 7:15 p.m. Around 8:15, she grabbed her cane and scrambled to the back of the house in a panic, thinking that we had missed the first 15 minutes. When I explained to her that we were recording the show, she gave me a look that said, “I don’t care if you are recording it, The Bachelor is on, and we’re watching it now.”

Well, Grandma was right. Women Tell All shows are always kind of a drag — the only real joy is in evaluating exactly what type of “I just got dumped on national TV so I need to change up my look” adjustments the women made to their hair. But this season’s show had a moment — a transcendent accusation that severely damaged Sean’s reputation as Mr. Perfect-Bring-Home-to-Mom and totally cemented one bachelorette’s reputation as that of a hot, obsessive, uber-organized alien cyborg. It was so fucking good.

AshLee (The Bachelor, Simmons), 10 points: Throughout the season, AshLee would rarely make a statement that didn’t feature her “trust and abandonment issues” and how she had “given herself” to Sean. When someone with “trust and abandonment issues” goes on a nationally televised competition in which 96 percent of the contestants are lied to and abandoned, you know it isn’t going to end well. Predictably, AshLee was not pleased when she was sent off. She had a couple of months to watch the shows back, change her hair color, and plot her strategy for going after Tierra and Sean (2 x 5 = 10 points) on “The Women Tell All.” It was glorious. Let’s run back the tape:

Liars will never admit they’re liars, I mean, they are liars, so the only real way to decipher whether they’re lying is by paying close attention to their denial. The first GRTFL Top 5 this week is The Top 5 Ways That You Could Tell Sean Was Lying listed from “That wouldn’t hold up in court” to “Why doesn’t he just own it at this point and turn into a heel like Hulk Hogan did?”:

5. His face: He never once gave her the scrunched up “What kind of bullshit is that?” face. People that tell the truth and good liars will give you this face 100 times out of 100.
4. Her “C’mon, Sean” face: 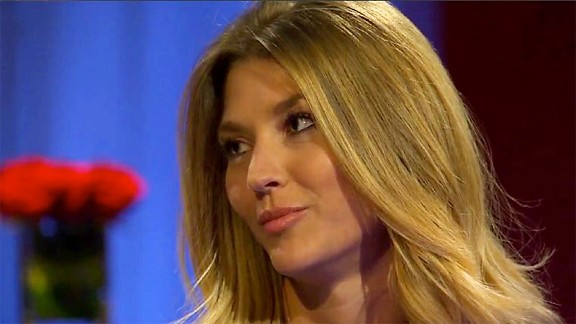 3. No dismissal: When someone accuses you of something you didn’t do, you don’t engage; you don’t vehemently defend yourself, you dismiss it. Sean immediately became defensive. If there’s nothing to defend yourself against, then why are you defending yourself?
2. It was fantasy suites week: Shocking news alert: Men will lie to get in women’s pants. Imagine the two of them alone in the fantasy suite: The clothes are coming off, the lights are being dimmed, and the only thing stopping AshLee from really “giving herself” to Sean is the fact that he is, ya know, dating two of her friends at the same time. Sean had to eliminate that obstacle. It’s simple logic.
1. HE TRIED TO CHANGE THE SUBJECT: Notice that in the middle of his denial, he drops a “The fact remains that I can’t check on everyone”? He straight up tried to change the subject right in the middle of his denial! Rookie liar tactic!

It’s clear that Sean said something to the effect of, “You know, I don’t like those other two girls” in order to get coitusy in the fantasy suite. The only question is, what exactly did he say? While at the Clippers game a couple of nights ago Bill did that thing where he “suggests” something for this column: “Here’s a Top 5 for you this week — the Top 5 guesses at what Sean actually said.” So, here goes, the Top 5 Guesses at What Sean Actually Said, listed from “That ties up some loose ends” to “Jacoby, did you bug the fantasy suite?”:

5. Maybe he said exactly what AshLee says he said: “There is absolutely nothing between those two,” but he just meant, you know, they’re not lesbians.
4. “You can give yourself to me, AshLee. You can trust me. I would never tell you that I only have a connection with you, sleep with you in the fantasy suite, and then break up with you the next day. I would never do that.”
3. “Do you still have the same feelings in those two?” [Gestures inappropriately]
2. “Do you still have that blindfold?”
1. “I’m totally not into the dumb one and what’s-her-name. Can we have sex now?”

Obviously, Grandma had the best take:

Me: “Do you think he said it?”
Grandma: “With so many women he was following, you have to forgive him of any mistakes.”

Shamar (Survivor), 40 points: Shamar’s commitment to lethargy is amazing. Not only is he always talking about leaving the show (15 points) and spending 19 hours a day in the shelter straight-up napping … 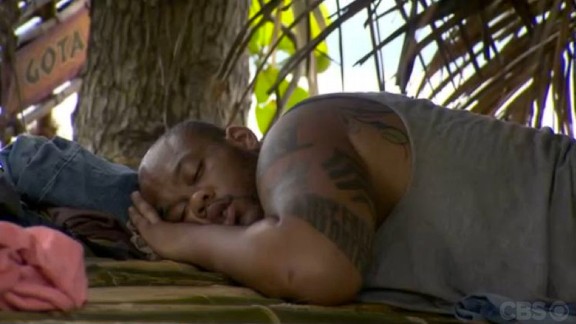 … this week during one of his rare conscious moments, he dropped an “I’m not leaving, y’all going to give me rice once a day.” AND THEY BRING HIM THE RICE! Life lesson time: People are going to do to you whatever you allow them to do to you. Think about that. You can’t bring him the rice. You just can’t.

During one of his naps, he scratched his eye in his sleep. (He does everything in his sleep.) The eye scratch led to swelling, which led to Jeff Probst coming on the boat with his medical crew (20 points). The medical crew decided that he wasn’t fit to continue, and he was sent off for treatment on his eye. This made Shamar cry (5 points). It’s still unclear if he was crying because he had to leave the game or because they woke him up. I’m assuming the latter.

Tierra (The Bachelor, Jacoby), 15 points: I am straight up #TeamTierra. A solid 45 minutes of the show was Tierra defending herself against the dickish line of questioning from Chris Harrison, the boos of the crowd, and the accusations of the other bachelorettes (5 points). What exactly did Tierra do wrong, aside from not saying good morning to the other women who were dating the guy she was interested in? The jealous, non-sparkle-possessing ladies’ attacks on Tierra is the subject of my Questionable Moment of the Week:

What if Tierra isn’t a morning person? What if you just didn’t hear her say good morning? Why do you even care if she didn’t say good morning? How many times could this have possibly have happened? If she doesn’t say good morning to you once, why even ask again? Is not saying good morning really the only reason you’re mad? Are you mad at her for faking injuries to get time with Sean? Why didn’t you fake an injury, then? Will we ever learn what’s up with the hole in her forehead? Is that where she keeps her sparkle?

Tierra made it clear that while she “didn’t come here to make friends” (10 points), she also didn’t give everyone the stink eye that Chris Harrison accused her of. You would know if she gave you the stink eye — she even went so far as to demonstrate her stink eye on the show. Ladies and gentlemen, Tierra’s stink eye: 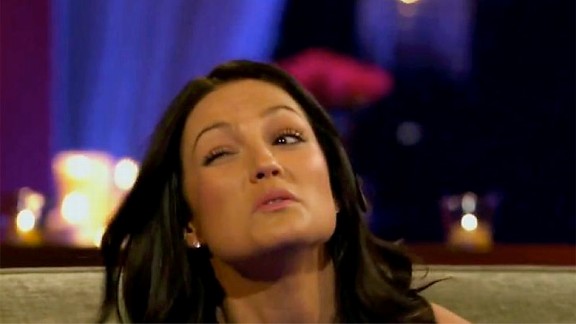 Now, what does Tierra do immediately after getting dumped on The Bachelor? She … well … let’s let her tell it: “I did The Bachelor and thought, you know, I could find love here. But when I went back, I rekindled and it was in God’s favor that it worked out.” Not only did it work out, he put a ring on it: 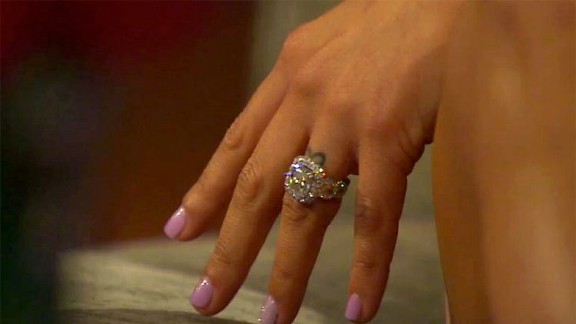 Now, having saved for a year and borrowed money from my homeboy (thanks, Jesse “The Body”), I presented my (now) wife with a ring approximately one bagillionth this size. Tierra’s ring is either made of rock candy or she’s engaged to Warren Buffett. Either way, it isn’t going to make her fingers any less stubby. Oh, wait, I forgot I was #TeamTierraForEva. Sorry, girl.

Sheri and Eddie (Survivor), 5 points: Sherri did the thing I love during an argument (5 points) when the person trying to accuse the other party of being belligerent does so in the most belligerent way possible. While getting into it with Eddie, Sherri’s voice went all Exorcist and she yelled, “YES, I SAID THAT! YES, I SAID THAT! YOU’RE ACTING LIKE A MADMAN!” With Hope gone and Brenda soon to be bounced, my favorite non-Cochran character with a chance to make it to the merge is this little fella: 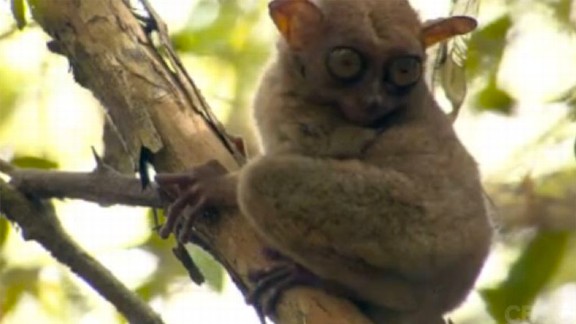 Have you seen homeboy do his little leap-and-eat-a-mantis move? It’s the wildlife version of the Crawford/Griffin alley-oop.

Kim (Housewives, Jacoby), 5 points: I give up. I have no fucking clue what’s up with Kim this season. Is she sober? Is she drunk? Is she on pills to keep her sober that make her act weird? Is she on pills recreationally? Is she just a loon? I have no idea. This is one of the greatest mysteries of modern society. What the hell is the deal with Kim? One moment she’s crying (5 points), the next she’s smiling, and the next she’s making a lucid point. There’s a 15 percent chance that she’s a Rhodes Scholar and her participation on this show has been a science experiment. Wait, that’s not true; it’s more like 20 percent.

Sarah (The Bachelor, Simmons), 5 points: Grandma had a lot to say about Sarah With One Arm who cried this week, (5 points) and none of it is going in this column. Let’s just say that Grandma really enjoys having both of her arms. After the show was over, I turned to Grandma and said, “Do you want to go on the show?” and she responded, “[Huge laugh] I don’t care for that Bachelor anyhow. When they get one that I like? OK.” I hope she likes Des because all indications are that she’s the next Bachelorette. I would’ve gone with AshLee there. She’s easily the best hot, obsessive, uber-organized alien cyborg for the job.