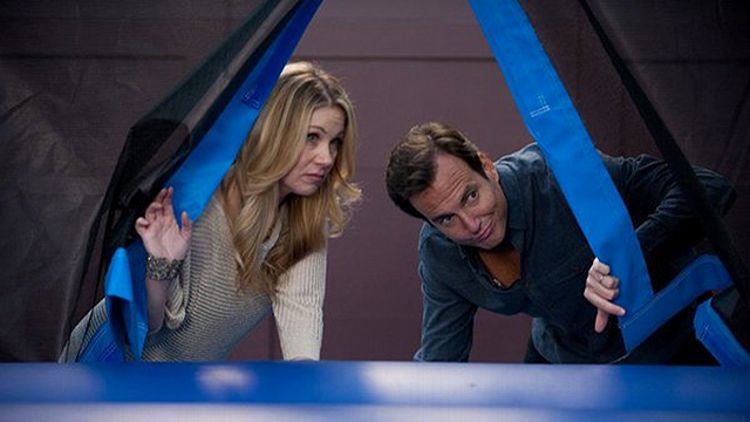 One of the most famous Monty Python sketches is the one in which a hapless consumer attempts to return a recent purchase to the pet store. The bird, you see, is dead — but the shop owner argues it’s just resting. But when shouting and shaking fail to rouse the feathered friend, the owner changes course: The poor bird is just stunned! And what’s more, it’s the customer’s fault for carrying on so loudly! It goes on like this for a while. Mustaches and the commuter train to Ipswich become involved. Eventually, the police are called on account of everything getting a bit too silly.

It’s funny the lengths people will go to, to deny the obvious — much, much funnier than NBC’s ill-fated comedy Up All Night ever was. The show — starring Will Arnett and Christina Applegate as harried hipster parents, and Maya Rudolph as someone cut and pasted from a completely different sitcom — has been reinventing itself almost from the start. The insular family satire that creator Emily Spivey had successfully pitched, written, and shot was, in the wake of Bridesmaids’ killer box office, reworked to include a talk show element with a larger role for Rudolph. Then, in its second season, the talk show was canceled and a heretofore unseen — and undeveloped — brother arrived. Finally, the series was taken off the air late last year to be completely reworked as a multi-cam comedy with a live studio audience. Then Spivey quit, quickly followed by Applegate. The episode order for the multi-cam redo shrank from four to one. Will Arnett took a role in a CBS pilot from Raising Hope’s Greg Garcia. And all the while, NBC insisted there was nothing to see here, even as impossible — even by NBC standards — stories began to circulate about how Lisa Kudrow was already waiting in the wings, eager for some of Applegate’s stay-at-home sloppy seconds, and that Up All Night’s reinvention involved revealing that the show we’d been watching was actually a sitcom within a sitcom. Up All Night wasn’t canceled or even in trouble, went the official line. With so much money invested and so much talent under contract, how could it be? It was merely pining for the fjords.

It’s been clear to anyone with a TV for months, if not longer, that what NBC had on its hands was a dead parrot. But it took Michael Schneider’s excellently reported feature this week on TV Guide to stick a fork in the show’s plumed back. The story is so juicy, so dripping with hubristic lunacy that you really need to read it for yourself. The details of how a fine idea was slowly transformed into a terrible reality are truly incredible — this is the “Microsoft Designs the iPod” of contemporary network nonsense. The last few weeks, when executive producer Lorne Michaels was pounding on the corpse’s chest like one of those overdramatic doctors in an ABC drama, are even crazier than we could’ve imagined. According to Schneider, among the ideas actually talked about by people paid to talk about this stuff for a living were:

Seriously. Go read it. I’ll wait. It’s the sort of corporate creative clusterfuck that leaves you wanting to stare at a wheel for half an hour just to remind yourself what a good idea actually looks like.

OK. Done? I know, right? I wasn’t kidding. But here’s the thing: The biggest problem isn’t what happened at the end of Up All Night. It’s what happened at the beginning. Lest anyone forget, the show was never very good. It was a small bore of an idea elevated far beyond its station by the toxic cocktail of talent, power, and cluelessness that fuels nearly every decision that happens between Pasadena and Playa del Rey. Even a longtime critic of the show like me can admit that it didn’t need to go this way. I mean, it’s more than possible that, in the hands of a clever writer like Parks and Recreation vet Spivey, a sitcom about stressed-out yuppies forced to actually care for the human infant they’ve conceived could work; that the comedy wouldn’t appeal only to smug marrieds living in similar situations in Silver Lake and Brooklyn; that a show built around rich-people problems wouldn’t be immediately compromised by stakes smaller than those carried by a vampire-hunting dwarf.

OK, maybe I was never going to embrace a show like this. But the problems only escalated because of undue expectations. Lorne Michaels is a comedy rainmaker and when he picked the project, he pricked up ears all over town. With his name attached — and, eventually, those three starry leads — there was almost no way Greenblatt could pass. And the initial press and ratings made it seem, temporarily, as if he had done the right thing. But, as Schneider reports, the behind-the-scenes tinkering had started almost immediately. Spivey went along with the first change — Rudolph as scenery-sucking Oprah-lite — because she wanted her show to work and saw it as the best chance of working within the system to make it happen. But the thing is, everyone wanted the show to work. And as that now-infamous amateur painter in Spain could tell you, at a certain point, all the good intentions in the world can still leave you with a very, very bad result.

By the end, when Up All Night was desperately ginning up ways to camouflage the horrible, judgey neediness of its main characters with soft-rock montages of sack races, and the inexplicable glass vase filled with lemons on the Brinkleys’ kitchen table started to resemble a cart full of oranges in The Godfather, it was more than clear that this was what happens when a series, even a poorly conceived series, loses its vision completely. There’s no secret formula for good shows, but there’s definitely one for bad shows, and neglecting to develop a strong central voice with a clear point of view is pretty much it. No one dislikes Whitney more than me, but it’s a much more successful show than Up All Night ever was; at least, like Janet Jackson, it’s nasty and it knows it.

I feel bad for Spivey, but she clearly knew this was no longer her show. It wasn’t anybody’s show. Up All Night was an empty vessel, what happens when forward momentum meets a CB2 catalog. It was a baby drowned in consensus-seeking bathwater. And although NBC may still be loath to admit it, Up All Night is now well and truly bereft of life. It’s kicked the bucket, shuffled off this mortal coil, run down the curtain and joined the bleeding choir invisible. As John Cleese would shout, this is an ex-sitcom.

Filed Under: NBC, NBC Follies, Sitcoms, Up All Night, Will Arnett