Emergency Preparedness: ‘San Andreas’ Predecessor Miniseries ‘10.5’ Offers Life Lessons for When the Planet Cracks in Half 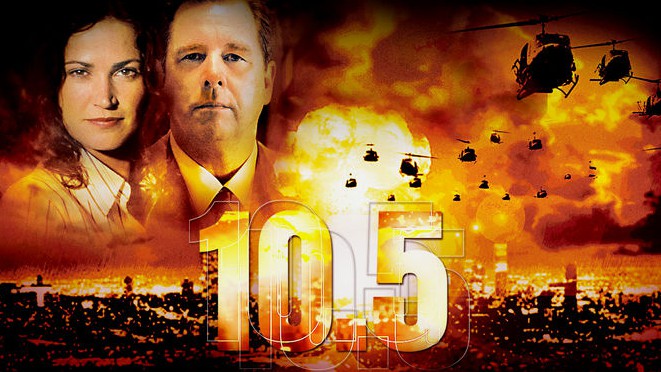 Los Angeles mayor Eric Garcetti would like the forthcoming surefire earthquake blockbuster San Andreas to galvanize his city into fits of disaster-prep planning, and this is not the worst idea he’s ever had, especially if you take it quite literally and assume he just means “be more like Dwayne ‘It’s Just Dwayne Johnson Now’ Johnson at all times.” All Angelenos — and all human beings who have ever lived, really — would do well to model their life paths at least in part on that of The Rock. But is this a realistic strategy for everyday folks? The Rock has accelerated at such a great rate to a higher plane of existence than the rest of us that trying to imitate him might be a little bit like trying to learn a dance routine from the sun. You know it’s moving, somewhere in all that blazing brilliance, but you can’t pick out the steps before your eyes melt out of your skull.1

Garcetti has a point, though. Preparedness packets are tossed aside and forgotten, PSAs tuned out, warning billboards driven by without a second thought. But choices dictated by popular media are absorbed quickly and stick with us. There will never be a surging wave of babies named for great FEMA chiefs in history, but we will one day live in an America with a Supreme Court justice named iCarly. And if the mayor wants a pop-culture-induced wakeup call, he needs only to reach back to his early years on the city council for the groundbreaking 2004 NBC miniseries 10.5 and its 2006 follow-up, 10.5: Apocalypse. Where The Rock is now so otherworldy a personality, so far removed from being A Regular Person to ever emulate, 10.5 features an absolute murderer’s row of affable television personalities, an early-aughts time capsule populated by characters who are all willfully terrible at at least one crucial relationship in their lives.2 Who among you can’t see yourselves intentionally diving into at least one of these emotional fissures during an unprecedented national crisis, and learning a little something about life and love along the way?

Delaney’s science “saves the day” in both movies, with a little help from her dad (Frank Langella, playing a dude named EARL HILL!) in the sequel. There are quotation marks around “saves the day” because a big chunk of California becomes an unintended island at the end of the first one, and North America is bisected in the second one, but her warnings evacuate a lot of people and avert a couple of nuclear disasters, so … it’s a toss-up? Here is an example of one of their cute arguments: Cubitt says “You’re too focused!” and Delaney retorts “I will try to be less competent!” Later on, at a lakefront that is being enveloped with toxic gases released from beneath the earth, she badgers him repeatedly for the location of gas masks inside his car, a smallish space it would not take long to search through her damn self. He dies in the sequel, buried in his helicopter under a torrent of boiling water from Lake Mead during the collapse of the Hoover Dam, which maybe could’ve been prevented had he been a little more … focused.

10.5 Life Lessons Nos. 2 and 3: “Basketball humor can power you through any crisis” (presented by U.S. President Beau Bridges) and “Try to tell your kids you love them before climbing into your deathbed” (presented by FEMA director Fred Ward).

Right, did I mention Beau Bridges is the president in this universe? He and Fred Ward like to play one-on-one hoops together, which is great for both cardio and expository purposes:

“I’ve been in your head since Harvard!”

“Just because we’re old roommates, you think you’ve got me!”

Their enmity is entirely based on the basketball court, making them one of the healthiest couples in either miniseries. Ward dies at the end of the first movie, pinned beneath a nuclear warhead in a hole in San Bernardino, because the bright idea of Delaney’s that fuses the San Andreas fault and stops the “quakestorm” involves Armageddon-ing (the romantic comedy, not the Biblical event) bits of California to make the earth beneath it so hot that it would all kind of melt together. (There is no animal cracker sex.) Ward gets patched through to his son as his life force ebbs, and says, “I need you to be strong right now.” Or, more specifically, “I need you to be strong right now,” he says to his trauma-surgeon son whom he summoned from the emergency triage tent where said son was performing a series of life-saving procedures.

The first 10.5 turns the sullen teenager trope on its head by having the dad act more of a fool than his only child at every turn. “You’re going camping dressed like that?” he asks as she exits the house wearing … jeans and a T-shirt, albeit one that’s cut a little short. She appears to be carrying a denim jacket and she even has a fanny pack on. LAY OFF, DAD. Shortly thereafter, he criticizes her for needing a pee break less than an hour into their road trip. Later on, in a dust storm, he permits his asthmatic teenage daughter to exit a sealed car and follow him onto a collapsed bridge. The General Lee, if given human hands to change diapers, might have been a better parent.

10.5 Life Lesson No. 5: “Timing is everything.” (Presented by Ivan Sergei and Dulé Hill as surgeons who are great at saving lives and bad at their personal lives.)

There are no Shondawear color-coded scrubs to denote which one of them is the boss, but they’re both big on behaving like manchildren. Sergei is estranged from his dad, who happens to be Fred Ward, who shut him out of his life after Sergei’s mother died. Sergei waits until Los Angeles itself is hit with a quake to confront his FEMA-directing dad about their relationship. This is definitely the time to bring that up! Hill has bought a Porsche without consulting his wife, who wants a new house for them and their two growing kids, and right when you’re all set to take her side, the wife calls and accuses him of being self-centered when he says he didn’t hear about the quakes, which might be because HE IS WALKING OUT OF A SURGERY IN WHICH HE JUST SAVED A PERSON’S LIFE. Say this for 10.5: It is steadfastly dedicated to making characters of both genders equally unreasonable.

10.5 Life Lesson No. 6: “Somebody always has it worse than you.” (Presented by Rebecca Jenkins as Governor Carla Williams and Erin Karpluk as her long-suffering aide, Rachel.)

A lot of this movie is set within the state government of California as it navigates the crisis. Jenkins is Cuoco’s mother and estranged from Schneider, and is trying to coordinate disaster-relief efforts while worrying about both of them being lost on their camping trip. But at least she’s not having Karpluk’s day, which begins with Rachel arguing with her husband because she doesn’t want kids. “It’s never gonna be the perfect time, Rachel.” MAYBE THIS IS NOT THE TIME FOR THIS SPEECH, JIMMY — WATCH THE NEWS AND BE OF USE, LIKE RACHEL, WHO IS SHIELDING THE GOVERNOR FROM FALLING DEBRIS WITH HER BODY. Karpluk’s character dies in one of the day’s earthquakes, paralyzed from the waist down and in agony, but not before asking the governor to tell her garbage husband she’s sorry.

10.5 Life Lesson No. 7: “‘I thought I was protecting you’ can only take you so far.” (Presented by Barbara Eve Harris and Garcelle Beauvais as the new FEMA director and her daughter, respectively.)

The Apocalypse sequel miniseries dispenses with a lot of the interpersonal toxicity in favor of just throwing every other kind of natural disaster at America at the same time, all allegedly triggered by the “quakestorm.” Harris takes over after Fred Ward’s death and worries about her daughter, another FEMA agent who lost two colleagues in the field and remains haunted by the incident. But this is 10.5, and a warm mother-daughter bond does not save Harris’s character from having to make weird decisions like not telling her daughter the guy she’ll be working alongside during the disaster lost a cousin in that same operation.

10.5 Life Lesson No. 8: “Sometimes loose cannons get results, and sometimes they get buried alive in elevator shafts.” (Presented by Dean Cain and Oliver Hudson as renegade firefighter brothers.)

Cain is a maverick! You can tell because people call him that! He goes into buildings that are falling down to look for survivors, against orders! He says things like “I thought I was supposed to save other people’s lives around here, not my own!” and his boss has to patiently explain to him that if he dies, he can’t save more people. Of course Cain is the one who ends up dying to save Hudson’s pregnant wife (Carly Pope!). Of course he is.

In 10.5 Apocalypse, the filmmakers dispense with the split-screen action device but add Tony Almeida. I guess as long as they have some kind of talisman from 24, they feel emotionally secure? And I guess to keep him feeling at home in his role as token 24 import, they do terrible things to the people he loves! Bernard’s parents live in Houston, which is about to be leveled by an encroaching fault line and then by the ocean, and he’s like, “Mom, Dad, get out of town and come stay with me or one of my siblings,” and they’re all, “Oh, we don’t want to be a burden,” and then quite literally just curl up and die, like that one couple on the Titanic in their cabin bed.

These are the people in your neighborhood! It’s a Mr. Rogers wonderland of folks from all walks of life, complete with tiny-ass trains:

These stars, truly, are just like us: They act pigheaded with their fellow man, right up until the West Coast is devastated by a series of cataclysmic earthquakes. And then they make up just long enough to come together as a species, only to see the sequel throw up volcanoes all over the Pacific Northwest and the Gulf of Mexico flow into a new fault that divides the country in half.3 You can’t be The Rock. I can’t be The Rock. None of us can be The Rock. Perhaps it’s better to put aside our dangerous The Rock fantasies in such moments of crisis and see ourselves as we actually are: like the cast of 10.5, mostly unlikable and fighting for our lives.